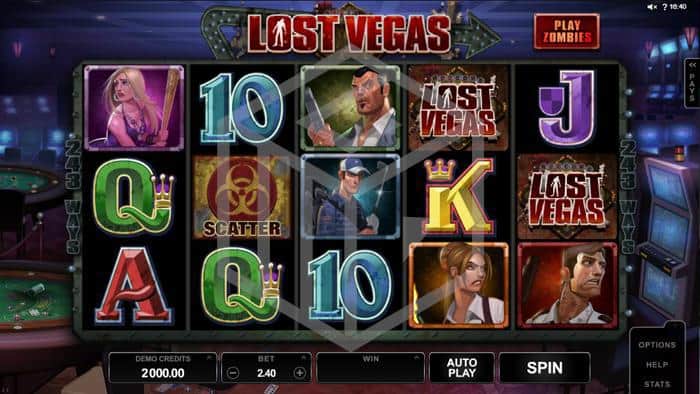 Lost Vegas has a strong theme and some atmospheric graphics. Once again the façade you see is based on which mode you have chosen to play in (you can switch between Survivor and Zombie mode whenever you like). Choose Zombie mode and the scene will be set on the deserted streets of the Las Vegas strip, whereas in Survivor mode you’ll be making your way through an equally deserted, dimly lit casino. The theme appropriate background music adds to the tense, eerie atmosphere. In both modes the five low value symbols are made up of playing cards 10, J, Q, K, and A, while the five higher value symbols differ by mode; unsurprisingly in Zombie mode they consist of Zombies, and they come in the form of a singer, a tourist, a bride & groom, a nurse, and a Zombie Elvis, while in Survivor mode they take the shape of regular men and women. The wild is a Lost Vegas sign, and the scatter is a circular hazard symbol. 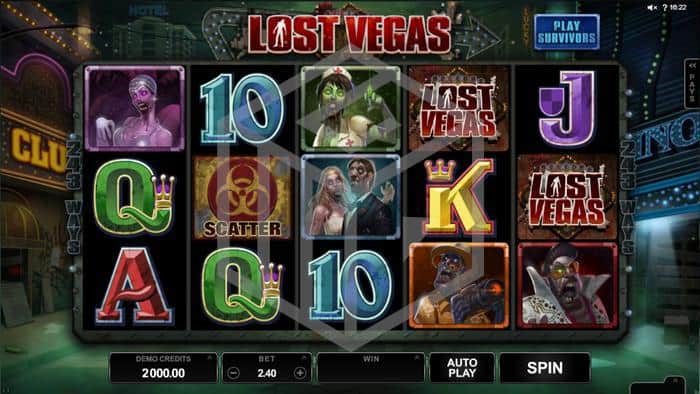 This randomly triggered feature can occur in both modes after any losing spin and is heralded by the appearance of a huge Zombie fist punching through the bottom of the game board clutching a wad of cash which will then translate into a randomly sized cash win.

Another random base game bonus which occurs in both modes after any losing spin, the ‘Blackout Bonus’ shows a pair of night vision goggles scanning the reels to reveal a cash prize. Also, if any scatter symbol hits a reel during the Blackout Bonus it will automatically trigger the Free Spin bonus game. 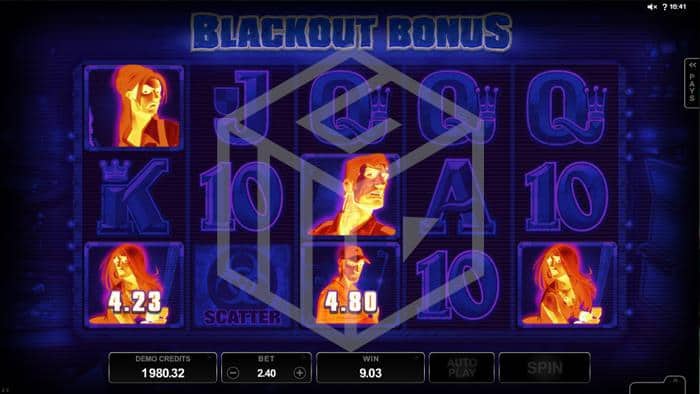 Both are triggered by hitting 3 hazard scatter symbols.

When a stacked Zombie character lands on a reel, that reel will become infected and for the remainder of the spins any wild landing on the infected reel will become stacked. The feature ends after all 5 reels have become infected.  Until then you keep spinning and bigger and bigger potential wins will be possible as more and more reels eventually offer stacked wilds. If you reach 50 spins without infecting all 5 reels your spins will end but you’ll receive an additional cash bonus.

Our Thoughts on Lost Vegas

This is certainly one of Microgaming’s better efforts, combining a popular theme with some great cartoon film graphics and an interchangeable game where you can ‘switch sides’ at your leisure to enjoy different characters and different features. As it is a “pay every way” slot you will also see a lot of wins during the base-game to keep you interested – although of course the average amount you win will be significantly lower than on, say, a 20 pay line slot. Although it’s somewhat true of most games, Lost Vegas is definitely a game where any major win is super likely to come from one of the bonus rounds. Nevertheless, overall this is a solid effort from Microgaming with some unique features.