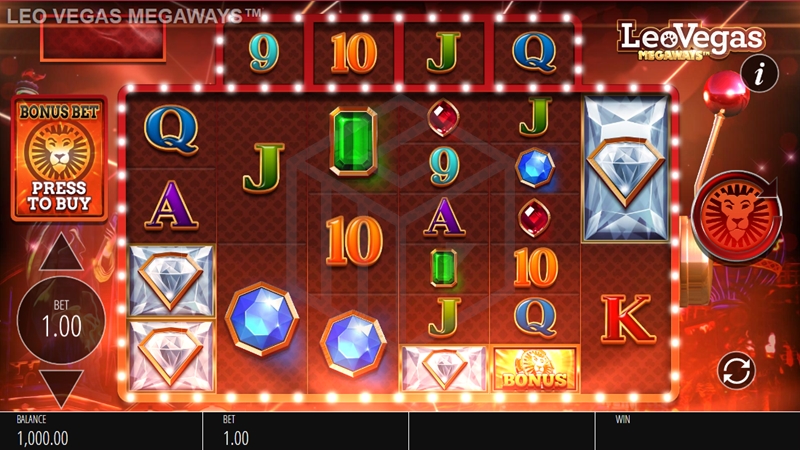 Using LeoVegas signature colours and logos, the backdrop depicts the bright lights of Las Vegas at night. Brightly lit world-famous casinos beam animated strobe lights across the night sky, while the game board sits front and centre. The game board is framed to resemble a Vegas one-arm bandit slot with the golden-arm often used on the LeoVegas website attached to the right-hand side of the board. The soundtrack is a funky, upbeat number with a touch of 70’s disco about it.

The symbols are fairly standard, with the low-value symbols represented by the standard 9-A royals. The high-value symbols are all gemstones; sapphire, emerald, ruby, and diamond. The diamond is the big payer, with 6 in a row worth 50x the bet size. The wild is a white ‘W’ in a blue surround, and the scatter is the LeoVegas lion logo. There is also a mystery symbol represented by the lion paw print found inside the ‘O’ in the standard LeoVegas livery.

LeoVegas Megaways™ benefits from cascading symbols with reaction wins in both the base and bonus game, as well as mystery symbols. There is also a scatter triggered free spins round with increasing win multipliers. There are also two buy-a-bonus options; free spins and a Megaways™ Reel Bet.

The lion paw symbol acts as a mystery symbol. These usually fall in abundance and will all transform into the same randomly selected regular symbol at the conclusion of the spin.

During free spins, each win landed will increase the win multiplier for further wins by 1x. Once again, there is no limit to the number of win multipliers up for grabs.

As well as triggering free spins via scatters it is also possible to use the buy-a-bonus button. This costs 100x the chosen stake. Buying into free spins is akin to landing 4 scatters, meaning that you will spin the free spins wheel to land a maximum of 15 initial spins.

The buy-a-bonus button also offers a second bonus. The Megaways™ Wheel Bet costs 20x the chosen stake to spin a different free spins wheel. The wheel brings in two awards, a number of spins and a minimum number of guaranteed Megaways™. It is possible to win up to 10 spins with up to 117,649 guaranteed Megaways™ on each spin. There are no win multipliers available during this feature. Both buy-a-bonus features also have a slightly higher RTP of 97%.

Our Thoughts on LeoVegas Megaways

While there are no huge innovations here, LeoVegas Megaways™ is still an absorbing game with huge potential. There are also some small but significant differences to similar slots. The free spins wheel, for example, is a nice touch and can result in starting the bonus round with a 10x multiplier and 30 free spins – a definite recipe for a big win.

Also, the option to buy into an otherwise unavailable bonus such as the Megaways™ Reel Bet is a worthy innovation. Any innovation to a well-worn formula is worthy of note, and at a cost of just 20x, the bet size it is certainly worth a punt. I can’t say I did very well out of it during testing, but the 97% RTP doesn’t lie and beginners luck goes both ways, especially on a highly volatile slot such as this.

All in all, the LeoVegas Megaways slot is hardly reinventing the wheel. It is still a superb game and has great potential, as well as a couple of nice innovations.  Megaways™ armoury.