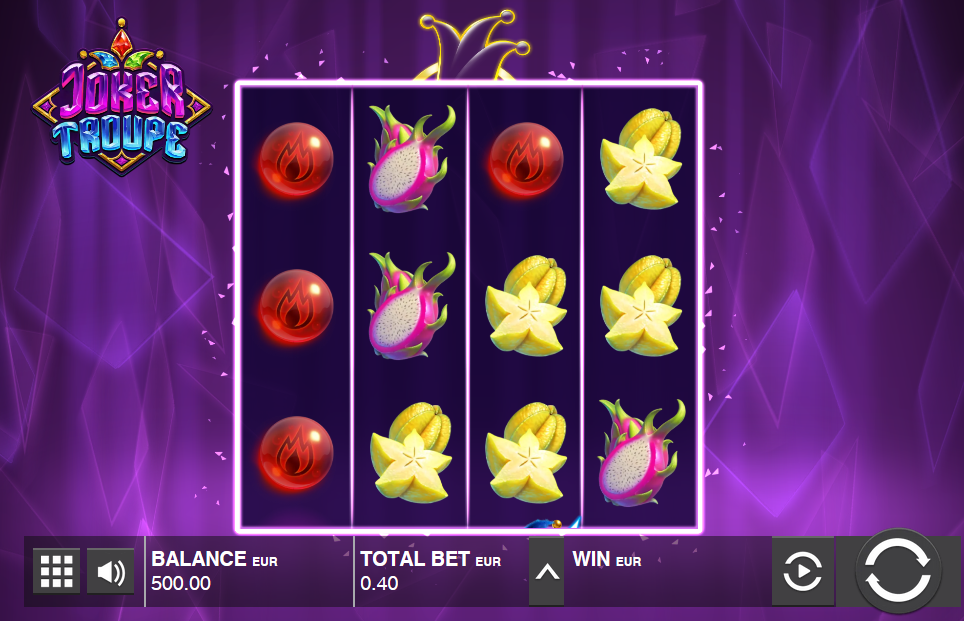 The design here is classically simple, almost retro with the plain background, no-nonsense small reel set, and minimal effects. The first impression is that it’s not dissimilar in style to the raft of Play‘n GO games released over the past couple of years (Fire Joker, Star Joker, Inferno Joker etc). The square reel set has solid purple reels framed with a simple white neon border with specks of shimmering neon debris floating away from the borders. The lighter purple background has transparent simple diamond and rhombus shapes floating elegantly around the screen. In the background, a tranquil trance tune accompanies the play.

3 Blue Jokers trigger the Blue Joker Feature. The background swaps to blue and the board shrinks a little, but initially remains a 4x3 reel set. For the duration of this feature, the only symbols which can land are Blue Jokers (which have, incidentally, now transformed into Blue Joker hats), and Red Jokers. All the other symbol spaces continue to spin.

3 respins are initially awarded for the Blue Joker feature. However, whenever a blue hat or a Red Joker lands, the respins are reset to 3, and the symbol remains sticky on the reels. 3 symbols landing on the board add a new row to the reel set and increase the multiplier value of future blue hats. The multiplier levels are 2x, 3x, 4x, 5x, 10x, and 25x. 3 spins completing with no new symbols landing ends this bonus round. 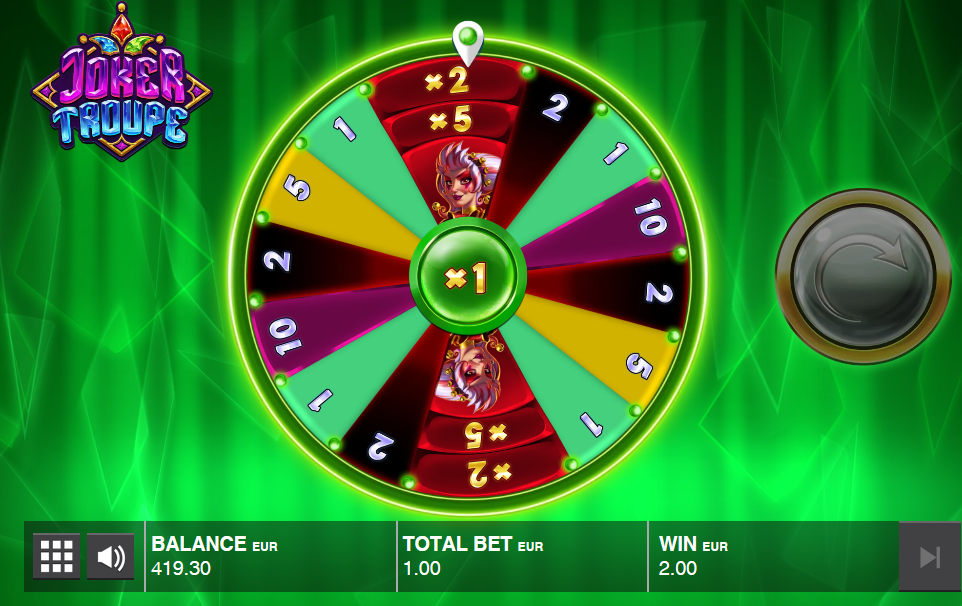 3 Green Joker symbols trigger the Green Joker Wheel. The wheel is split into 14 segments, 12 of them have numerical values (with 1, 2, 5, or 10). The other two are called “Booster Segments” which have 3 levels; the first time you land on it a 2x win multiplier is added to the centre of the wheel, the second time is a 5x multiplier, and the 3rd time is the Red Joker. Booster Segment multipliers and multiplier together when more than one land during the round. Landing on a Booster segment also awards a respin. Landing a numerical value multiplies your current stake by that number for a payout. Landing on a numerical segment also awards a respin. A multiplier in the centre of the wheel increases the numerical segment win accordingly.

There is no set number of free spins, instead, a 20 second countdown can be seen above the Red Joker reel set and you take however many spins you can fit in during the time available. 10 further seconds are added when you land enough Red Jokers to fill the Red Joker meter. Each time the meter fills and the timer is reset, the reels spin a little faster. These are called Hypermode™ spins, a Push Gaming innovation. The potential wins here are huge as there is technically no limit to the number of timers resets you can be awarded.

Our Thoughts on Joker Troupe

Joker Troupe may look a little simplistic at first glance but looks can be deceiving as this is yet another powerhouse of a slot from Push Gaming. The three Joker features are all winners, and while we’ve seen features similar to those awarded by the Blue and Green Jokers, the Red Joker with Hypermode™ spins are an exciting new development. All three can pay out well, although alternately all three can pay out next to nothing. I didn’t actually mind this though as it meant the features triggered quite often.

With a possible 25,000x up for grabs, a sublime soundtrack, and some fantastic innovations, this is one slot we can’t recommend highly enough. In my opinion, Joker Troupe should be immediately added to the list of brilliant offerings from Push which include the likes of Jammin’ Jars, Fat Santa/Rabbit, and Razor Shark.