The fruit symbols in order of value go from Lemon and Orange to Plum to Cherry to Melon, with the only non-fruits (Bells and Red Sevens) representing the highest value symbols with a top prize of 300 €62,500 possible for a full board of Sevens played at the highest stake. The only other symbol to appear is the Joker, and to reach the Jackpot Spin a Joker symbol must appear on each of the five reels at least once during a single spin. The design is, as previously mentioned that of an old-school fruit machine, but, as tends to be the way with Yggdrasil games, the graphics and bold, sharp and very slick.

With an average win of almost €2.4m which has dropped, on average, every 20 weeks, Joker Millions progressive Jackpot is, of course, the most coveted of the game’s special features. However, substantial sums can also be won via the mystery spin feature during the jackpot game, as well as the freeze & spin and multiplier features which occur during normal gameplay. 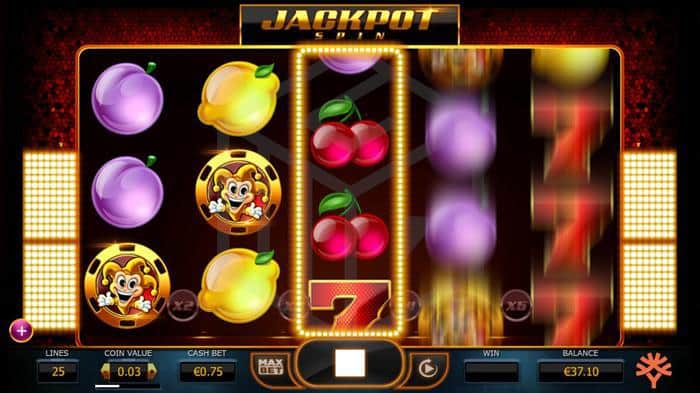 When at least one Joker symbol lands on each of the five reels during any single spin, the Jackpot spin is activated. Before the Jackpot spin begins each Joker symbol which has already landed is assigned a mystery value of between 5-1000 coins which form part of an accumulative win, and the symbols automatically become sticky. If another Jackpot symbol hits the board during the Jackpot spin not only will its ‘mystery’ value be added to the accumulative win, but the player will also receive another spin. The feature stops if no new Joker hits the board on a spin. If a player manages to fill the entire board with Joker symbols then the progressive Jackpot is awarded. The Jackpot begins at €100,000 up to a possible €3,000,000. 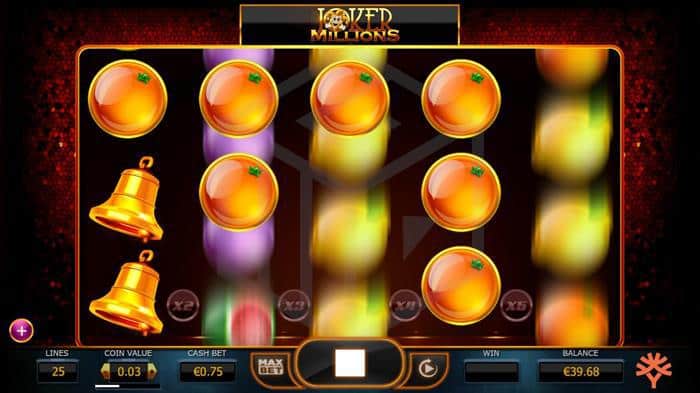 During regular gameplay ,if three matching symbols appear at least once on the first three reels then a re-spin is awarded, while the matching symbols become sticky. Re-spins continue as long as a new matching symbol hits the board with every new spin, meaning that initially small wins can become quite substantial.

Wins accrued during the freeze & re-spin feature really start to add up if a player manages to hit the column multiplier. The multiplier takes effect if the first two columns fill with matching symbols – this will immediately trigger a 2x multiplier. With each additional column that is filled an additional multiplier is activated up to a maximum of 5x for a full board, meaning a potential maximum win of over €300,000 from a single spin.

Our thoughts on Jackpot Millions

Despite the lack of a hugely creative theme, Jokers Millions is surprisingly fun to play. The design and graphics are smooth and aesthetically pleasing, and the number of features and the regularity with which they come into play mean that you are consistently engaged with the game. Also, for what is a relatively low volatility slot, there is also the possibility of winning a truly life-changing sum of money from a single spin with the progressive jackpot, meaning that Joker Millions offers its player the best of both worlds.