The game board takes the form of a large stone temple with a pair of stone jaguar paws with golden claws clasping either side of the base of the temple. The background shows the mountain ridge of Machu Picchu rising up into the starry sky. The Incan theme is supported by a seductive, percussive soundtrack.

The four low-value symbols in Jaguar Temple are represented by the four card suits (diamonds, spades, hearts, and clubs) depicted as colored gemstones, with the premium symbols taking the form of Incan birds, dogs, rabbits, and fish. The highest value symbol is the Golden Jaguar – the Jaguar being revered as a powerful deity in Incan culture. Unlike the other regular symbols, the Golden Jaguars payout if you land three in a row on any combination of reels. Land five in a row during regular gameplay for a 50x win. Furthermore, on occasion, reels 2-4 slow and you have a chance of landing part or all of a giant 3 x 3 Golden Jaguar for a big pay-off. The game’s other symbols are of an Incan priest as the wild, and a circular bejeweled scatter symbol.

The colors are bold and the gentle clink of the stone-back symbols landing on the reels is a pleasing and slightly mesmeric sound. However, there is nothing especially original or innovative about the design of Jaguar Temple.

Jaguar Temple only has one bonus game, a free spin round, but with expanding wilds and an increased likelihood of landing the 3 x3 Golden Jaguar symbol the bonus game is considerably more lucrative than regular gameplay. 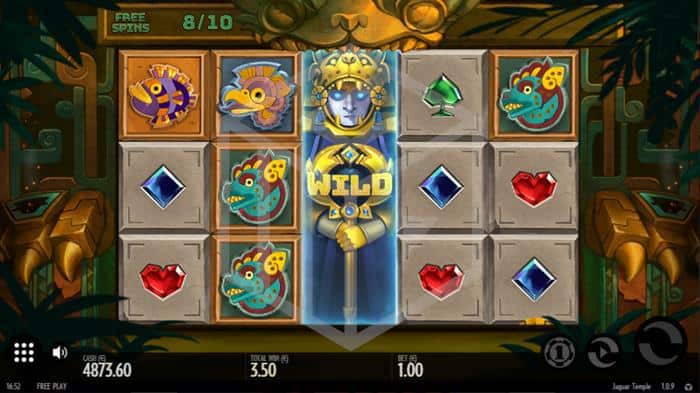 During the free spin round, the wild symbol becomes an expanding wild on the three middle reels, meaning that it expands to cover all three symbols in the column in which it appears.

Land three of more scatter symbols anywhere on the board and you are taken to the bonus feature and awarded 10 free spins (15, if you hit 4, scatters, 20 for 5). Extra free spins are awarded if you hit 2 or more scatters during the bonus game, up to a maximum of 40 spins. As mentioned, the expanding wilds can really boost your winnings here, as will the increased likelihood of hitting some part (if not all) of the 3x3 Golden Jaguar.

Our Thoughts on Jaguar Temple

While the bonus round has the potential for some really decent wins, it seems awfully hard to come by, and to be honest the distinct lack of action or features during regular gameplay on Jaguar Temple makes for a not especially riveting gaming experience. Confusingly, the game states that the maximum win per spin is 2,045 x the stake. This seems odd considering a full board of Jaguar symbols pays out 1,000 x. Does this mean that during free spins that the pay-out stops if you hit 2,045 x the stake? If so, this seems a very strange rule for Thunderkick to enforce. Saying that during a quite extended period of play I came absolutely nowhere near this level of win so perhaps it’s irrelevant that the max win is capped?