Ivan and the Immortal King

Play Ivan and the Immortal King on 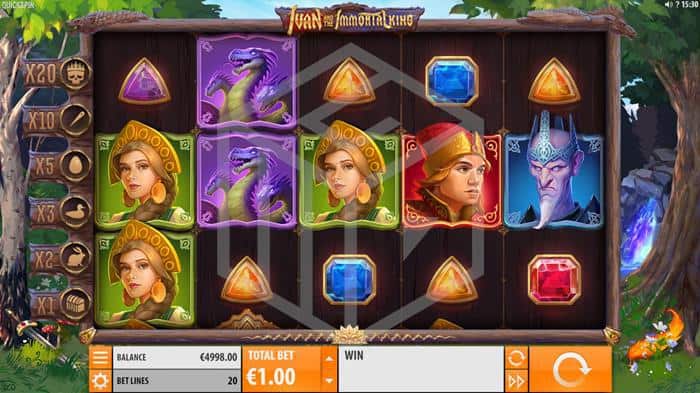 Quickspin has become quite adept at creating an enchanting fairy tale design and Ivan and the Immortal King is no exception. The game board has a wooden frame with carved creatures at the top two corners and golden clasps on the bottom two corners, as well as a progress bar carved into the left hand side of the frame which charts Ivan’s progress from the chest up to the hare, duck, egg, needle, and ultimately to the death of the Immortal King. The back ground in the base game is of a magical forest with trees all around (one with a sword or dagger at the bottom), and a mystical looking babbling brook to the right of the game board.

As with other Quickspin games the low paying symbols are coloured gems with purple, orange, and green the lowest paying, followed by blue and red. The higher paying symbols are all beautifully drawn folklore characters, namely a dragon, a wolf, a princess, Koschei, and Ivan himself who is the most valuable symbol with 5 on a pay line rewarding 100x the bet size. This sets the maximum win in the base game is a healthy 2,000x bet size as all symbols appear fully stacked on the reels. There is a golden wild symbol and two scatter symbols; the first is a bonus chest, necessary to enter the bonus round, and the second is of a gold coin engraved with a skull known as a ‘progress scatter’ which you’ll need to advance your progress in the bonus game.

The game comes with two features; Baba Yaga Surprise, which occurs both in the base game and the bonus game, and the free spin bonus round during which you can earn multipliers and additional free spins. 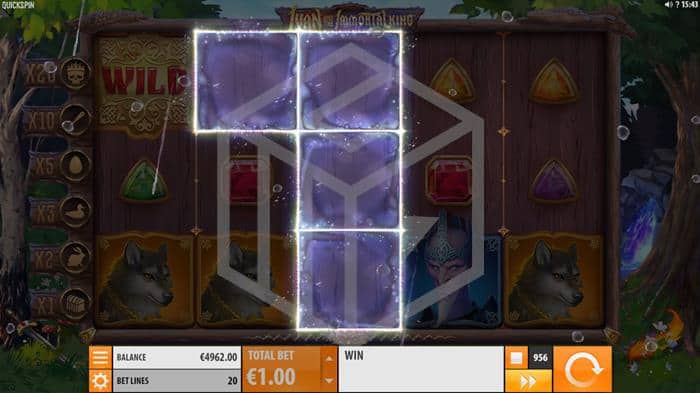 Baba Yaga is another folklore figure, a disfigured crone of a witch who flies around in a mortar who can help you progress through your journey. She can appear in both the base game and the bonus round. In the base game, she will hurl four frogs which will land on 4 adjacent symbols somewhere on the board. They will either reveal four identical symbols to guarantee a win or will reveal enough scatters to enter the bonus round (usually if you already have scatters on the board). Baba Yaga is more likely to appear in the bonus round where either one or more of the four symbols will turn into progress scatters or, as in the base game, all four will reveal identical regular symbols.

Free spins are activated by landing 3, 4, or 5 scatter symbols which will award 10, 14, or 18 free spins respectively. Also, land 4 scatters and not only will you get 14 free spins but you’ll also bypass the Chest level on the progress bar and start at the Hare level which also adds a 2x multiplier to all your wins during the bonus round. Land 5 scatters and alongside your 18 spins you’ll go straight to the duck level which adds a 3x multiplier. 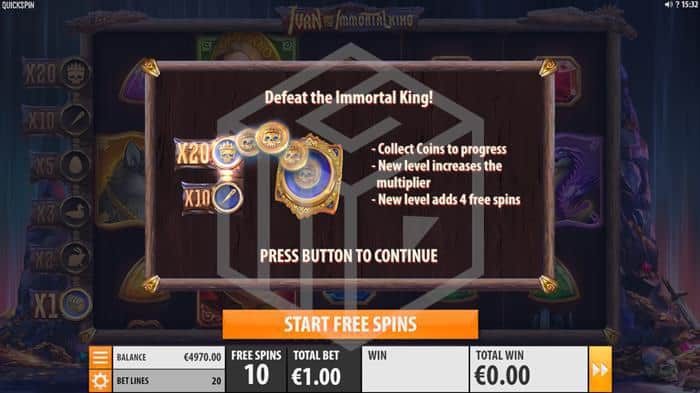 To progress further you’ll need to land progress scatters. For every three you land you’ll not only add an additional multiplier as you move up the levels but each time you reach a new level you’ll be given 4 additional free spins. Beyond the Duck level is the Egg level with a 5x multiplier, the Needle level with a 10x multiplier and finally the Dead King level which grants a 20x multiplier to all wins. Get to the top and land Ivan fully stacked on all reels and you’ll win 40,000x bet size which means a maximum possible single spin win of €4,000,000 betting at €100 a go. Ok the chances are beyond slim but we can still dream, right?

Our Thoughts on Ivan and the Immortal King

For a high variance slot, Ivan and the Immortal King has a decent balance of dead spins to feature spins, which certainly helps to keep your attention, although it does mean you ought to prepare yourself for some less than stellar bonus wins. Some players would prefer a slot with more dead or low paying base game spins in order to secure a higher average payout in the bonus round, so be warned that if this is you then perhaps stick to a game where more of the RTP is dedicated to the bonus round. However, the bonus round wins are still decent, and the chance to add multipliers and free spins at any time via Baba Yaga makes it all the more interesting.

Ivan and the Immortal King is yet another thoughtful interpretation of a piece of historic folklore from Quickspin, and one which we can highly recommend.