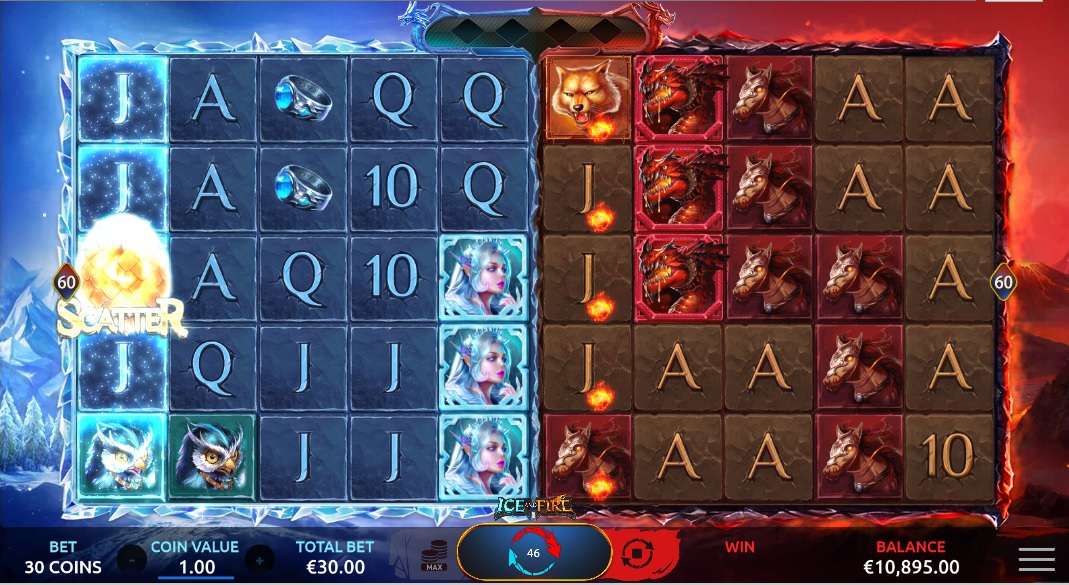 This is without a doubt a fantasy slot through and through, with the screen being divided into Ice on the left and Fire on the right. The background of the slot is also split in two with the icy side showing off some snow-covered mountains and trees with ice framing the reel-set too. On the fiery side of the game you will also see a mountainous landscape, but this time it's all dark and gloomy with a red-tinted sky and flames surrounding the reels. It can almost feel like you are in the middle of a Game of Thrones scene.

Because of the two different reel sets, there are a total of 20 symbols to look for in the base game. The low paying symbols are the standard card suits from 9 to A showing in blue on the icy side and in red on the fiery side. The symbols of higher value on the icy sideshow a ring, and owl, a tiger a dragon and the ice lady herself. On the fiery side, you will see a horse, a dragon, a wolf and an orb as well as the fire lady. Of course, the two ladies on each side of the reel set are worth the most, giving you wins of up to 53.33x your stake for 5 of a kind.

The symbol showing a mysterious looking book is the wild symbol of the game and aside from the typical function of being able to substitute all symbols except for the scatter, it has another function. Should one of these land on one of the reel sets, it will be duplicated to show on the equivalent position on the other set. The scatter symbol showing a dragon's egg will trigger the free spins game when 3 or more land on the reels. 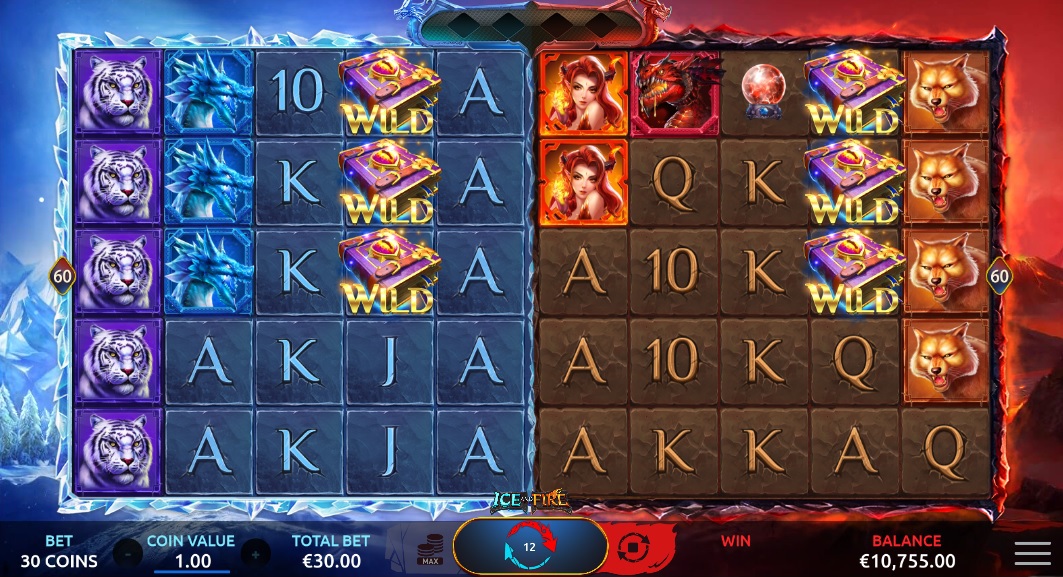 There are several different features waiting to be triggered in Ice and Fire, however, it is the dual-reel feature that is the main one to look out for. Aside from this, you will see cascading symbols, wild symbols, scatter symbols, multipliers and a second free spins feature.

This slot uses a cascading symbols feature which will automatically be triggered when you get a winning combination on the reels. The symbols that are a part of the winning combination will be removed, which will cause the remaining symbols to fall into the vacant spots. New symbols will then fall into the remaining empty spots on the reels. This feature will allow you to get new wins again and again.

The wild symbol of the game, showing a book with a dragon's eye will be the symbol that triggers this feature. Aside from being able to replace all other symbols except for the scatter, it will also be copied to the same position on the opposite reel set when it lands on the reels. The only exception is if a scatter happens to be in that exact position.

Should you be so lucky to get four or more consecutive cascading wins, you will activate the Free Games feature. Here you will be asked to pick between the ice dragon or the fire dragon, where each of them will be able to offer you 8, 10 or 15 free spins along with 100 or 150 extra wilds. This feature can also be re-triggered, which can result in you getting up to a total of 30 free spins.

This is the main feature of the Ice and Fire slot and will be triggered when you have collected three or more dragon egg scatter symbols. These can land anywhere on both reel sets. You will then receive 10 free spins, but any extra scatter symbols on the reels will reward you with an extra five spins, up to a maximum of 25 free spins.

Every following winning combination will increase the multiplier by x1, but what makes this feature even better is that there is no set limit to how high the multiplier can go. During this feature you will also be able to land more scatter symbols to receive even more free spins.

Our Thoughts on Ice and Fire

Ice and Fire is certainly a slot that looks good and seeing that fantasy is a popular theme at the moment, we are sure this game will be welcomed with open arms by many players. The soundtrack, as well as the graphics and effects, are all a big part of making this slot complete. However, we are still somehow left wanting more from a developer such as Yggdrasil who also seems to wow us.

The different features in the game are entertaining enough, but getting into the multiplier feature won't be an easy task. Once you are in, the multiplier without any set limit can result in wins up to 19 139x your stake. All in all this slot isn't bad and we expect many players flocking to this slot.