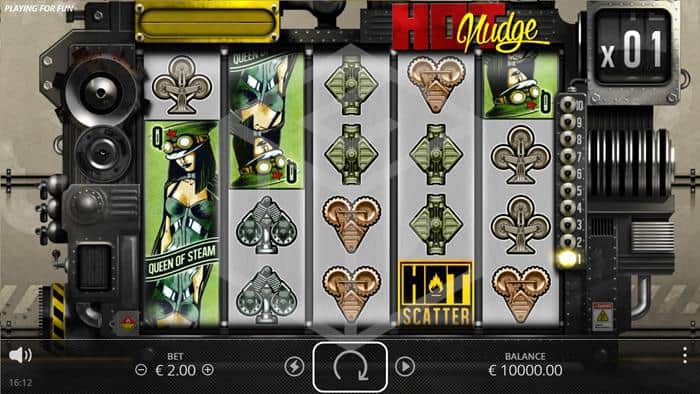 Hot Nudge’s design certainly stays true to its Steampunk theme, with the entire game board and its surrounds depicting a huge industrial, steam-powered piece of machinery which wouldn’t look out of place in a Jules Verne or H.G Wells novel. The ominous tones, creaks, and whirrs in the background complete the bleak industrial theme.

The symbols follow this pattern and even the low-value symbols, represented by the card suits (clubs, diamonds, spades, and hearts) have been designed to incorporate moving industrial parts such as cogs, and levers. As if to hammer home the theme the three higher paying symbols, which are each four rows high are called “Jack of Punk”, “Queen of Steam”, and “King of Diesel” and are all clad in befitting Steampunk outfits. The King is the highest paying symbol with 5 on a pay line awarding 10x the bet size – not a huge return sure, but with stacked symbols and multipliers (more of which later) these wins can add to some serious cash. The wild, which can appear on reels 2, 3, or 4, is another full-length Steampunk character, a younger female with ‘Hot Wild’ written across the bottom of the character on a red background which land with a flaming flourish on the reels. The game’s other symbol is the ‘Hot Scatter’, a single yellow square with ‘HOT SCATTER’ in black letters so as to vaguely resemble some kind of hazard symbol.

In the main game the ‘Hot Wilds’ and ‘Hot Symbol Nudge’ can land some hefty wins, and the free spin round triggered by the ‘Hot Scatter’ symbols can also pay high dividends.

In a similar mechanic to that found in games such as Push Gaming’s Wild Wheel, if any part of a ‘Hot Wild’ symbol lands on a reel it will automatically step up or down to cover the entire reel if any win is possible. For every step either up or down the wild has to make in order to cover the reel a 1x multiplier will be added. It is possible if all wilds land in this manner that up to a 10 x multiplier could be applied to any win. 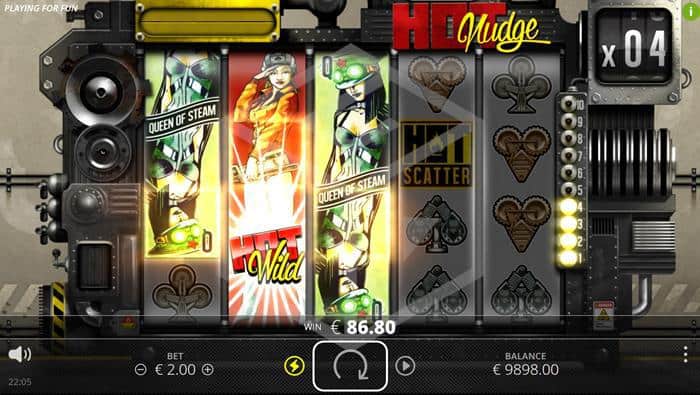 In the main game, whenever two of the same high-value full-length symbols land fully visible on the first two reels the Hot Symbol Nudge feature will be triggered. This will nudge any other instances of that same symbol to become fully visible on the remaining reels. This feature often leads to a big win. 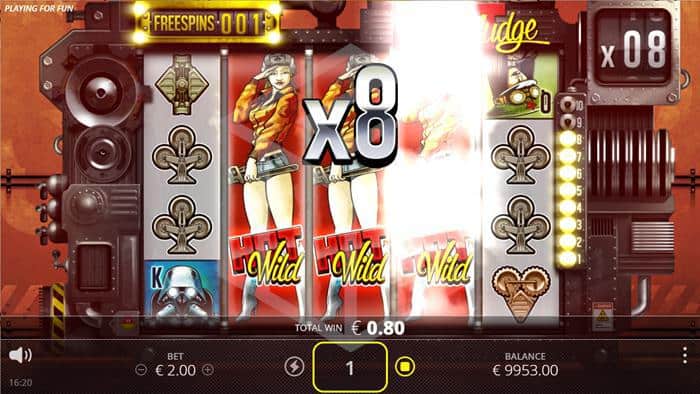 Our Thoughts on Hot Nudge

Having seen a few reviews of Hot Nudge I was surprised that a couple seemed quite negative. Personally, I found it a very entertaining slot with a consistent theme, some nice features capable of paying out some hefty wins, and some interesting graphics and animation. I guess the design isn’t especially ground-breaking, but in my opinion when it complements the game as well is it does in Hot Nudge then as far as I’m concerned it all adds to the experience. If this kind of design is added to a duff game (I’m thinking NetEnt’s Wild-O-Tron 3000) then sure, what’s the point? But I’m all for it here.

You know what to expect with a high volatility game, namely lots of unrewarded spins and the occasional feature, and that’s what you get here. However, none of the features were especially tricky to trigger, and while that may mean that occasionally those feature wins aren’t huge, neither were any of them especially stingy. All in all I thoroughly enjoyed this NoLimit City title and would recommend you check it out for yourselves.