Watch Nickslots bag a big 1,000x + win on Holy Diver Megaways when he least expects it. 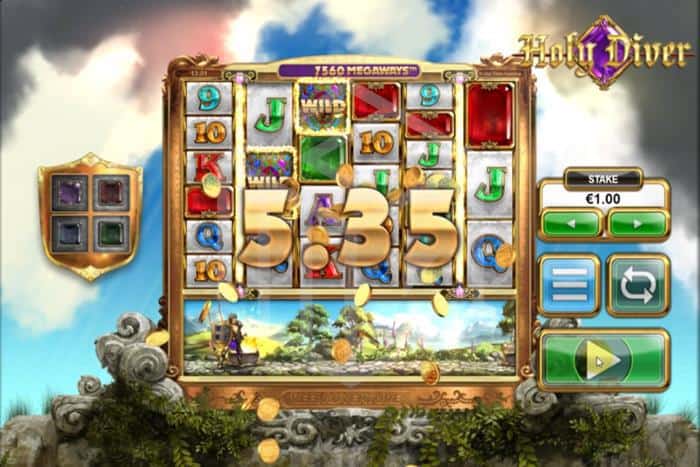 Visually, Holy Diver is not dissimilar to one of BTG’s classic Megaways™ slots from 2016, Dragon Born, especially the square gold-framed game board. The game board sits center screen on top of a carved stone structure that resembles the top of a gravestone. Their background reveals a blue sky leading up to some ominous looking rains clouds above.

To the left of the game board is a gold shield – the Shield of Fortune - with spaces to hold four different colored gemstones, and to the right of the gameboard sit the controls.

The low-value symbols are the standard 9 – A royals with the higher value symbols represented by Green, Blue, Red, and Purple gems. The highest value is the Purple gem which pays 15x the bet size for 6 across a pay line.

Below the game board, there is an additional screen approximately 2 symbols high which runs the full length of the board in which an animated Knight is running along a path kicking open treasure chests (more of which a little later).

In the base game, you can activate four different reel modifiers, and Holy Diver also has a great free spins round which comes with three different levels where each additional level adds wild multipliers to exponentially increase your potential wins. The free spin round is also where you’ll be given the chance to increase the ways to win up to a potential 586,789.

All the while you are playing the game the animated Knight is running along his path where he will encounter treasure chests (approximately once every 4 or 5 spins) which he will proceed to kick open. The open chests will then reveal one of four reel modifiers, which are:

Complete the Shield of Fortune by collecting all 4 colored gems from the treasure chests and you will be awarded 10 free spins. During free spins, which take place against a moonlit backdrop next to the sea, any gems which land on reels 2-5 will turn wild.

Also, the Knight will still be charging across the path below the game board but instead of coming across treasure chests to open he will be vanquishing foes with his sword.

Occasionally one of these cloaked enemies will reveal a diamond after being slain.

Furthermore, once you retrigger the bonus you will open up additional ways to win as after a spin a random number of symbols, once used, will disappear and be replaced with new symbols, thus creating extra ways to win up to a maximum of 586,789. Throughout the free spin round the song “Holy Diver” will play in the background. 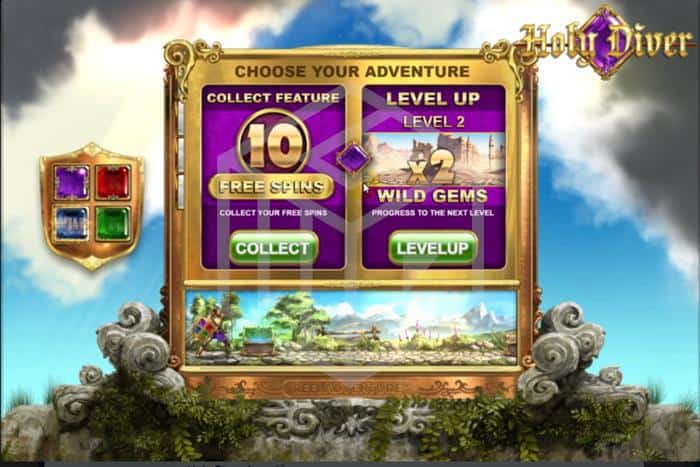 When you are awarded 10 free spins after filling the Shield of Fortune you can take the opportunity to decline the bonus round but instead move up a level and go back to the base game.

While levelling up will certainly increase your potential for a big win (and it also very marginally increases your overall RTP), be prepared to increase your volatility also as the instances of the Knight revealing gems from the treasure chests reduce dramatically with each level up.

While this may seem harsh, the potential wins are much higher when you consider that the multipliers come into effect, and whereas level one only offers a total 1x multiplier, hit wilds on reels 2-5 on level 3 and your win will be multiplied by 81x (3x3x3x3). If you manage to retrigger the bonus on level 3 and release up to 586,789 ways to win with 3x wild multipliers then you really can land a monster win.

Well, Big Time Gaming have done it again, they have engineered another truly innovative slot mechanic with Reel Adventure™ which creates even more action and makes Holy Diver even more immersive than many of its Megaways™ predecessors.

Exchanging scatter symbols for the Knight animation is a nice touch, and it is certainly nice to land a free spin round (at the base level) fairly regularly. Of course, this comes at a price also, with the biggest 6 in a row win being just 15x bet size compared to the higher volatility Megaways™ slots which pay around the 50x mark.

This isn’t necessarily a bad thing though as this will broaden the game’s appeal to those players who don’t particularly want a high variance affair and this game at the base level seems to be at the low side of medium variance.

The beauty of Holy Diver, however, is that the ability to level up immediately increases the volatility for those who don’t mind grinding it out in their quest for that elusive big win.

Of course, the fact that there are so many more ways to win doesn’t mean you will win more often, at the end of the day the RTP is the same is pretty much every other game released these days – but when it comes to action and entertainment, you just can’t beat a Megaways™ slot these days.

So, apart from the mysterious choice of name (perhaps the designer just loves that track?), we love everything about this new game from BTG.