Play Hit It Big on 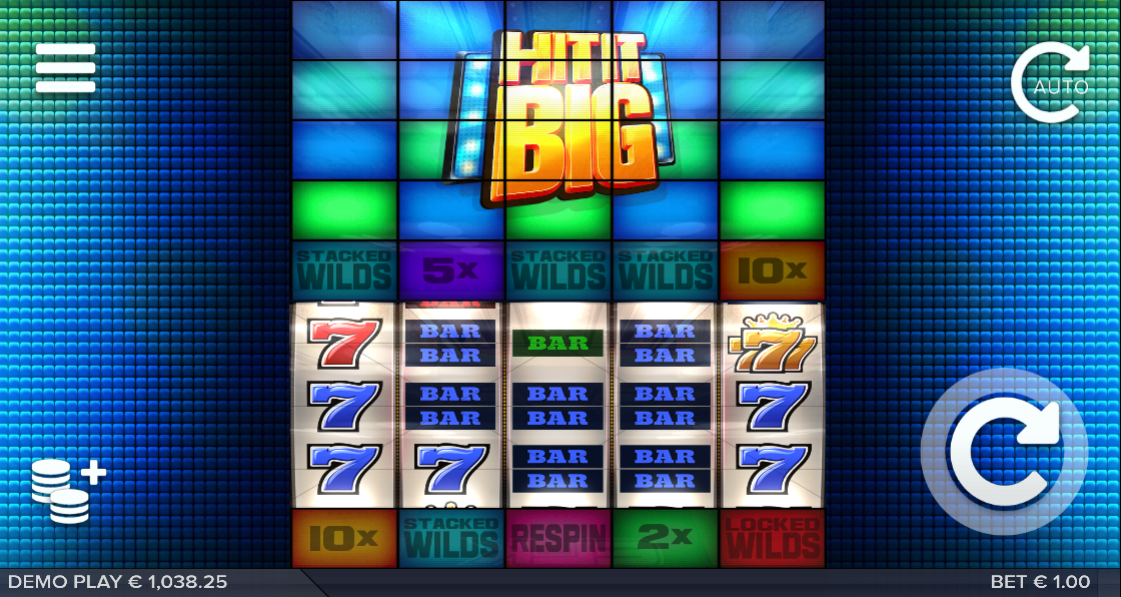 We all know what to expect from a retro slot; namely white spinning reels featuring symbols found on almost every slot machine in the 1980s. Although there isn’t a fruit in sight there are plenty of sevens and bars – the classic high paying symbols of the day.

The reels only take up around one-third of the gameboard, however. Directly above and below the 5x3 reel set are rows of neon flashing tiles which can unlock a selection of base game enhancers (more of which later). The top half of the game board is made up of several more rows of flashing neon tiles which intermittently change colour and on which the game’s game show like logo sits. This section of the board also flashes up if you land a base game enhancer, and also doubles up as the grid for the main bonus feature.

The base game contains a series of enhancers including respins, locked wilds, stacked wilds, and win multipliers. The main feature sees you play for big money on a prize-filled grid – but make sure you avoid the bandit!

This is where the strips of neon flashing tiles directly above and below the reels come into play. While the reels spin the tiles flash before each displaying an enhancer. If the enhancers at the top and bottom of a reel match then that enhancer will be awarded. The possible enhancers are as follows:

Landing 3 bonus symbols on reels 2-4 awards entry to the Hit it Big Bonus game. The game is played on the neon tiled 5x5 grid above the game board and has three stages – the outer square, the inner square, and the Hit it Big centre screen.

The neon tiles around the outer square of the grid flash intermittently with each containing a win multiplier. Hitting the start button will stop the flashing on a random tile and award the multiplier. The multipliers may take the shape of random prizes (such as you might ‘win’ in a TV quiz show i.e. a bicycle, a motorbike, a yacht etc.). Once landed on the square will reveal its multiplier and then turn into a ‘bandit’ with a red face a blue eye mask. If you land on a ‘bandit’ square the round is over.

There are also inward and outward pointing arrow squares. If you hit one of these you’ll either progress to the next stage (inward arrow) or move back a stage (outward arrow). The tiles in the inner square reveal bigger multipliers.

Reach the final stage and you are awarded one stop where the multipliers are guaranteed to be between 100x and 1000x the stake.

Our Thoughts on Hit it Big

There’s a huge appetite for retro slots, and in my humble opinion, Hit it Big is one of the best. I often find the retro fruity thing a little boring, if a little nostalgic. Here, however, despite the high variance and the small number of pay lines, there is plenty going on.

Although they aren’t massive payers, most of the base game enhancers aren’t too difficult to trigger, which if nothing else breaks the monotony of endless spins. However, the best enhancer (Locked Wilds) is very hard to come by, and unless you hit stacked wilds on the first couple of reels they tend not to amount to anything. Nevertheless, they provide an adequate distraction while you await the real heavy-hitter, the bonus game.

The bonus game is one of those which rarely totally disappoints. During testing, I hit several wins of several hundred times the stake, and a couple into four figures.  Beware though, the bonus lands (on average) once every 268 spins so are sure to manage your session well! Also with a max prize of 2,500x, the stake Hit it Big doesn’t offer the kind of potential I’d have liked to have seen.

All things considered, however, Hit it Big gets a thumbs up from us and is a worthy addition to Elk Studios ever-growing portfolio of online slots.