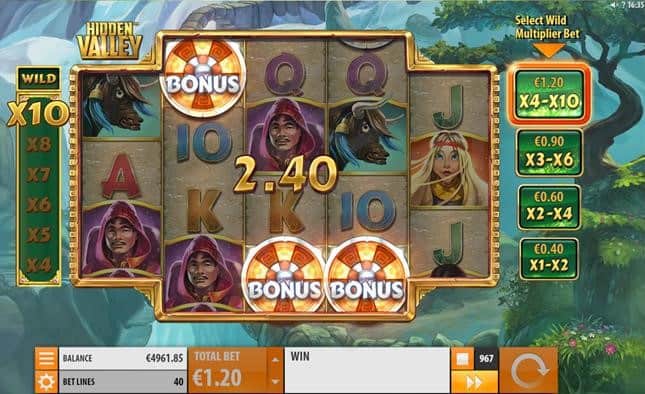 In keeping with the Shangri-La theme, the backdrop to Hidden Valley shows the snow-peaked Himalayan Mountain range the travelers must negotiate via an ancient stone pathway on their way up to a mysterious door in the mountainside. The hand-drawn details of both the landscape and of the characters in the game are impressive, and the accompanying soundtrack with its distant tribal drums, cymbals, wind-chimes, and harp strings is both soothing and atmospheric.

The gold-framed board has five reels, with the first and fifth reels containing three rows, and reels 2-4 each displaying four rows. The lower value symbols for Hidden Valley are the usual 10, J, Q, K, and A, while the higher value symbols, in order, take the form of a Buffalo, a Bird, a Sherpa, a female traveller, and a male traveller. Both the base game and the bonus game also benefit from stacked multiplier wilds which, depending on your wager, (and your luck) range from 1x to 10x and are represented by a simple green tile emblazoned with ‘Wild’ and the corresponding multiplier. There is also a scatter symbol, in this case, a disc resembling a casino chip with ‘BONUS’ across the centre.

Hidden Valley only has one bonus game, a free spin round, but stacked multiplier wilds which apply to both the base game and bonus game also represent one of the games special features.

Stacked multiplier wilds in both the base and bonus game can help the player to some seriously big wins. Interestingly the player can control the range of multiplier wilds they can play for. By choosing to stake the minimum per spin (€0.40) the only wilds available will be 1x and 2x. Up this to €0.60 and the wilds will be between 2x and 4x. A base €0.90 bet will see wilds chosen between 3x and 6x, while a €1.20 min bet will mean that any wilds falling will be between 4x and 10x. Once you’ve chosen your initial stake you can increase your bet accordingly up to a maximum of €90 per spin. 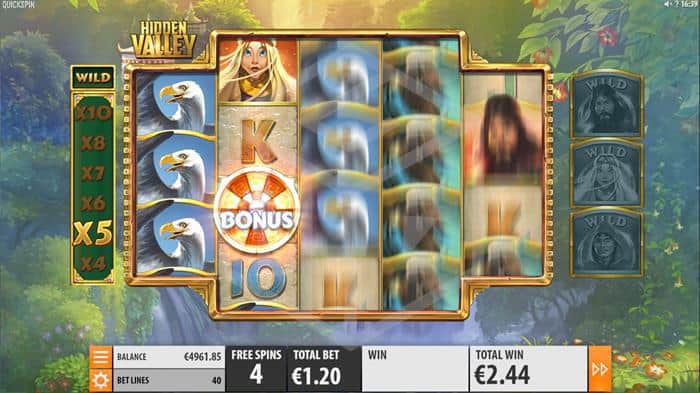 Hit three scatter symbols and you’re off to the free spins round. First off you get to spin a large wheel which shows the three human characters as well as three blank segments. If you land on one of the characters then whenever their symbol appears during the free spins they will act as an additional wild. Once this spin is completed the wheel spins again to determine the number of spins you get which will be between 7 and 12. If during the free spin round you hit two or more scatter symbols you will be asked to choose one. This may either reveal another of the three human characters which will then also become wild for the duration of the spins, or it may reveal an additional one or two free spins. If you manage to turn all three human symbols into wilds then you should be in for a seriously big winning round, especially if you also manage to secure some extra spins. 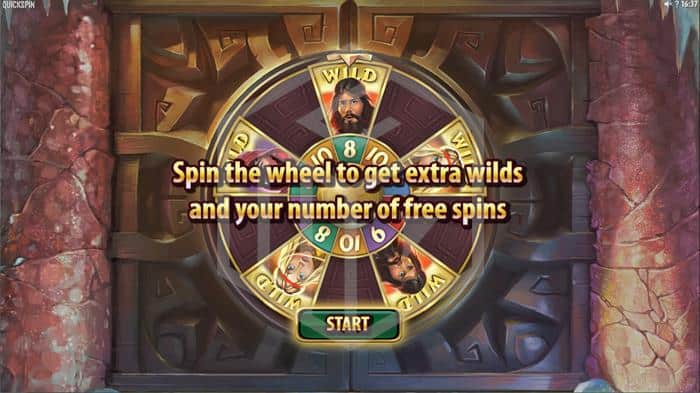 Our Thoughts on Hidden Valley

Hidden Valley is a really top-notch game from Quickspin. The graphics and design are superb and the game is really atmospheric with great attention to detail. Although a little short on bonus features the stacked symbols and wilds mean that wins are quite frequent and have the potential to be monsters if you marry up the stacked high-value symbols with the stacked high multiplier wilds. It’s also a nice touch to allow the player to trade-off a higher price per spin in order to reap potentially higher returns via higher multiplier wilds. The ability to reduce or increase the game’s volatility will appeal to both the conservative and high-risk players.