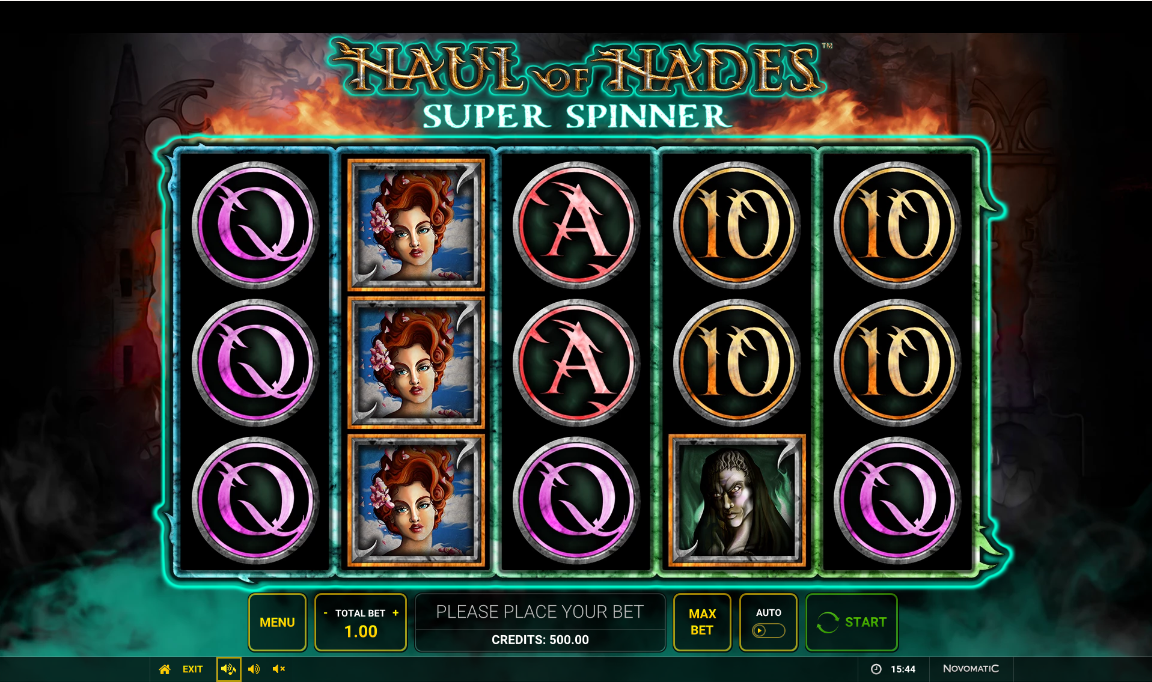 As the trend continues for slot providers to cash in on the success of a prior slot release here we have Novomatic subsidiary, Green Tube, adapting their 2015 horror slot, Haul of Hades, to become Haul of Hades Super Spinner.

Released on August 2019, Haul of Hades Super Spinner (HHSS) looks identical to its earlier incarnation, with the same symbols, the board size, design, reel mechanic, and music. However, it is very much its own game.

HHSS is ever-so-slightly more volatile than its predecessor although still very much at the low-medium variance end of the scale. This slot has a 5x3 reel set with 10 pay lines which reward 3 or more of a kind on adjacent reels. This means that winning combos can start anywhere on the pay line and not just from the far left reel. HHSS has an RTP of 95.05% and a maximum win of 2,500x the bet size.

The single feature is triggered by any win over 4x the bet size and involves playing 4 gameboards at once with a stacked wild in play. This is where any big wins are likely to be picked up.

You can play Haul of Hades Super Spinner from €0.10 to €50 a spin at participating casinos.

If you’ve ever played the original Haul of Hades then you may as well skip this part as the design, at least for the main game, is more or less identical. Perhaps that’s a slight exaggeration, there are minor differences. For instance, behind the gameboard, there are flames rising up in the distance. Also, the gameboard is framed in a neon turquoise rather than shades of green and brown. The gameboard, however, which consumes the majority of the screen, remains the same.

For the uninitiated, the scene is set at the crumbling ruins of the burning underworld, the ‘realm of the dead’. The gameboard contains a dark reel set which spins to the same epic, foreboding music as the original game.

Low-value symbols are the standard 10-A royals. The high-value symbols are represented by the Greek Gods; Aphrodite, Athena, Zeus and his brother Hades. Hades,  God of the Underworld, is the most valuable symbol with 5 across a pay line worth 250x the stake. There is also a wild symbol which only appears during the feature game

The game’s only special feature is the Super Spinner Bonus. You have the option to enter the bonus whenever a win of 4x or more lands during the base game. The gameboard is replaced with four smaller boards which you can spin at a cost of 4x your stake. One by one all four boards play out, the only difference from the base game being the inclusion of wild symbols. If fully stacked wild symbols lands on reel 3 of any board then it will automatically replicate on subsequent reel sets. You can leave the Super Spinner Bonus whenever you choose by hitting the collect button or you can play on for a maximum of 50 Super Spins

Haul of Hades Super Spinner looks good, just as the original did. It’s also very easy to follow and play. Often that can be a good thing with a slot as some folk just want to spin the reels and take their chances. That said, on this occasion, I wish there had been more to the game as I felt there was a distinct lack of substance to it.

Having only one feature isn’t necessarily a bad thing either, providing that feature is up to scratch. Unfortunately, I can’t really say that is the case here. Firstly, you have to actually pay 4x your original stake for every single spin you take in the feature round. I’ve no doubt that the RTP is higher during the Super Spins than it is during regular pay, but having to pay 4x my standard bet just to play really didn’t sit well with me.

Also, the fact that other than the addition of wilds the game is exactly the same is something of a let-down. No multipliers, no bonus games, just more of the same. I also found the stacked wilds part of the bonus a little disappointing. As previously explained, a stacked wild landing on any reel 3 of the bonus boards automatically appears on all subsequent reels – personally I feel that to make this bonus round more appealing the stacked wild should automatically appear on all 4 boards, not just on subsequent boards. Land the stacked wild on board 4 and that’s all you get!

Another gripe I have is that although the volatility has been raised, this still feels like a low variance game. Furthermore, its RTP of 95.05% is considerably lower than almost every new slot released. As such I don’t really see much point in choosing this slot over the (in my opinion) superior original game.

All in all, I found Haul of Hades Super Spinner to be something of a disappointment.