Guns n Roses gets off to a great start here, benefitting from an innovative design with some interesting quirks. The game board sits in front of an animation of a G’n’R gig with silhouetted concert-goers bopping to the band. While the symbols are perfectly well designed and theme-appropriate (of which more later), it’s the additional elements which make the design unique. First off you get to pick from a set list of five of the bands biggest hits to serve as the background music to accompany your game, a nice touch. Secondly, if you hit a bonus feature or make a big win the screen will cut to some live concert footage of the band from yesteryear with different clips for different features/wins – just another way Guns n Roses is able to create an authentic, immersive experience for the player. 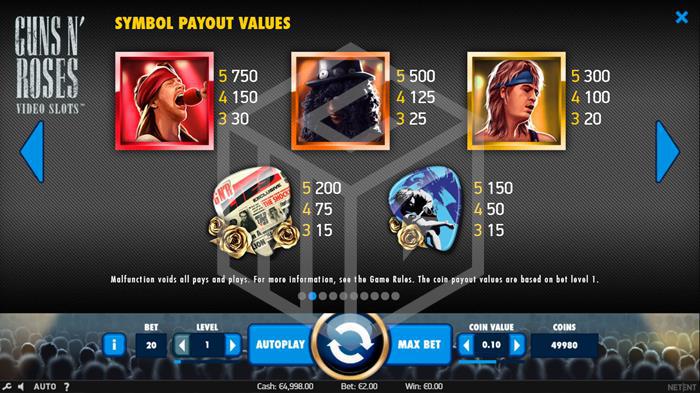 The low-value symbols are taken by the usual 10, J, Q, K, and A. The next two symbols are represented by plectrums, each featuring artwork from an album of the band, and the top three paying symbols are of band members Duff McKagan, Slash, and Axl Rose. Other symbols include the bonus symbol which takes the form of a vinyl album, and the wild, which is of the band logo and which on occasion will expand to fill all three reels.

Already spoilt with the design and soundtrack, Guns n Roses really pulls out all the stops here, offering a plethora of special features in both normal gameplay and in the lucrative bonus rounds.

This feature occurs randomly during the base game. The solo multiplier occurs during a winning spin and highlights one of the winning symbols, applying a multiplier of between 2 and 10 times to the entire win. Appetite for Destruction Wild Named after the band’s biggest album this huge wild replicates the cross of the album cover and appears during regular play and can result in some of the biggest wins you’ll see on the game. Legend Spins Another randomly activated base game feature, Legend Spins award three spins with a stacked wild on reel 3 on the first spin, stacked wilds on reels 1 and 5 on the second spin, and stacked wilds on reels 2 and 4 on the third spin. Bonus Wheel Hit bonus symbols on reels 1, 3, and 5 and the bonus wheel (a record on a turntable) will spin to reveal one of three different bonuses;  Coin Win If the bonus wheel is stopped at a coin win you will be rewarded with the number of coins displayed Crowd Pleaser A picking bonus where you choose from 8 musical instruments to reveal a coin amount. You get 3 picks per level, only moving up a level if you reach a certain total amount of coins each time. Get to the end and your winnings are doubled.   Encore Free Spins This bonus awards 10 free spins, during which a band member symbol will appear in each spin before expanding to create a three-row wild.

Our Thoughts on Guns n Roses

A firstrate slot. There aren’t many games where you get to pick your own soundtrack! And when it’s also ram-packed with features both in the base game and the bonus game, as well as being interspersed with actual live footage of the band, then there’s very little to complain about. Add to this the fact that with a 96.98% RTP Guns n Roses is well above average when it comes to return on investment then you can see why this NetEnt beauty is consistently ranked among their most popular slots.