Enter what looks like a hellish version of the wild wild west, with purple mist covering the background of your reels as you bounty hunt for the golden colts and the dead sheriff. The highest paying symbol of all is the wild and you can recognize it as the golden bull with the words wild beneath it. The wild substitutes for all symbols except for the scatter. The higher paying symbols are made up of what seems to be the dead sheriff followed by the deadly golden colts. The A-9 make up the lower paying symbols. The scatter symbol is a grey skull with glimmering blue eyes. The music of Golden Colts sounds much like a deadlier version of your typical wild west music, with trumpet and guitar sounds joining in on a win, or when things get a bit more exciting. During the bonus game, the music changes to a different kind of tune, more upbeat and better reflecting of the anticipation that comes with a bonus game where you do not really know the outcome. 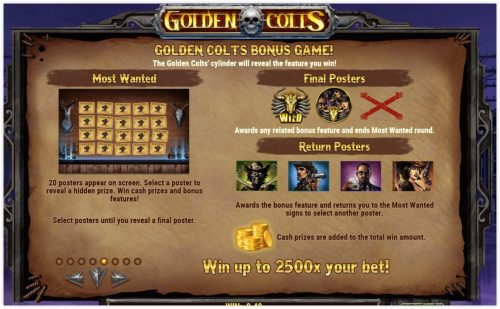 Six of these outcomes will definitely award you free spins, but in one of them, free spins are only a possibility.

The special features in Golden Colts consist of a bonus game with a possibility of seven outcomes. Whenever you get three scatters anywhere on your reel, these trigger the Golden Colts’ cylinder. The cylinder looks exactly like a gun cylinder that spins in order to award you one of the following seven outcomes: 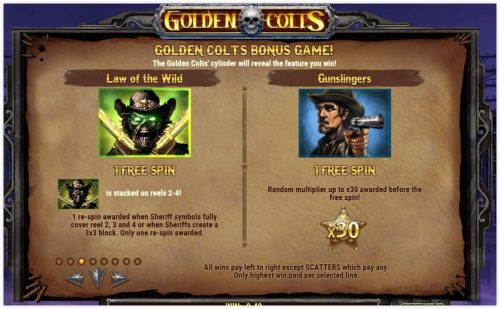 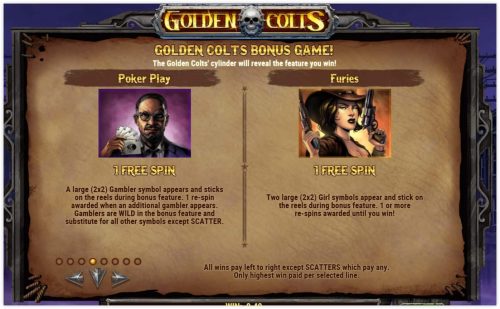 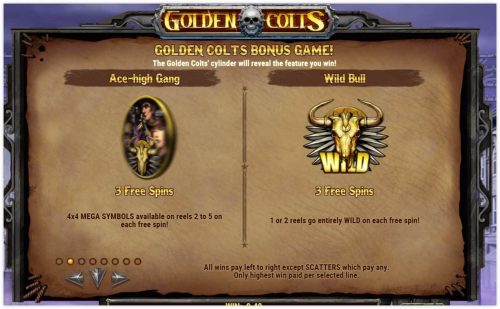 The first thing that we have to comment on is the fact that there’s the possibility to get awarded a total number of one free spin. How disappointing would that be? Having said that, we did like the fact that there are so many different options when it comes to special features, a total of seven to be exact. Maybe what would have made the game better was to have two options of free spins, instead of one at a go.