There are two different special features going on in Golden Beauty, one triggered by the wild symbols and the other triggered by the scatter symbols. However, it is the Progressive feature involving the wilds that is the stand-out feature of the game.

As well as being able to replace other symbols on the reels, the wild symbol of the game is the one to trigger the Progressive Feature in Golden Beauty. This feature offers pretty unusual gameplay, seeing as the rounds will take place in chunks of 10 spins at a time. Every time you land the golden lotus flower on the reels, the positions of the wild symbol will become parts of edges inside a golden frame.

After 10 spins, the wild symbol will then land on these golden framed edges and new winnings are made. After this, the gold-framed positions will be turned back to their original state and the whole process will be repeated yet again. 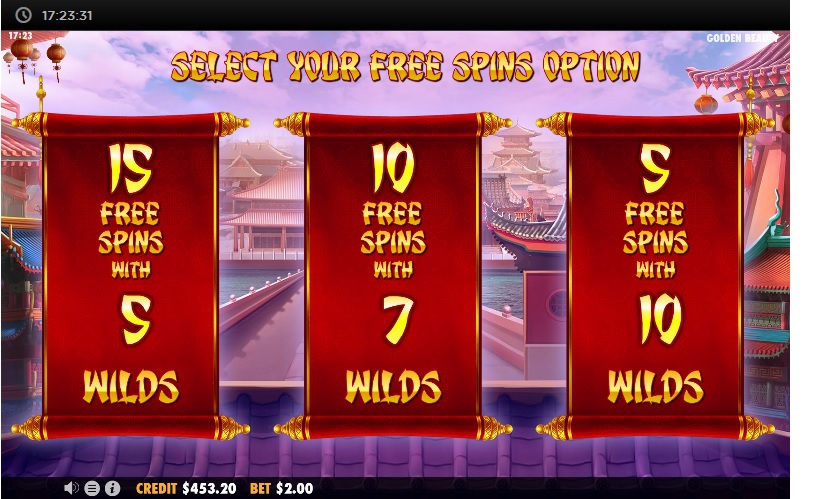 The second feature of the slot is, of course, the free spins round which will be triggered when 3 or more scatter symbols land on the reels, these can land anywhere. Once the feature has been triggered, you will be given the choice of three options. These options all include different combinations of wilds as well as free spins, the options made available will also depend on if you got 3, 4 or 5 scatters on the reels.

Once you have made your choice the free spins feature will start. During every free spin, the number of wilds you chose will be floating around on the screen until they land on random positions. In this feature, scatter symbols will also remain in play, meaning the whole feature could be re-triggered, should this happen, you will be able to make a different choice when given the three options. Making it even better, there is no limit to how many times the feature can be re-triggered. 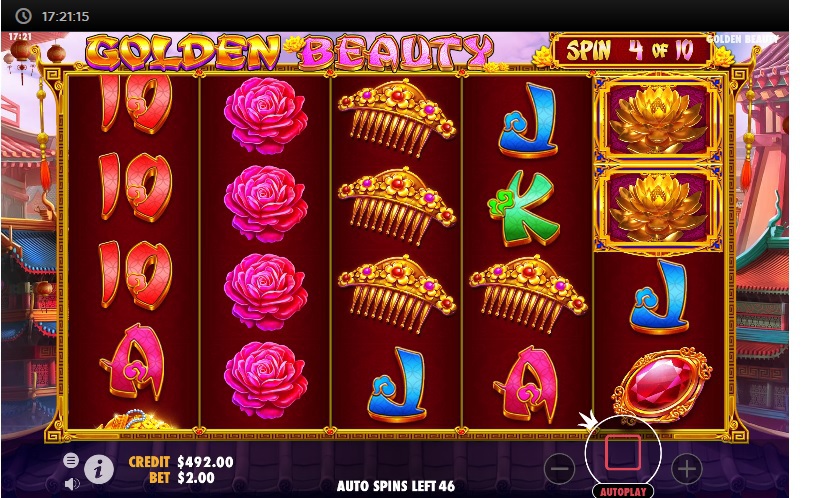 As mentioned already, Pragmatic Play has created Golden Beauty as an Asian-themed slot, which for some developers seem to be a clear favourite. In the background, you will see a beautiful and detailed background of what seems to be temples or old houses and buildings in a typical Asian style. The reel set has been framed by a golden border which also separates the reels from one another, along with some dainty details in each corner. The title of the slot is of course placed at the very top, also created in gold and pink.

Golden Beauty has a total of 12 different symbols, which includes 5 low value symbols. These 5 symbols are represented by the standard card suits with 10, J, Q, K and A this time created in a calligraphy style with bright colours. Five premium symbols are also in place, these being represented by different images fitting the theme. They include lutes, a golden comb, jewels, bookmarks, pots of gold and a woman. The woman is the most valuable symbol of the premium symbols, giving you 2.8x your total stake for 5 of a kind.

Our Thoughts on Golden Beauty

Golden Beauty certainly is a slot that looks good, Pragmatic has not failed when it comes to graphics or effects throughout the game. However, overall the game is unfortunately pretty simple and is as we mentioned previously a slightly over-used theme. There is so much more that could have been done to improve the gameplay and bring something new to the theme.

We are also disappointed by the maximum win which is at an incredibly low 210x your stake, this along with the fact that the slot is of high volatility doesn't make a great combination. The only thing which makes up for all this is the fact that there are two pretty entertaining features which seem to be triggered quite regularly from our experience.