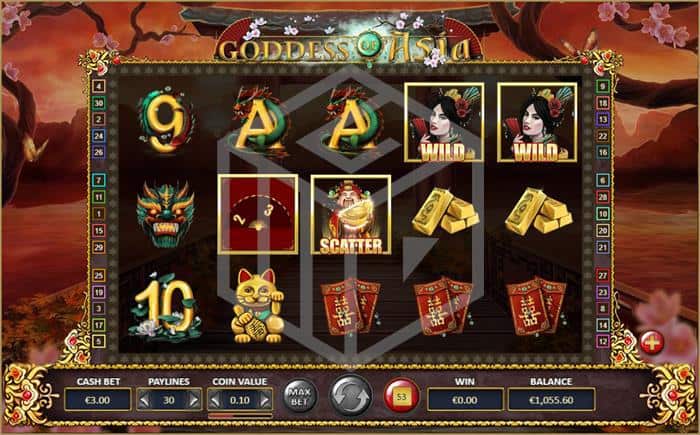 Oriental themed games are one of the most popular themes for developers to work on, with a staggering 898 Oriental/Asian themed games currently ranked by Slotcatalog.com, so if you’re a slot fan we’re going to take a wild guess that you know what kind of thing to expect from the general design of Goddess of Asia.

The good news is that on the whole, oriental themed games tend to be rather aesthetically pleasing, and Goddess of Asia is no exception; the background scenery has almost bare Japanese Cherry Blossom trees either side of the gilded game board, while the sun setting behind the mountains in the distance creates a gorgeous orange glow on both the mountains and reflected in the surrounding lake. The accompanying delicate oriental-inspired music is as hypnotic and calming as I would imagine the tantalising vista created would be in reality.

The low-value symbols are Asian-themed card royals 9 – A with the higher value symbols represented by Maneki-neko (the famous waving Japanese cat), snake engraved gold bars, a fire-breathing dragon mask, and red Chinese lucky money envelopes. The Goddess herself is the most valuable symbol, paying 6.66x bet size for 5 in a row and she also doubles as the wild symbol. The final symbols are a red fan which activates certain special features (more of which later), and the Gold Nugget Scatter which is a picture of an oriental emperor (or genie, we’re not sure which) cradling a golden lamp.

The appearance of a fan triggers a couple of neat bonus features in the base game and also plays a part wins in the other special feature, the free spins round. Also look out for the Goddess wild. 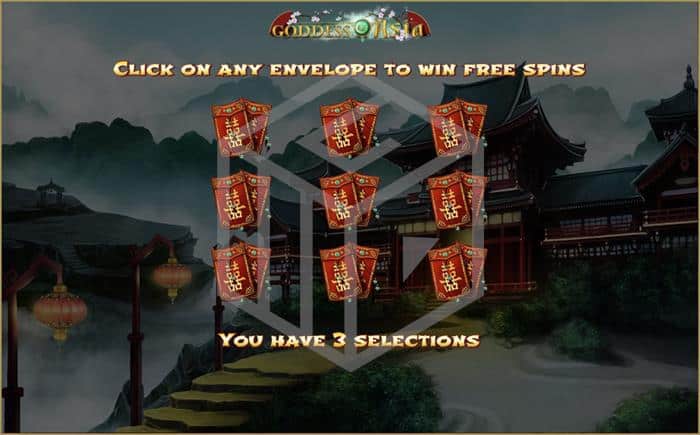 The Goddess Wild, when used as part of any win, will double the total win.

If the red fan lands on reels 2 or 3 in the base game, unique bonuses will be triggered 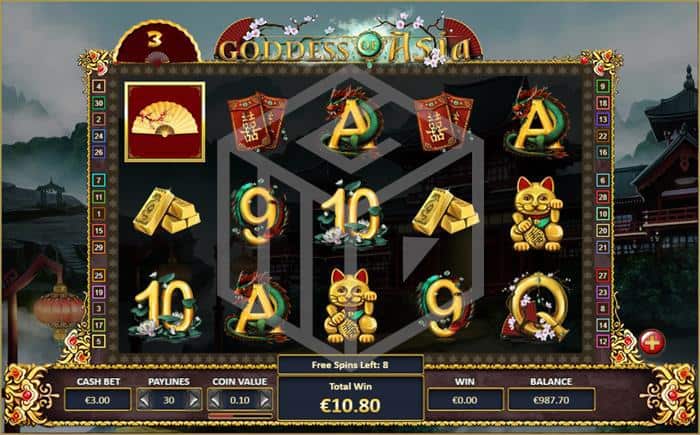 Our Thoughts on Goddess of Asia

Goddess of Asia is an entertaining slot with a very nice design and aesthetic, as well as a number of decent features. It probably wouldn’t be my first choice as a punter, but that’s more to do with the fact that I personally prefer a game with a little more volatility – but as a low variance slot, Goddess of Asia is right up there as far as I’m concerned. If you’re a high variance player who needs to play through a deposit bonus then I’d recommend playing Goddess of Asia, as despite the low variance it is still an entertaining slot with a free spin round which can pay out pretty big on occasion. One thing which might put you off a little, however, is the RTP at just over 95%, which is more than a full percentage point lower than the current average on offer.