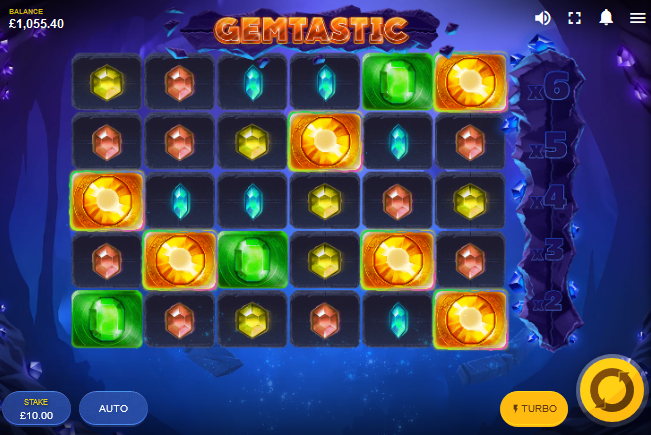 Red Tiger have done a superb job with the design here. The floating gameboard is situated deep inside a water-filled chasm where precious gems litter the rocky surfaces. Ethereal animations and background music create a wonderfully other-worldly feel to proceedings.

Colourful gemstones fill the gameboard. Aqua Marine, Blue, Purple, Orange, and Yellow make up the low value symbols with Purple, Red, Green, and Gold taking the top spots. The Golden gemstone is the highest paying regular symbol, rewarding 8x the stake for 6 on a payline. The highest paying of all, however, is the rainbow wild which pays 50x the stake for 6 of a kind. As Gemtastic has no distinct bonus round, there is no scatter symbol.

Features run throughout the base game including; collapsing reels with a ‘Lava Multiplier’, the ‘Magic Glow’ wild creator, and oversized ‘Mega  Gems’.

Winning combinations will disappear once counted and the reels will ‘collapse’ with the vacant spaces filled with symbols from above. The chain reaction win mechanic allows the ‘spin’ to continue every time a further winning combo lands.

Gems of 2x2 or 3x3 symbol spaces appear sporadically on the board, therefore enabling bigger wins.

A multi-colored glow will often appear around randomly chosen identical symbols on any given spin. If any symbol with a ‘Magic Glow’ forms part of a winning combination then rather than disappearing from the grid, they will transform into shooting wilds, each of which will land on an alternate random spot on the grid before the next collapse. If any of these wilds form part of a win then they will remain wild but shoot to another location before the next spin.

For a game with no bonus round and with a simple layout and set up, Gemtastic is an awesome slot. The design is enchanting, the smooth gameplay is hypnotic, and the potential for a big win is ever present.

One thing which took a bit of getting used to was the combination of the cascading reels with multipliers operating with 30 paylines. Quite often these features are used in combination with a ‘ways to win’ mechanic and as such it took a while to adjust – but this is almost an irrelevant quibble.

Having played for quite some time we experienced the highs and lows of Gemtastic. Red Tiger quite rightly issued this slot a ‘maximum volatility’ rating so naturally there were some bleak times.

However, the potential became apparent after a seductive run of chain reaction wins combined with a series of Magic Glow wilds. With the win multiplier rising to the maximum 15x we walked away with a win of over 1,000x in our very first session!

Beginners luck perhaps, but this is a highly immersive slot regardless of a random big win. Red Tiger Gaming are really coming into their own of late and Gemtastic can only help their growing reputation within the industry.