With an Irish-themed slot, there are never really any surprises with the design and artwork. The rolling fields, the winding lake, the leprechauns and shamrocks. Gaelic Gold has quite a simple design with the fields and hills bisected by the inevitable winding lake. Animated raindrops and shifting rain clouds are the only moving parts in the design, at the back of the scene, a rainbow rises high above the clouds. The large 3x3 gameboard has floating reels and has creeping clover and ivy winding around the golden frame. The gameplay is accompanied by a traditional “fiddle-de-dee” piece of Irish folk music.

Low value symbols are the standard royals J-A. Medium value symbols are a green top hat, a green buckled shoe, and a wooden tankard of frothy ale. High value symbols are a golden horseshow and a golden four-leafed clover. The clover is the most valuable regular symbol with 3 on a payline awarding 15x the bet size. The wild is the leprechaun who appears as a full reel symbol. The wild also pays 15x the bet size for 3 on a payline. There is no scatter symbol but there is a single bonus symbol of a pot of gold which only lands in the centre of the grid. 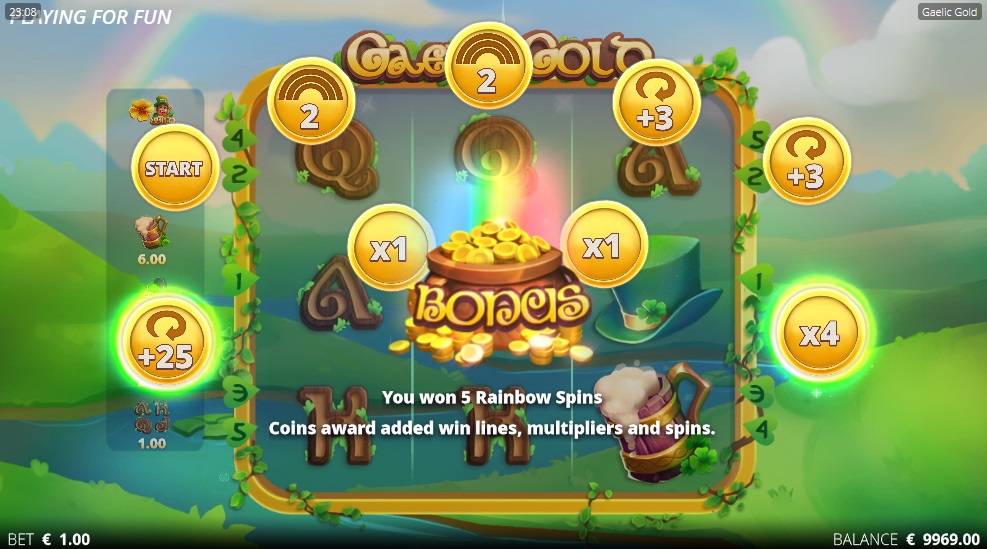 The Leprechaun Wild comes as a 1x3 full reel symbol but does not necessarily land fully in position. When part of the Wild lands on a reel it automatically nudges up or down until the reel is fully covered. For each nudge, it takes to reach full height a 1x wild multiplier is added to the wild’s value. If more than one wild multiplier lands on the same spin the resulting multiplier values are added together.

A single Gold Pot bonus symbol landing in the centre of the middle reel triggers the Rainbow Spins free spins round. A minimum number of 5 spins are guaranteed but before the round begins you are taken to a pick screen with 9 gold coins containing 8 additional bonus features and a ‘start’ coin. You continue picking until you reveal the start, after which the free spins commence. The bonus features up for grabs are as follows

Our Thoughts on Gaelic Gold

Although I’m not generally a fan of 3x3 slots, Gaelic Gold has a certain charm about it and its features play much like any 5x3 or 6x4 slot, which is rare. It’s not Nolimit City’s best slot, but it is far from their worst. With its medium volatility, playability, and simple to follow features, this is a game which any player can get a little something from, whatever level they play at. With a max win of close to 10,000x the bet size, there’s also a very decent amount of potential.

All in all, this is a nice addition to the mid-variance range of the Nolimit City portfolio, a provider who is growing in stature month by month.

Looking for more slots with bonuses you can buy? Check out the list to find a selection of slots including this feature, following all themes and designs.