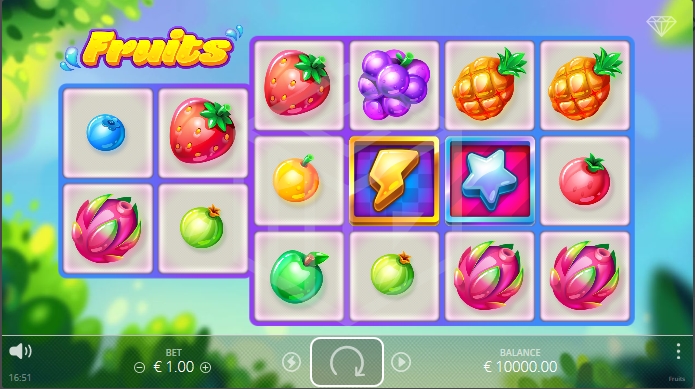 On mobile devices and tablets the game plays in either portrait or landscape, but only in landscape for desktops. Winning lines go from left to right in landscape and from top to bottom in portrait. Space around the board is taken up by blue, hazy skies and bright green leaves from surrounding trees and bushes. A gentle, hypnotic electronic melody plays in the background while the reels emit more traditional old school fruity beeps, bleeps and buzzes. The board has a purple/blue border which also separates each of the symbols. The reels on which the symbols sit are white.

The low value symbols are blueberries, greengages, oranges and tomatoes. Mid-value symbols are represented by apples, lemons, and pineapples. The highest value symbols take the form of strawberries, blackcurrants, and grapes. Grapes are the biggest paying regular symbols with 6 across a pay line worth 25x the stake.  The wild is a blue star on a purple background, and the scatter is a lightning bolt. There is also a ‘mystery’ symbol which takes the form of a question mark (more of this later).

Fruits benefits from two base game features, Sticky Fruit Spins and Mystery Wrappers, and a bonus game triggered by the scatter called the Lightning Round.

The configuration of the reels is such that the first 2 reels with only 2 symbols each create a 2x2 square ahead of the next 4 reels of 3 symbols each. If the first “square” fills up with the same fruit then Sticky Fruit Spins are triggered. The four identical symbols (plus any other examples of this fruit which have landed to make part of a win) will remain sticky while the reels spin again. Sticky Fruit Spins will continue until no further examples of that symbol land to create a new and bigger win.

During any random spin anywhere between 4 and 9 symbols might be overlaid with a ‘Mystery Wrapper’ (represented by a question mark). At the conclusion of the spin all Mystery Wrappers will burst and reveal an identical regular symbol. Mystery wrappers may trigger the Sticky Fruit Spins. 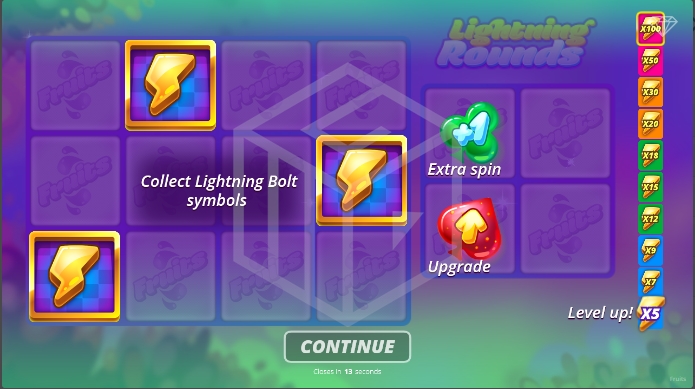 Land 3 or more lightning bolts and you will trigger Fruits main bonus feature, the Lightning Round.  The game board will split with the first 2 reels separating and moving to the right of the 4x3 section of the game board. 5 spins are awarded with the goal of filling as much of the 4x3 board with lightning bolts as possible. The 2x2 reel set also spins and the reels carry either blank symbols, upgrade symbols, or extra spin symbols.

Every time a lightning bolt lands you move one place up the win multiplier ladder to the right of the reels. If an upgrade symbol lands on the 2nd reel set then each place on the multiplier ladder increases in value. Extra spin symbols award an additional free spin. It is possible to win a multiplier of over 350x the bet size in the Lightning Round.

Our Thoughts on Fruits

Fruits is another solid offering from Nolimit City. It’s not exactly a mould-breaker, and it doesn’t really deliver enough potential to threaten the big players, but for a mid-variance spinner it has plenty to offer.  It’s a cheerful, colourful slot with a unique reel set up which offers plenty of ways to win. It will no doubt appeal to those who like a classic fruity and its simplicity should have no trouble attracting the recreational players. A solid, bright, and enjoyable slot to start the year for Nolimit City who have promised they have plenty more in store for us in 2019.