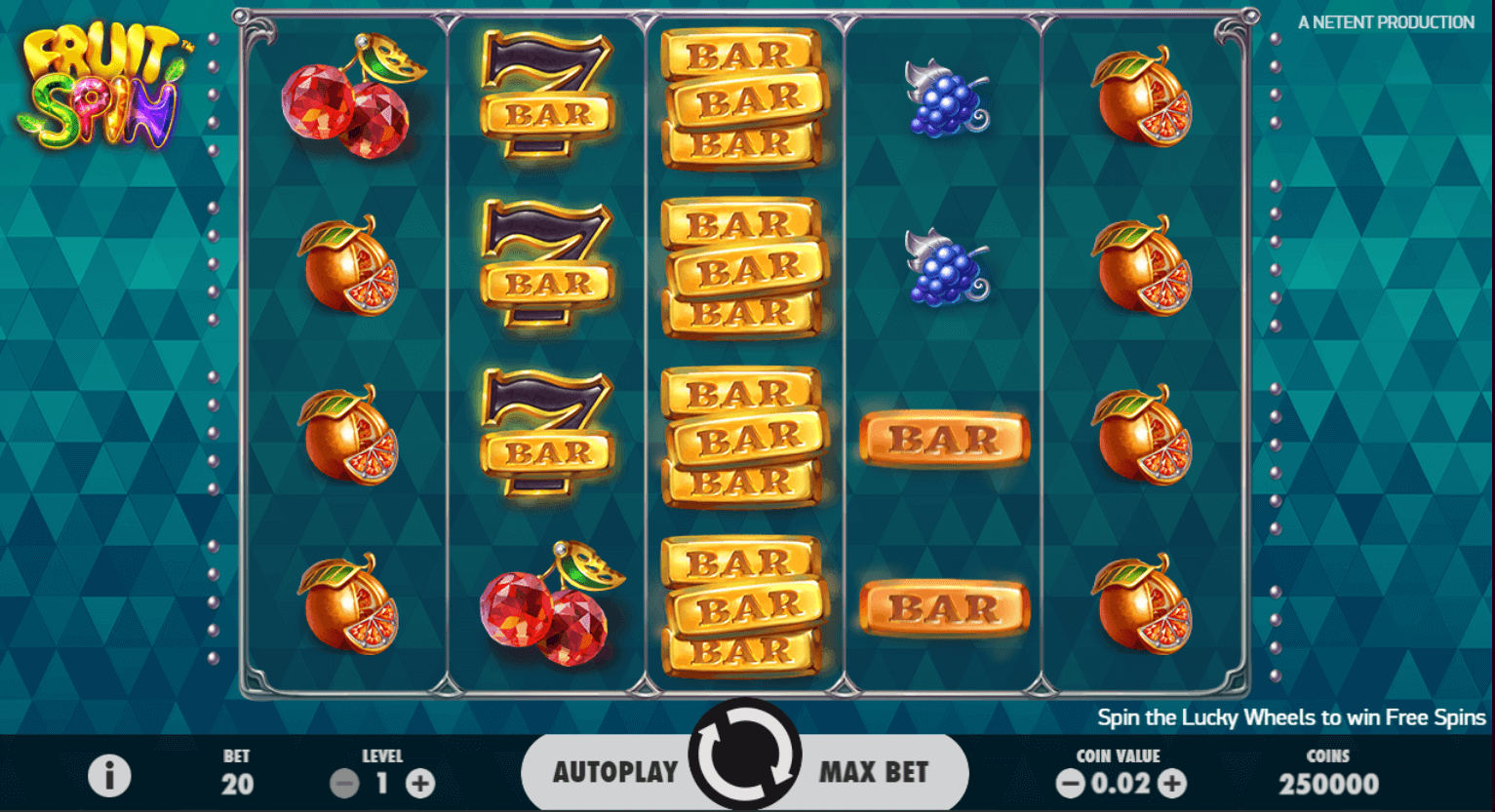 Judging by the slot’s name, one would think that the fruit would make up the higher value symbols, but that is not the case here. The theme is about fruit, but these make up the lower value symbols, more specifically the jewel-like blueberries, oranges, cherries, limes and raspberries. The high-value symbols feature four different Bar Symbols. The 7+ Bar symbol which is the highest paying symbol, awarding 15x the stake for five of them on a winning line. There is the gold bar, the silver bar and the bronze bar. The Scatter symbol is a big shiny ruby. Scatter symbols appear as maximum blocks of 3×3. The wild symbol is a green emerald which is only active during the bonus rounds. Wilds can substitute all other symbols except the scatter. All symbols appear stacked on the reels.

The special features in Fruit Spin are triggered often enough to keep things interesting. Although there are two parts, one leads to the other, so in reality, there is only one special feature, the free spins round.

To trigger this bonus, players have to land a 3×3 scatter block. Three independent wheels will then appear on the screen and start spinning. These wheels can award cash prizes or take the player to the bonus round. The number of wheel spins the player gets depends on the number of rows of the scatter block that activated the bonus. Cash prizes are pretty good, as they can give up to 4x the stake from just one wheel. However, the best result is landing three rubies and entering the bonus spins feature. The ruby symbols get collected on top of the screen, so having multiple wheel spins will give a better chance of triggering the free spins.

As a player, you can trigger the bonus by landing three ruby symbols during the Lucky Wheel bonus. The player will get five initial spins for three rubies, however for each extra ruby that lands during the wheel spin you will be awarded an extra spin. During the free spins, the player can land more scatter blocks that re-trigger the Lucky Wheel bonus. During the bonus rounds, the player can win additional spins or cash prizes.

NetEnt has taken an insanely popular fruit theme and simplified it into a modern classic. Maybe there could have been an easier way to get to the free spins round, but it is a decent game with easily triggered special features nonetheless. What we did not like so much here was that we found it quite hard to get a 3x3 scatter block, but we are hoping you’ll be a bit more lucky than us. One thing that we liked about Fruit Spin, is the fancy looking symbols, no matter if they are low paying or high paying; they just give an overall fancy feel to the experience.