As this is another slot in the Foxin series, you will, of course, get to meet the famous Mr Foxin once again. This time, however, it's not him who is in the spotlight, but his many fox pups. They can be seen above the reels and will help you out throughout the game by giving both wilds and wild multipliers. Visually, Foxin Twins has gotten a cartoon style with a wealthy estate set as the background behind the reel set, which gives the game a luxurious feel to it. The two-reel sets have gotten each their colour, one green and one blue. The same symbols can appear on both reel sets.

The symbols of lower value are the classic royal suits, ranging from 9 to A simply designed in different colours. Symbols of higher value include luxurious items such as private jets, champagne flutes, gates and a horse riding fox. A wild symbol is also found in this slot, this being a pipe-smoking fox. For five of this symbol on a payline, you will get 20x your stake, also the wild will, of course, have its usual power of substituting other symbols on the reels.

Features play an extremely big role in this slot, and by adding a little extra to your wager, you will make them more likely to trigger. There are both scatters, plenty of free spins, wild symbols and up to x20 multipliers available.

You should decide whether or not to activate the SuperBet feature beforehand. This feature consists of two different levels, which will cost you extra to use, but at the same time, it will give you better features as well as benefits. In this feature, the Foxin Pups also can affect the outcome of your winnings as they are ready to turn random symbols into wild symbols. The higher your SuperBet level is, the more Fox Pups you will benefit from. 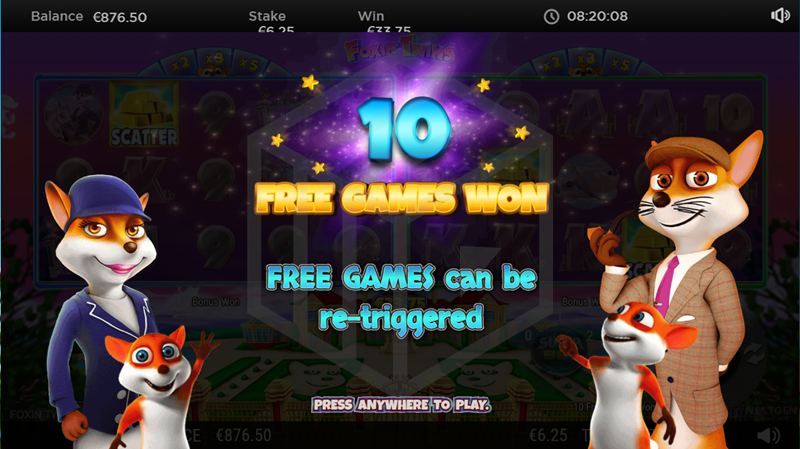 This feature will be activated when 3 to 0 golden scatter symbols appear on one or both of the reel sets at once. You will then be rewarded with between 10 and 100 free spins. During this free spins feature, you can also benefit from a couple of random bonus features.

The two random bonus features are as following:

Actually, you can benefit from both of these bonus features. It will also be possible to re-activate the free spins feature, and you will be able to get up to 200 spins in total. The multiplier size will be determined by your SuperBet level and can go as high as x20 during the free spins feature.

Our Thoughts on Foxin Twins

Foxin Twins is a fun choice for those players who prefer slots with higher bets. If you can afford to activate level 2 of Super Bet, it is a great game. Not so much if you do not plan on enabling this feature as the RTP will get pretty low.