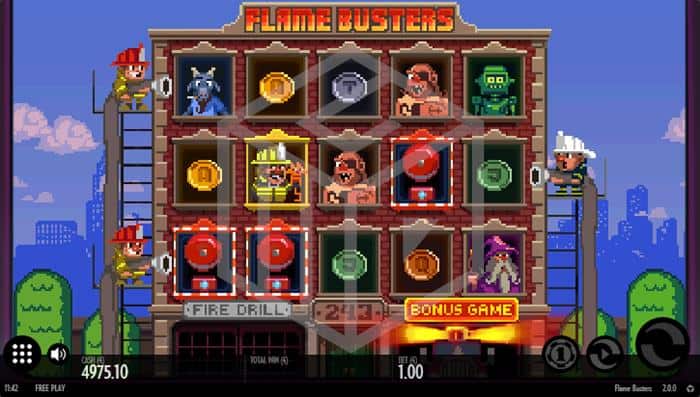 For an old-timer like me, the retro graphics in Flame Busters give the game an exquisite charm, taking me back to my misspent youth where I’d spend my school lunch money on Super Mario Bros. and Mr. Do at the local amusement arcades. No doubt there will be some detractors, more used to the slick graphics and animations they’ve come to expect with a brand new slot, but you can’t please everyone can you?

The game takes place inside an apartment block with characters at the windows taking the place of symbols on the reels. Either side of the building are fire-fighters on ladders wielding large hose pipes to douse any flames which arise. The background shows a distant silhouette of a city skyline with some Nintendo-Esque blocky green trees next to the apartment building.

The low-value symbols take the shape of different colored coins emblazoned with the royals T, J, Q, K, and A. Higher value symbols include a smoking goat, a green robot, a bald pirate with an eye patch, beard, and hook-arm, a wizard, a fire-fighter holding a cat. The fire-fighter is the highest paying symbol, awarding 10x the bet size for 5 in a row. The wild is a big golden W, the scatter is a round red fire alarm, and there is also a mystery symbol which is represented by a burning fire. All fire symbols are replaced by another symbol type at the end of the spin (except for wild and scatter).

The fire symbols occur in both the base game and the bonus game, the ‘fire drill’ feature only occurs in the base game, and the free spin round is the big winner as far as this game is concerned.

As already described, the fire symbol is the mystery symbol that will transform into a regular paying symbol at the end of a spin after they have been successfully put out by the firemen.  What makes the mystery symbol more interesting, however, is that they usually appear en masse before all transforming into an identical regular symbol which can create some decent wins (it can also result in zero wins, however). 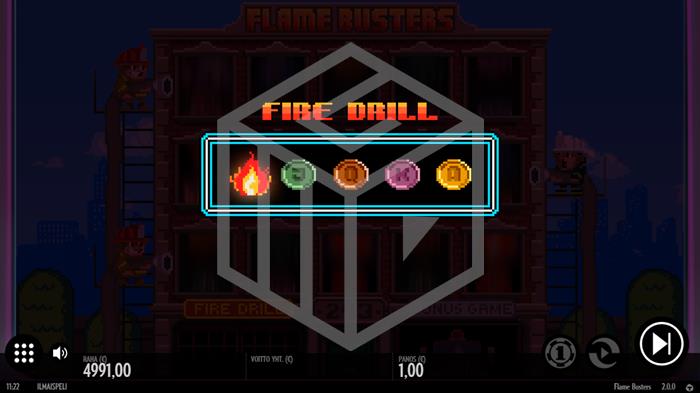 Only occurring in the base game, this feature occurs randomly and when it does you will see a rectangular box appear showing the five low-value icons. During the Fire Drill, any number of these symbols will turn into fire symbols and all examples of those symbols on the game board will transform into an identical higher value symbol.

Land 3, 4, or 5 fire alarm bells and you’ll be awarded 10, 15 or 20 free spins respectively. During the bonus round, you will be looking to land more fire bells as for every three landed you’ll move up onto a higher floor and will be rewarded with an additional 2 free spins. There are five floors in total meaning a potential additional free spins. Furthermore, with every new floor reached the Coin Ignition feature will be triggered whereby the lowest value remaining symbol with becoming a fire symbol, and all examples of that symbol on the board will change into a higher value symbol. Reach the top level and there will only be high-value symbols left which will lead to more and bigger wins. 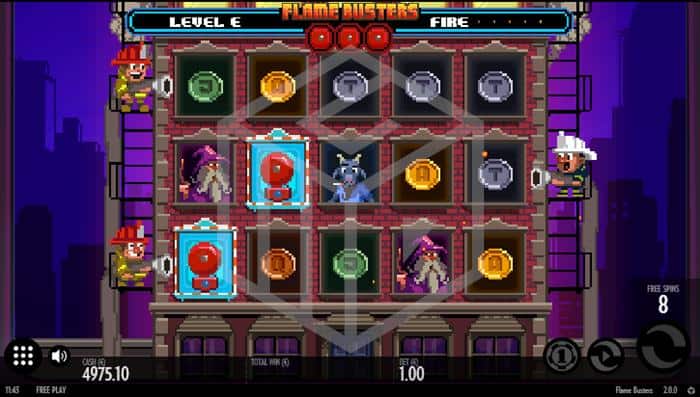 Our Thoughts on Flame Busters

I thoroughly enjoyed my time playing Flame Busters. I can’t deny that being transported back in time to my early gaming days may have added a pair of rose-tinted spectacles to proceedings, but the game had enough about it besides the retro graphics to keep me entertained. From my experience, I would say that Flame Busters lies on the higher end of medium volatility which should appeal to big win seekers, and with a maximum win of 5,280x your stake big wins are certainly possible. The free spins tend to reward well, and if you manage to climb the building then those wins can really boost your bankroll. Conversely (of course) be prepared for dry spells before you hit the fire, and adjust your bankroll accordingly.