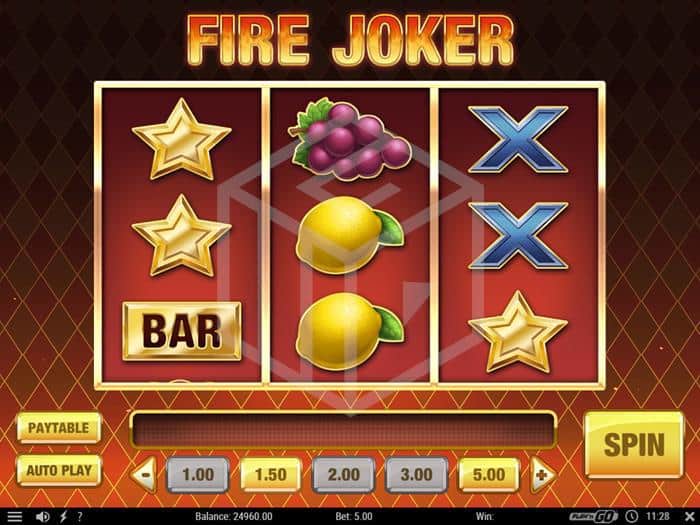 Once again, a fairly standard no-nonsense design. The game board sits on top of an orange and red hued diamond pattern with FIRE JOKER written is burning letters above the board and the win-o-meter beneath it.  If you land a win then both the symbols which make up that win and the border of the game board start to catch fire temporarily.

The symbols themselves sit on a red background, appear stacked, and are mainly old school fruity symbols. In order of value they are; Blue crosses, cherries, lemons, grapes, plums, bars, stars, and red sevens. Three red sevens on a pay line awards 5 times your stake. The flaming joker is the wild and also the highest paying symbol. If you land 3 of him on a pay line you win 16x the bet size.

As with most 3x3 slots, there is no free spin round in Fire Joker. However, there are a couple of features which often lead to some nice wins, namely the Respin of Fire and the Wheel of Multipliers. 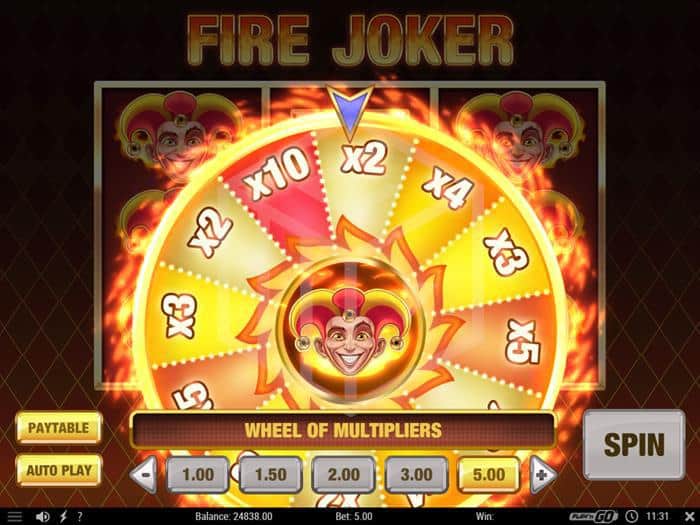 If you cover any two of the three reels with matching symbols then the third reel will respin, giving you another chance to make winning combinations. If two symbols manage to cover two reels (only possible with a wild reel) then the highest paying symbols will remain in place for the respin.

If you cover the entire 3x3 board with the same symbol (can include wilds) then you are taken to the Wheel of Multipliers, a flaming wheel of fortune with the joker at the centre where you get the chance to multiply your win by up to 10 times. This means a potential win of 800x your bet, the maximum attainable from one spin on Fire Joker. 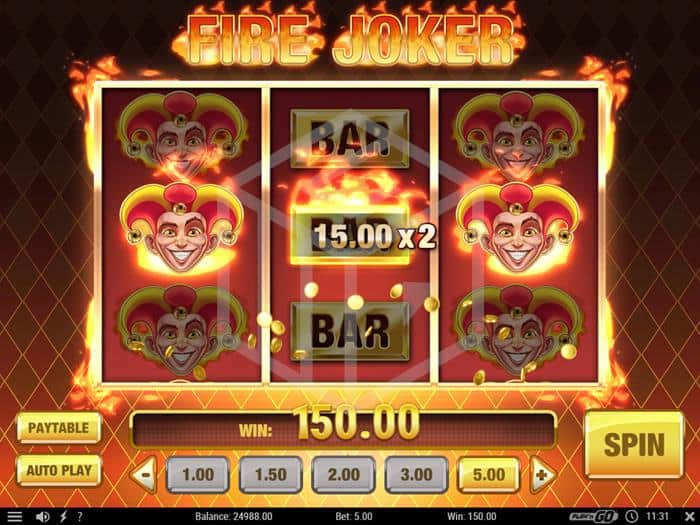 Our Thoughts on Fire Joker

With a 3x3 slot, you can usually have half an idea of the format (very few win lines, standard symbols, no free spins, lots of dead spins), but there is a place for the old school 3x3’s and they have a loyal following.  I’m not usually a fan of 3x3 slots, to be honest but I have to admit Fire Joker is a neat little game. There’s no hugely ambitious design element but it looks sharp, especially on a mobile device (which I think it’s safe to assume this game is predominantly aimed at), the action is smooth, and the features may be simple but they break up the dead spins nicely and really add to the game. I found myself strangely addicted to this game and ended up playing the test version for far longer than intended – and that is not something I would ever usually do with a 3x3 slot, so it must be doing something right!