Extra Juicy, released in March 2019 from Pragmatic Play is a simple slot with a simple old school fruity design. However, with a possible win of €3m up for grabs, the lack of features is offset by its massive potential.

Extra Juicy operates on a 5x3 reel set with just 10 fixed paylines and has an RTP 96.52%. All the potential in this game comes from its one feature; a free spins round with ever increasing win multipliers. 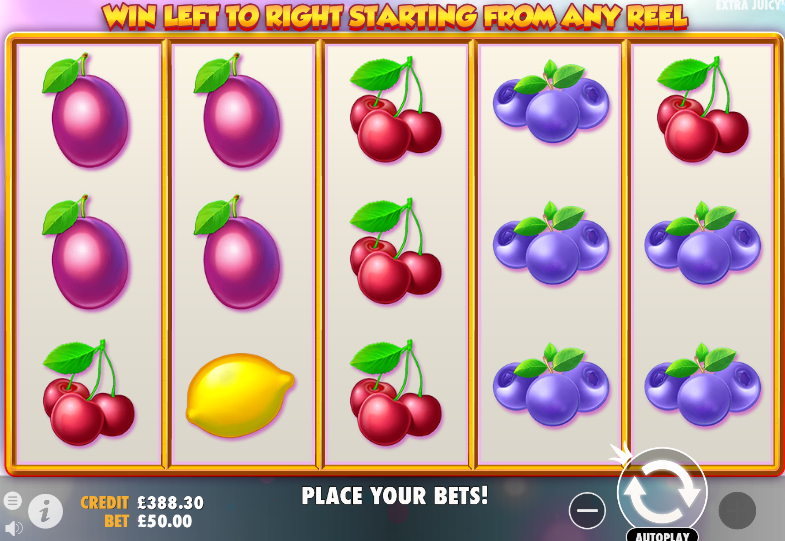 The design for this game couldn’t really be simpler. Almost the entire game space is taken by the reel set with the fruit symbols spinning on stark white reels.

There is a tiny amount of space below and above the reels which is filled with a hazy purple background occasionally lit with animated floating disco lights. An upbeat disco track accompanies play.

Bells are the top paying symbol with 5 on a payline worth 100x the stake. The scatter symbol is a blue diamond which appears on reels 1, 3, and 5 only.

One slightly unusual part of the reel mechanic is that identical symbols on any 3 adjacent reels will pay out –  therefore winning combos do not need to start on reel 1 or reel 5.

With no base game enhancers or features Extra Juicy relies on its sole feature, the ‘Progressive Multiplier Free Spins’ for the ‘juicy’ wins.

3 scatter symbols award 12 free spins with progressive multipliers. Unusually the win multiplier increases on every spin, regardless of whether a win lands or not.

Free spins are re triggered by landing a further 3 diamonds and up to 4 re triggers means that a potential 60x win multiplier is possible. Land a full board of bells whilst playing at the maximum stake of €50 per spin with this 60x multiplier and you will walk away with a huge €3m win. 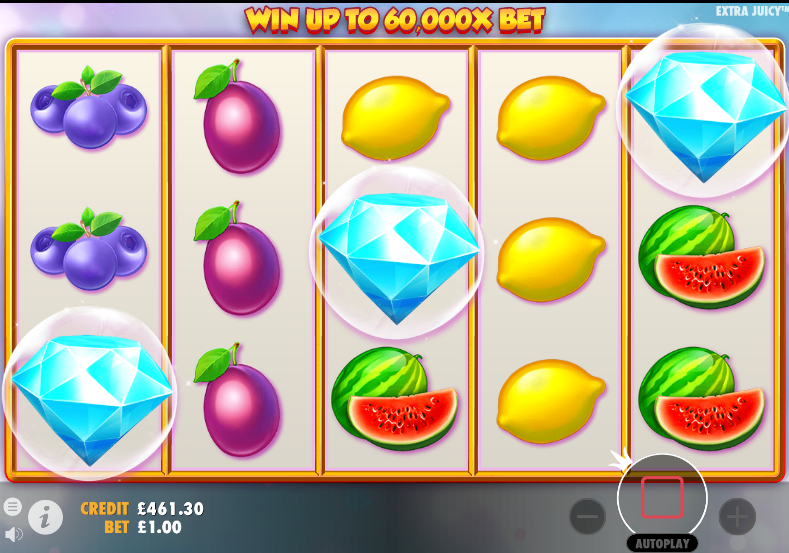 Our Thoughts on Extra Juicy

Well, there’s not an awful lot to think about here. It’s about as simple as it gets in terms of reel mechanics and game play. The design is also fairly rudimentary but the symbols are big and juicy, and so are the potential wins – and that’s this game is all about.

When you’ve got a slot which has is capable of delivering instant multi-millionaire status then who needs features, animations, or gimmicks?

As you would expect with a game with such huge potential it is incredibly volatile so, as always, be careful with your bankroll. While the free spin round quite often pays back in spades, it can also be a crushing disappointment.

Hundreds of spins can whizz by in the blink of an eye while you’re searching for that life changing win. Nevertheless this is sure to be a big hit with those with an eye for a highly volatile slot promising big returns

Tip: Have you given our Online Casinos Index a tour yet? If you fancy slots from Pragmatic Play, use the filtering option under "game providers", and we'll list all the Pragmatic Play Casinos we have.