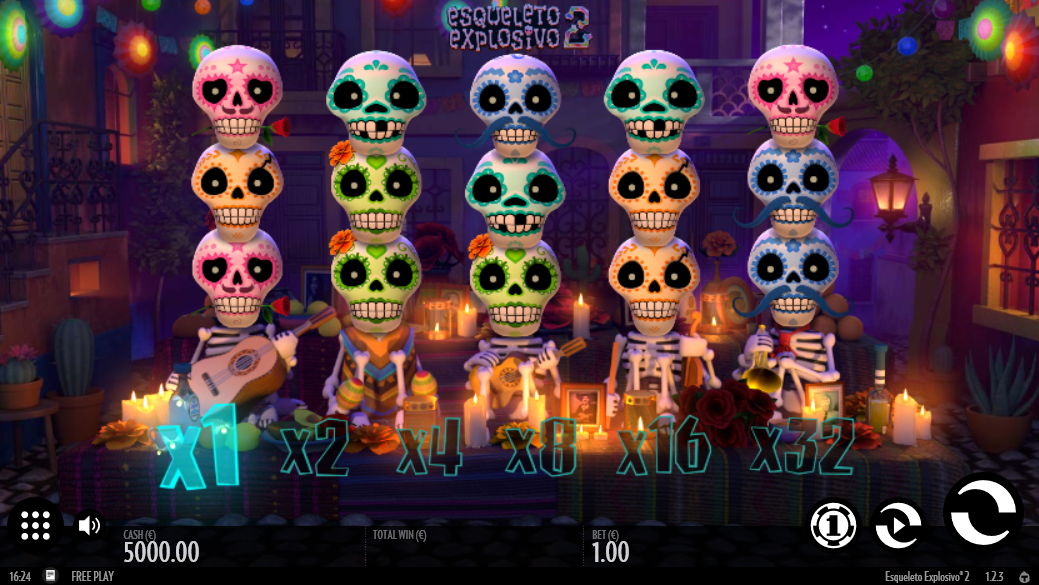 If you’re familiar with the first instalment then you can skip this section as mimics the original identically but for an additional symbol or two. The base game action takes place in a courtyard, surrounded on all sides by houses with an arch in one corner leading out into the street. The houses all have brightly coloured umbrella light decorations and the cobbled courtyard floor is has potted plants and cacti littered around its edges. The floating skull reels sit in front of a long table covered in candles, pictures of relatives and other offerings. The night sky is visible above the arch, as are a multitude of fireworks. The noise of fireworks, cheering, singing, and traditional, upbeat Mexican fiesta music all add to the celebratory atmosphere. In fact, I’d go so far as to say that music is one of the highlights of the game.

Below the skulls on the bottom row are 5 skeletons who form a mariachi band. Whichever skull symbols are on the bottom row make up the heads of the bandmembers. There is also an explosive (Explosivo) wild who wears sunglasses, sports a big grin, and glows yellow. The scatter is a mechanical wind-up skull.

The game plays similarly to a raft of other games which all take their inspiration from NetEnt’s classic Gonzo’s Quest. Skulls explode after forming part of a winning combo and are replaced by skulls dropping from above. Below each reel is a different, increasing win multiplier which form the ‘Mucho Multiplier’. Each consecutive win moves you one place up the Mucho Multiplier. The appearance of an Explosivo Wild also moves the multiplier along one place. In the base game the multiplier starts at 1x moving to 2x, 4x, 8x, 16x, and 32x. A non-winning drop resets the Mucho Multiplier.

Explosivo Wilds substitutes for all regular symbols bar the scatter. They also (strangely enough) explode and take with them between 3-8 regular symbols (apart from scatters of the high value purple lady skull). The number of skulls exploding depends on where the wild lands. Basically, it takes out all regular symbols surrounding it. New skulls then drop down to fill the gaps. 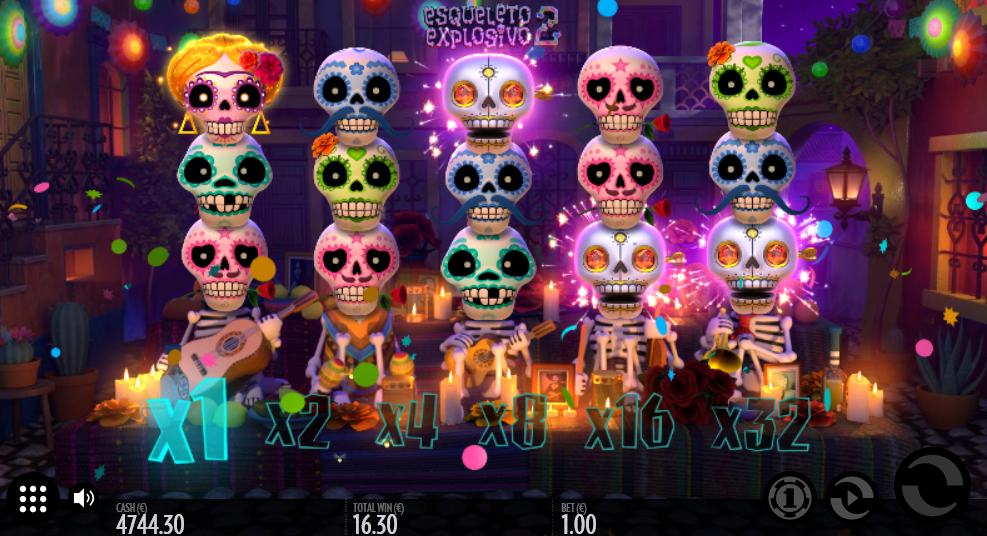 Our Thoughts on Esqueleto Explosivo 2

Thunderkick very rarely fails to deliver the goods, and Esqueleto Explosivo 2 is no exception. Fans of the original will love it, as I’d imagine will a whole new generation of players. Upping the volatility considerably was a very good change to make given the current demand for high variance slots. Another good decision was to add a free spins round; with some decent potential under its hood, Esqueleto Explosivo 2 now really packs a punch.

We’ve seen plenty of games with the cascading symbols and increasing win multipliers in the Gonzo’s Quest mould, but few are as entertaining as EE2. From the tweaks made to the Explosivo Wild to the joyous bursts of mariachi music and acapella singing, this is yet another fantastic release from Thunderkick.