Elemental Beasts by Inspired Gaming released on 25.09.2019 is a 5-reel & 3-row online slot with 20 paylines and a 96% RTP. This is a fantasy-themed game offering players a max win of up to 10000x their stake. Elemental Beasts can be played on all devices from €0.1 to €30 per spin and is considered a medium volatility game. 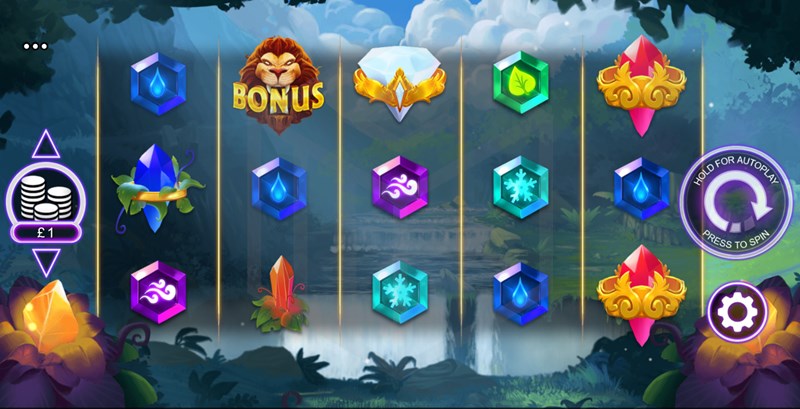 True to the game’s title, the design focuses very much on nature’s elements. The action takes place in a majestic and tranquil setting; snow-peaked mountains to the left, lush green grass and trees to the right, and a blanket of water cascading gently down the hillside before creating a huge waterfall crashing down into the abyss below. The hillside and forest are steeped in the mist rising up to fluffy clouds which eventually give way to blue skies high above. In front of the reels lie animated tropical plants, some of which glow with a mystical aura. The full-screen landscape is visible at all times, situated behind the floating symbols with the reels only separated by thin, vertical pulses of golden light. The soundtrack is suitably ethereal with the occasional tribal drum beat, strings and panpipes with birds chirruping in the background.

Low-value symbols are coloured glass hexagons containing leaves, a gust of wind, lightning, a raindrop, fire, and a snowflake. All low-value symbols pay equally with 5x the bet size awarded for 5 on a pay line. High paying symbols are coloured crystals and gemstones. In ascending order of value they are purple, orange, blue, red, and diamond. Five diamonds on a pay line awards 25x the bet size. The wild symbol is an icy wolf’s head and the scatter symbol is roaring lion’s head. 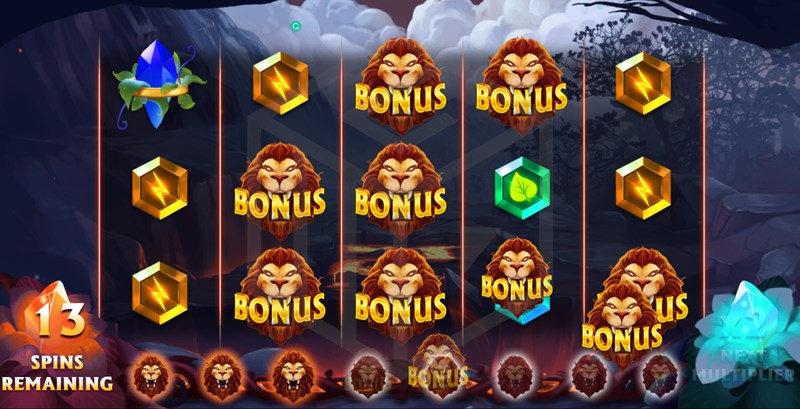 Free spins start in ‘Fire Mode’ and the aim is to collect 8 lion head scatters in as few spins as possible to progress to ‘Ice Mode’. Land 6 or more scatters in one spin and you’ll retrigger the correlating number of free spins. Retriggering is far easier than the initial activation as there are far more lions on the reels. There are also no limits on the possible number of retriggers.

Ice Mode is where the money is made as the lion heads are replaced with ice wolf wilds, starting with a 2x win multiplier. This time you have to work your way back along the meter at the bottom of the screen by landing 8 wilds in total. Once you’ve made it back to Fire Mode the process is repeated and you’re on your way back along the meter to Ice Mode. With each new level of Ice Mode, another 2x win multiplier is added to all wins.

Extra Bonus Chance randomly activates during the base game. This feature delivers a spin which is significantly more likely to trigger free spins than a regular spin.

Spinsurance is one of two nice little extras from Inspired Gaming. Run out of free spins and your winnings are less than 10x your bet size you are automatically 3 additional spins. Spinsurance continues until your winnings have crossed the 10x threshold.

Spin Chance activates if your cash balance falls below the cost of spin during the gamble feature. Spin Chance gives you the opportunity to wager the cash you have left in your account until you have enough for another spin at the current bet size. You may remember this feature from May’s Book of the Irish?

Our Thoughts on Elemental Beasts 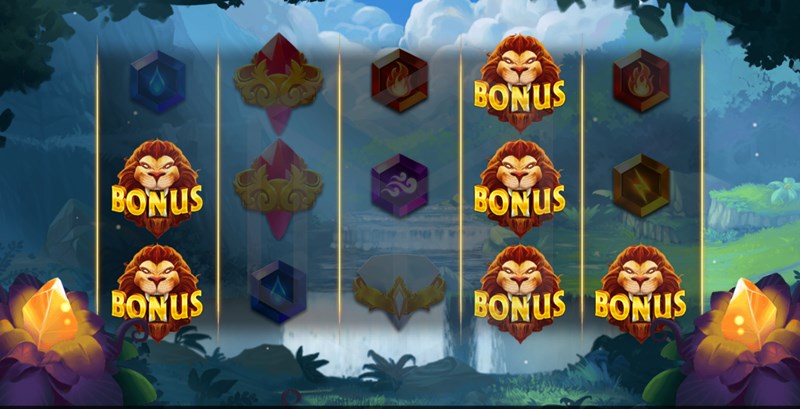 Elemental Beasts is a surprisingly engrossing game from Inspired. The dual-mode free spins make the bonus round doubly entertaining, and the chance of retriggering spins every time you reach Fire Mode makes it a truly exciting feature. Having said that it can be pretty damn hard to trigger and if retriggers don’t fall your way you could end up very frustrated indeed. Also, the fact is that the base game is merely a means to an end, and that end is free spins. Big wins in the base game are as rare as a good hair day for Donald Trump.

All that being said I couldn’t help but like Elemental Beasts. The design and soundtrack are atmospheric and aesthetically pleasing, the potential is decent, and the little extras such as Spinsurance and Spin Chance mean you’ve always got a shot to get back in the game. Overall I would certainly recommend you give it a try, but be careful how you go with those volatile beasts!