Eastern Emeralds design and symbols seem fairly standard for an Asian-themed slot, with the lowest value symbols occupied by 10, J, Q, K, A and the higher value symbols represented by numerous oriental golden artefacts (coins, ingots, turtles, koi carp, and a dragon mask). The highest paying symbol, the mask, gives a return of 7.5x for five across a pay line.

The wild symbol takes the form of a large emerald. There is only one wild per reel but they are ever increasing multiplier wilds with the first reel being a standard wild, the second reel is a 2x wild, then the third is a 3x wild, followed by a 4x wild and final a 5x wild. The final symbol is the scatter which is represented by a red phoenix rising from the flames with ‘bonus’ written across it. All the action takes place within a gold-framed board set in the aforementioned oriental wilderness while tranquil far-eastern music plays in the background. 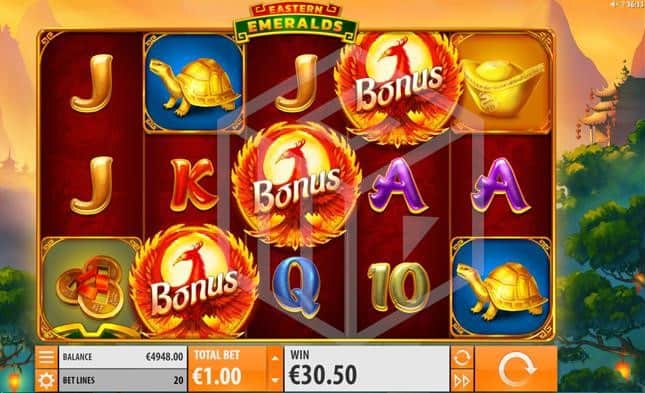 Other than the multiplier wilds in the base game, the only special feature in Eastern Emeralds is the free spin round, ‘Choose Your Destiny’ 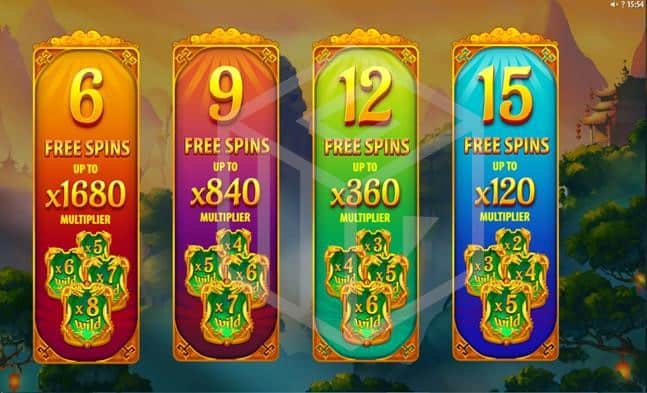 Our thoughts on Eastern Emeralds

Despite Eastern Emeralds being a relatively straightforward game with few surprises, the ascending multiplier reels mean that even during regular gameplay big wins are very possible. We also like that if you are a more conservative player you have the option to reduce the volatility during the bonus round by taking more spins with a lower multiplier, and likewise, the true gamblers can opt for the excitement of a high-risk, huge return free spin round. Although this is not Quickspin’s first Asian-themed game (Sakura Fortune, Hidden Valley), it is definitely the one with the biggest potential for a monster win and therefore certainly worthy of investigation.