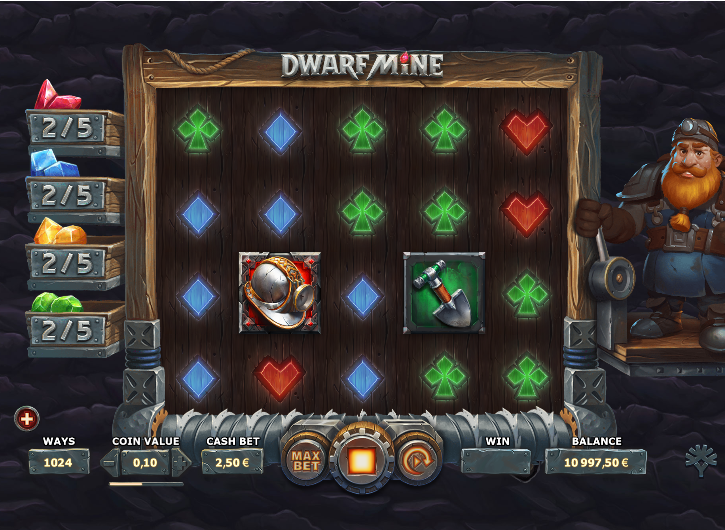 Yggdrasil is probably the most consistent provider when it comes to on-point visuals. Set in a deep underground diamond mine the timber-framed gameboard is designed to resemble and work like a hydraulic drilling machine.

It is operated by a level wielding ginger-bearded miner standing on a platform to the right of the board — boxes to the left of the gameboard store Gems unearthed during the excavation process.

There are also 4 super high paying symbols which only appear in the expanded reels which take the form of green, yellow, blue, and red gems.

The red gem is the highest paying of all with 5 on a payline worth 4x the stake. Identical symbols on 3 or more adjacent reels constitute a win, regardless of their position on the reel. Every additional identical symbol on a reel adds a multiplier to the win. The bonus symbol, which only appears on reels 1, 3, and 5 is a fierce looking drill-head.

Expanding reels enable up to 16,807 ways to win and can help to trigger a free spin round with super high paying symbols. Trigger another bonus round by landing all 3 bonus symbols.

Landing any bonus symbol causes the dwarf to pull his lever and bury down one row, thus revealing more symbols. More ways to win can add to existing wins or create new ones. The Dwarf unearths two rows when two bonus symbols land. 3 bonus symbols landing creates 3 new rows as well as triggering the free games in the bonus round.

Gemstones are occasionally unearthed during the digging process which is then added to the boxes to the right of the gameboard. Fill the boxes to unlock Collection Free Spins.

Unearthing 5 identical gemstones trigger 5 Collection Free Spins. These are played on the expanded 5x7 board and feature the super high paying symbols alongside regular symbols. 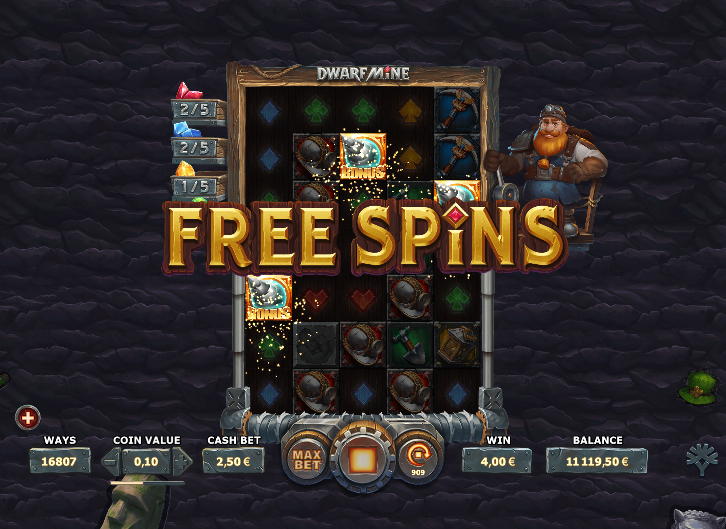 Our Thoughts on Dwarf Mine

Dwarf Mine as a slot has a lot going for it. If offers a decent number of features, has relatively good potential (the maximum win is around 4000x the stake), and can be fun to play. The design and details are also top drawers.

However, there are often protracted periods between wins, let alone between features, certainly more than I'd expect for a mid-variance game. The Collection feature also seemed incredibly difficult to trigger, and when triggered, can be very disappointing. The biggest wins come from the regular scatter triggered spins that are free which is significantly easier to activate – but the wins aren’t spectacular.

Having played several thousand spins on the newly released Dwarf Mine slot, I’m still undecided on its overall merits. A minor tweak or two and this could either be a good mid variance game or a good high variance game. As it stands, it’s a passable mid/high variance game.