Durian Dynamite by Quickspin released on 27.03.19 is a 5-reel & 3-row online slot with 20 paylines and a 96.22% RTP. This is a fruit-themed game offering players a max win of up to 2515x their stake. Durian Dynamite can be played on all devices from €0.2 to €10 per spin and is considered a high volatility game. 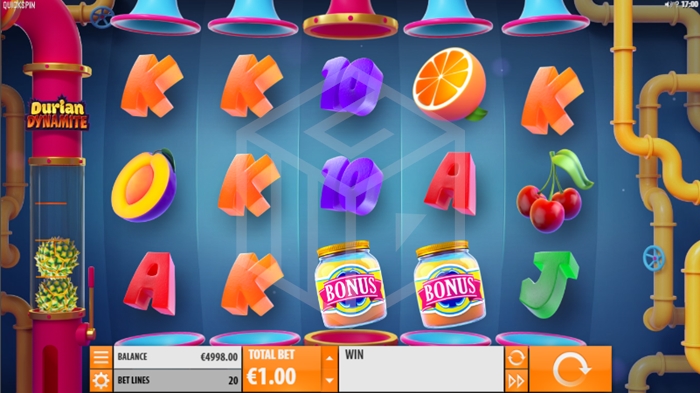 Durian Dynamite is Quickspin’s first ever 3D rendered game and it’s a colourful, fun and fruity one at that. The design is of a cartoon factory full of pipes of funnels through which various colourful fruits pass. In fact rows of fruits shoot out of 5 funnels at the top of the screen and into 5 funnels at the bottom of the screen. These rows of fruit make up the reels and the entire factory forms part of the game board.

To the left of the reels is a large red pipe with a see-through middle section containing a number of Durian fruits known as “Dynamite Wilds” which come into play during gameplay. This is known as the Dynamite Supply

The low value symbols which sit alongside the fruit are the standard royals 10-A. High value symbols are represented by cherries, grapes, plums, oranges, and watermelons. The watermelon is the highest value regular symbol with 5 on a payline worth 25x the stake. The wild symbol, which takes the form of a yellow ‘W’ sitting on a thorny Durian fruit, is the highest paying of all with 5 on a payline awarding 50x the stake. The scatter symbol only appears on reels 2, 3, and 4 is a jam jar with ‘BONUS’ on the label.

The Dynamite Launch occurs in both the base and bonus game. There is also a free spins round with a free spins upgrade picker. 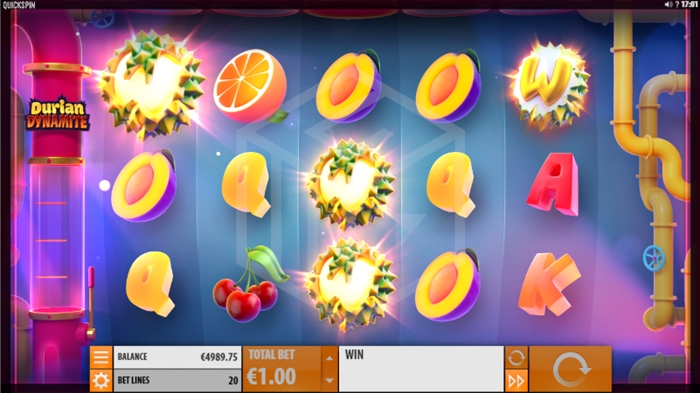 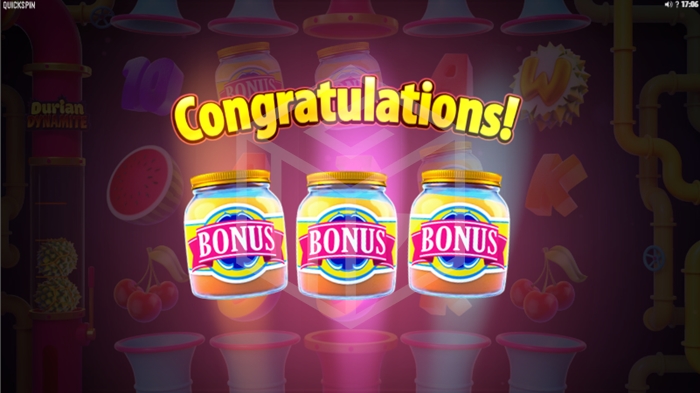 6 Free spins are triggered by landing 3 bonus symbols on reels 2, 3, and 4. Prior to the onset of the bonus round the player gets to increase their winning chances via the free spins upgrade picker

Up to 3 more upgrade picks may be awarded before the free spins begin. During free spins, there is an increased likelihood of Dynamite Reels activating.

Our Thoughts on Durian Dynamite 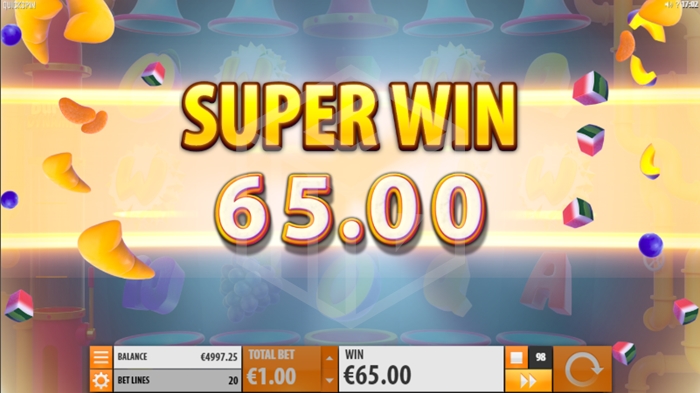 Although at first glance Durian Dynamite might sound confusing, in reality, it is an extremely easy game to follow, and a pretty addictive one at that. Everything about this game screams ‘fun’. The design and soundtrack are both full funky, fresh and full of colour. The Dynamite feature is suitably explosive and can result in some tasty wins.

One of my favourite aspects of the game, however, is that unlike many high variance games you are just as likely to win big in the base game as you are during free spins. The Dynamite Launch Feature is where the big bucks normally rain down, and this can be activated in both the base and bonus game. A lot of high variance games are so reliant on the free spins round for the big wins that the spins in between can seem like an endless drag – not so with Durian Dynamite.

It has to be said that the 2,512 x stake maximum win seems small in comparison with some of the massive ‘potential’ wins available with some of today’s games. However, unless you’re hell-bent on winning one of those mythical mega-wins, you’ll find this game has more than enough potential to make it a worthwhile investment.

Durian Dynamite may not break the mould, but it’s a mighty fine game with a great future ahead of it.