As you might expect from a slot with 5 reels and 7 rows, Dungeon Quest is designed primarily as a portrait-oriented game, an area which NoLimit City has observed that the sector is lacking, so is, therefore, more suited to mobiles and tablets. Playing the PC version the large amount of otherwise dead space either side of the games board is filled with a quite detailed scene of the apparent ‘explorers’ of the game (the Elf, Sorcerer, Knight, and Viking) on one side flying towards the scary looking entrance to the mine on the right, which appears to be the open mouth of a large stone dragon. 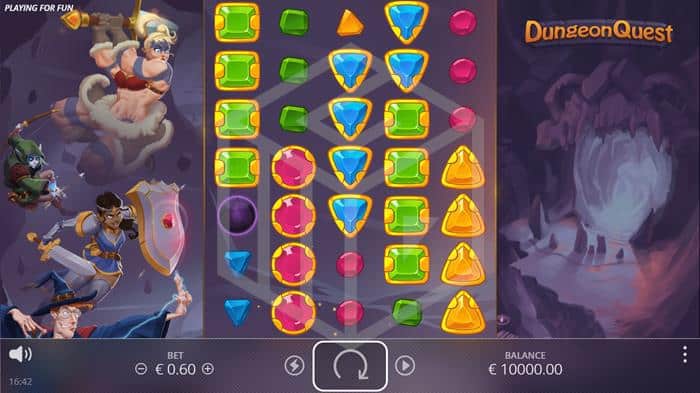 The board and symbols themselves look rather boring on a PC, just a translucent dark background filled with 4 colours of stones with the occasional wild and scatter thrown in. Again, however, this is primarily for use as a portrait mobile game where it doesn’t look as pedestrian as the symbols stand out a lot more when they fill the entire screen.

The explorers I mentioned earlier don’t appear on the reels but do make fleeting static appearances in one of the special features described below. 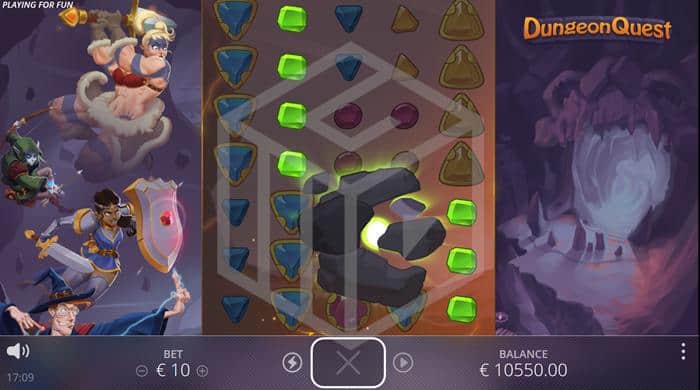 Randomly triggered in the base game a Power Stone will occasionally come crashing down to occupy a 2x2 space on the game board which will then turn wild. Also, each Power Stone contains one of the coloured ores and everyone on the board with the corresponding colour will also turn wild.

In the other randomly triggered base game bonus, ‘Gem Forge’, one of the previously mentioned characters will briefly appear on the game board (each represents a different coloured stone – the Knight has a red gemstone on her shield for example). If the Knight appears then every red ore which lands on the subsequent spin will turn into a red gem at the end of the spin which will then combine with any adjacent red gems which have also landed to hopefully net the player a big win

If scatters land on reels 1, 3, and 5 then you’re awarded 4 Alchemy Spins. On each spin, a different coloured ore is chosen and at the end of that spin any of those ores which land are turned into sticky wilds which remain in place for the remainder of the spins. By the end of the spins, you can expect to be reeling in some big wins. 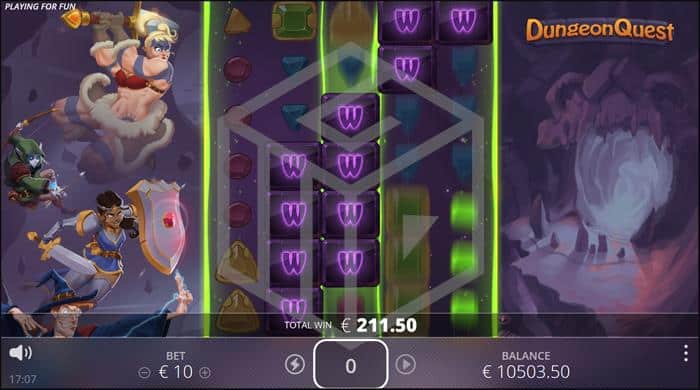 Our Thoughts on Dungeon Quest

I’ll have to admit I didn’t much like the look of Dungeon Quest when I first loaded it up. It really didn’t look much, especially on a pc. I’d still go so far as to say the whole gemstone thing is a bit tired and uninspiring. Despite this, however, I found it very playable, and the features all seem to land with considerable regularity and the wins they deliver may not be mind-blowing but (in my admittedly limited experience) they didn’t seem half bad either. Perhaps this isn’t one for real high variance lovers, but I figure it has enough in the tank to keep NoLimit City moving in the right direction.