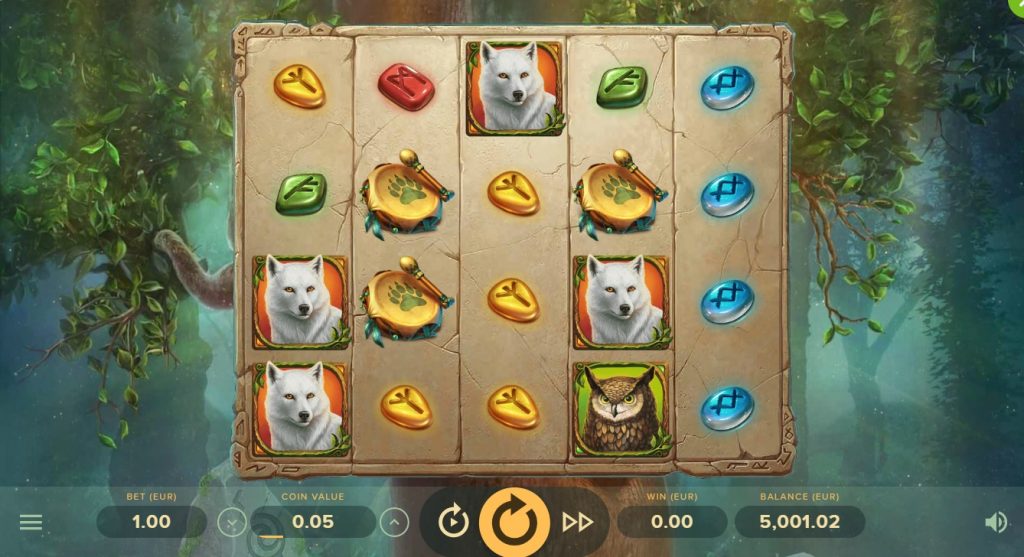 NetEnt is renowned for its stylish design, and one thing you can say here is that visually, it doesn’t disappoint. There may not be too much going on in terms of animation outside of the spinning reels, but the setting of a sacred Druid tree set in the midst of an enchanted Celtic forest is beautifully created. Shards of light pierce the dense mist which engulfs much of the forest while fireflies flit about the wonderfully detailed trees. The gameboard takes the form of a cracked stone table with border. During the bonus round the action moves to the base of the sacred tree where equally sacred stones magically glow. The gameplay is accompanied by a rather nice, tranquil refrain which fits perfectly with the game’s theme.

Low value symbols are blue, green, yellow, and red runestones. High value symbols include an Ocarina flute, a drum, an owl, and a white wolf. The wolf is the highest paying, awarding 5x the bet size for 5 on a payline. All regular symbols come stacked on the reels. The wild symbols come as single symbols on reels 1, 3, and 5 in the main game, and stacked on reels 2 and 4. In the free spins round the wilds also come stacked on reel 3. Scatters in the main game come on reels 2 and 4 in the main game and take the form of a male (reel 2) and female (reel 4) Druid and appear beneath (reel 2) and above (reel 4) a stack of wilds. During the free spins round a bear scatter appears anywhere in a stack of wilds on reel 3. A payline of wilds pays the same as the wolf, 5x the bet size. The scatter symbol also acts as a wild symbol.

When a stack of wilds land on reel 2 or reel 4 with a scatter attached, the Wild Charge & Respins feature is triggered. Each Wild above (reel 2) or below (reel 4) the scatter is given a ‘Wild Charge’ which triggers a respin. For example, if the scatter appeared on reel 2 below 2 stacked wilds, then 2 respins would be triggered with all wilds (including the scatter) locked for the duration of the respins.

A stack of wilds landing on reel 2 or 4 during Respins triggers the Nudge Feature, which is essentially a chance to trigger the free spins bonus round. To trigger free spins both scatters have to appear on the board at the same time. With one scatter already locked in place having triggered the Respins, the Nudge feature shifts the stacked reel of wilds up or down (depending on which reel the stacked wilds have landed) during each Respin. The Nudge Feature ends if the second scatter appears, or when the respins end.

Our Thoughts on Druids Dream

Druids Dream looks pretty, has some delightful background music, and a couple of innovative features, but unfortunately is not one we’re likely to recommend too highly. This isn’t to say that there isn’t a market for a pretty low/medium volatility slot, because they're most certainly is. However, to capture that market then surely something a little more interesting than Druids Dream is required?

The real problem here is that the payouts are just too low. With a full line of low paying symbols only repaying 0.5 the bet size and the highest paying symbol just 5x the bet size, very rarely does a win worth shouting about. Even though the symbols are stacked, and the game pays both ways, the wins just are not good enough. You get similar payouts (in fact many are higher) with Megaways slots which pay all ways, so with just 40 paylines even a full board of most symbols doesn’t amount to much. Even the free spins round isn’t a huge reason to get excited, and it appears fairly difficult to trigger them in the first place. Perhaps this slot will do well with folks who just want to play a gentle, untaxing slot with soothing music and limited excitement. But it really wasn’t for me, especially since NetEnt already have (in my opinion) a far superior and similarly themed slot in Secrets of the Stone. In fact, Secrets of the Stone has only just been re-released with a MAX version, so it also gives you the choice to play at a low and high volatility. So, I guess that would be my advice if you’re thinking of playing Druids Dream, go back to Secrets of the Stone instead!