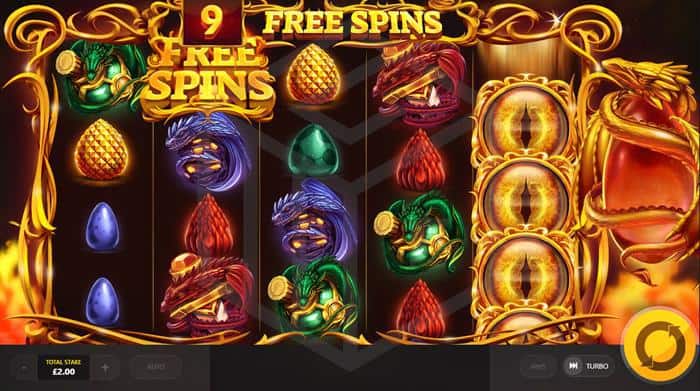 There is a strong sense of mystery when starting the video slot, and this is quickly intensified by the stunning visual effects and epic soundtrack, which plays in the background. The game itself is dark with the heavy breathing dragon along with some gold coins to light up the screen. Symbols shown on the games five wheels include dragon eggs in various colours, baby dragons along with the eye of the dragon being the best paying symbol.

Dragon's Fire has several special features. There are especially two players should keep an eye out for, being the Fire Blasts feature and Dragon's Fire Free Spins. The Wild symbol in the game along with the Dragon Eye can both show up stacked on the reels. If any of these cover the whole screen, they will give a prize of 200 times the stake. This amount could definitely be higher.  That said, due to the 50x multiplying potential, we can see winnings up to 10000x! 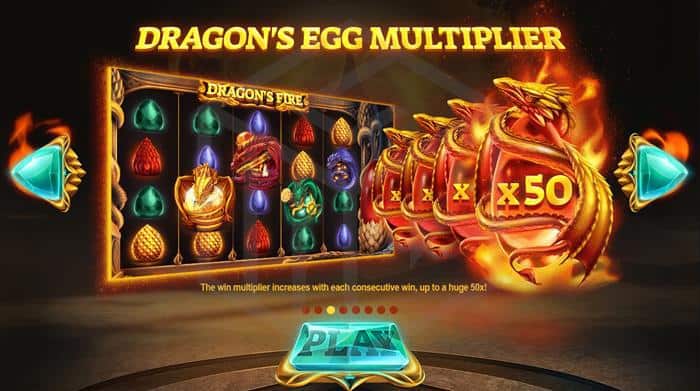 On the right side of the screen, there is a red egg visible throughout the rounds. The egg activates after a winning spin and awards the player with progressive multipliers of up to x50! This works in a way where it starts counting on the second winning spin and at the same time increase the multiplier by x1 each time there is a winnings combination.

There is no need to worry if the reels start shaking without any warning, this is just the Fire Blasts feature being activated. This can happen at the beginning of any spin in the main game. The sleeping dragon will then awake and hop on to the reels to add one of two possible reel boosters. By setting the reels on fire, they will turn single symbols into scatters or turn entire reels wild.

When 3 or more scatters show up anywhere on the reels, this will activate free spins. Players see 3 golden dragons and can choose one. This reveals exactly how many free spins awarded.

Our thoughts on Dragon's Fire

So what do we really think about this video slot? Red Tiger Gaming has created a slot which gives players plenty of entertainment both in the main game as well as when one of the many bonus features kick in. During the demo round the Dragon's Egg multiplier constantly added to our winnings and Fire Blasts feature activated several times, resulting in entire wild reels. This is without a doubt a slot we will be playing again.