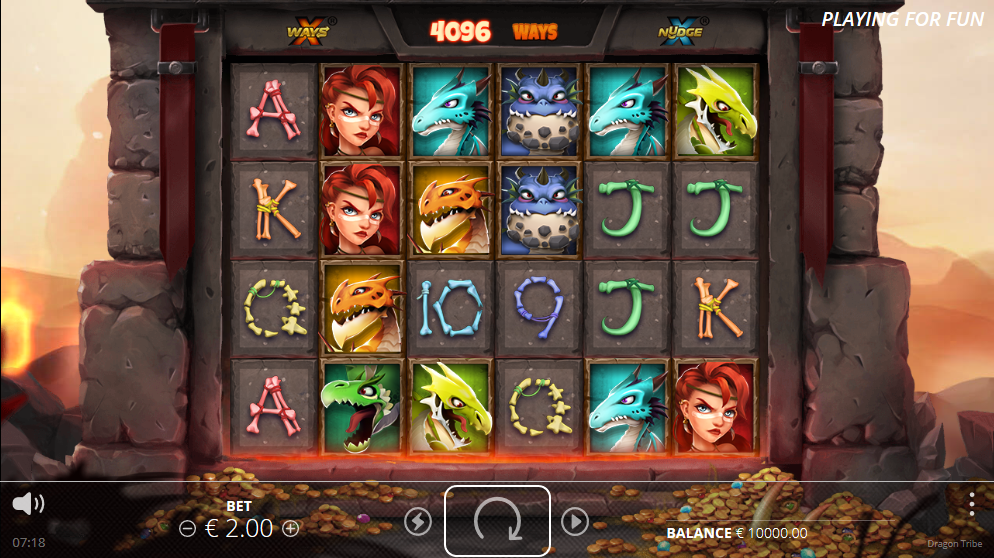 Dragon Tribe is a good-looking slot, certainly one of Nolimit City’s more impressive releases, visually. The reels are set at the entrance of a stone lair, and the symbols are made from blocks of stone. A dry and barren landscape is visible beyond the lair with fires raging all around and pterodactyls flying above. In front of the lair lay gold coins & treasure, the reward for anyone who might brave the fiery Dragon’s Den. The soundtrack is suitably tense, dramatic, and fantastical – perfect for a fiery, fantasy-themed slot.

Low-value symbols are the standard 9-A playing card values. High-value symbols are blue, turquoise, green, yellow, and orange dragons. The highest value symbol is the heroine dragon-slayer which awards 3.75x the stake for 6 symbols on adjacent rows. The xNudge® wild is a falling dragon’s egg, the xWays® mystery symbol is a fire cross, and the scatter is a blue diamond egg.

After a win lands, the winning symbols disappear to be replaced by symbols cascading from above.  Any new win created by this process allows the cycle to repeat. These wins are known as ‘Reaction Wins’ and they continue until no new win is created. At this point, a new spin begins.

An xWays symbol reveals both a random mystery symbol and also acts as a reel expander, transforming from a single symbol into 2 or 3 identical regular symbols. The maximum height a reel can expand to is 6 symbols.

Wherever an xNudge Wild symbol lands, it drops down to the wile bottom of the reel before transforming into a fully wild reel. The number of steps the xNudge Wild takes to reach the bottom of the row is then added in the form of a win multiplier. For example, if the wild symbol lands on the second row of a reel it falls three steps to the bottom and therefore becomes a 3x multiplier wild. As up to 4 reels can expand up to 6 symbols the maximum multiplier on a reel is 6x. Multipliers can work together and if more than one form part of a win then the multipliers add together to a maximum of 24x. 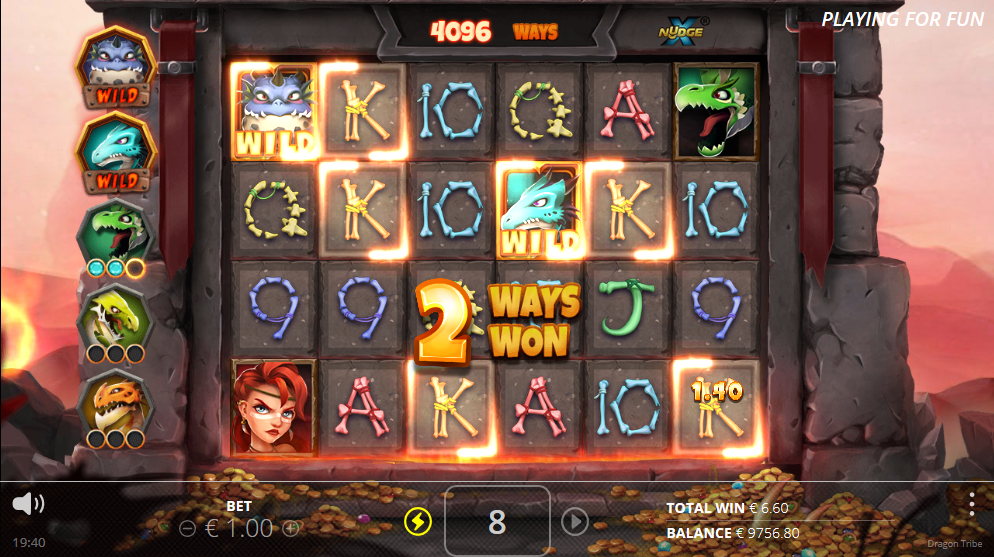 Dragon Spins are the less volatile of the two choices but still offer wins of up to 11,000x the bet size as well as more wins. Dragon Spins also feature xNudges.

During both the free spins rounds, each of the four dragons turns wild once they have appeared in three winning cascades. Two dragon spins are awarded each time a dragon turns wild.

27,000x the bet size can be won playing the more volatile of the free spins rounds, although wins are less frequent. Dragon Spins Extreme offers both xWays and xNudges, with a minimum of one xWays Mystery Symbol guaranteed on each initial cascade in Dragon Spins Extreme.

Our Thoughts on Dragon Tribe

Dragon Tribe is an ambitious release. Both the xNudge and xWays features work well in combination with the cascading symbols mechanic to offer good wins, even during the base game. The dragon spin features are tough to trigger but they can both be highly rewarding. Being able to choose your volatility during the bonus round should also widen the appeal of Dragon Tribe.