Dragon Maiden certainly takes some inspiration from Game of Thrones and is set to cash in on the popularity of fantasy-themed slots. The game board itself has a green, dragon scale background, while the backdrop to the board is of a hazy sky of orange and whites punctured by the peaks of a mountain range, all played out against a slightly ominous medieval soundtrack – setting the mythical adventure tone very nicely. 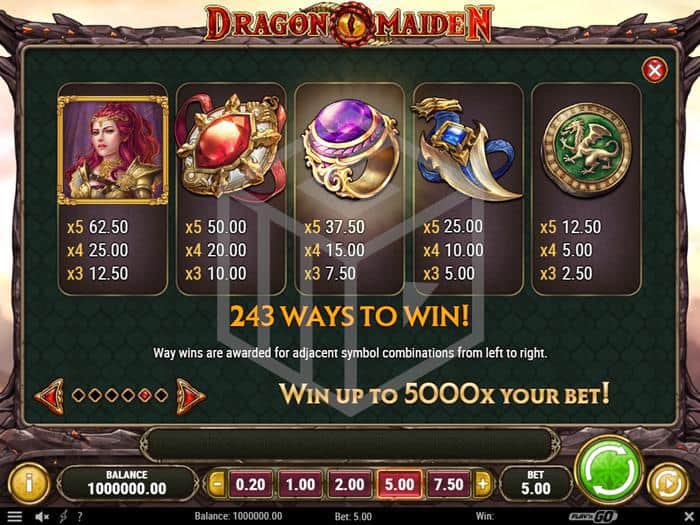 The four lowest value symbols are made up of the four playing card suits, while the five higher value symbols are represented by the usual fantasy themed objects; ancient coins, daggers, bejewelled rings and necklaces, and the Dragon Maiden herself. The Maiden is the highest paying symbol with 5 across the reels worth 12.5x the bet size. The Maiden can also randomly decide to act as a wild or expanding wild, meaning that it is possible to completely fill the 5 x 3 board with the Dragon Maiden for a huge win of 3037.5x the bet size in the base game. The scatter symbol is a scary looking fire-breathing dragon head. Land two dragons to get a re-spin, and land three or more to enter the free spin round.

Apart from the occasional expanding wild and the re-spin for landing two dragon head symbols, there is no base game feature to speak of, meaning that feature enthusiasts will be going all out to land the Dragon Maiden free spins.

Land 3 scatters to trigger 8 free spins. If you manage to land 4 or 5 scatters then you’ll be awarded 10 or 12 spins respectively. During the free spin round landing the dragon on any reel will increase the height of that reel by one symbol, hence increasing the number of ways to pay. Each time a reel reaches the maximum allowable height of 6 symbols, you’ll be awarded a Golden free spin which will play out at the completion of the free spin round. A Golden free spin will expand the reel set to the maximum of 5 x 6 thus increasing the ways to win to 7,776. If you manage to win all 5 Golden free spins, you could be looking at a massive win at the end of the bonus round.

Dragon Maiden is a nicely designed slot with an entertaining bonus round. That said there are certainly more entertaining fantasy slots out there (think Immortal Romance, White Rabbit, and Game of Thrones itself), but that doesn’t make this a bad slot at all and it will certainly find a market among fantasy slot fans, high volatility players, and anyone who favours the 243 ways to pay format.