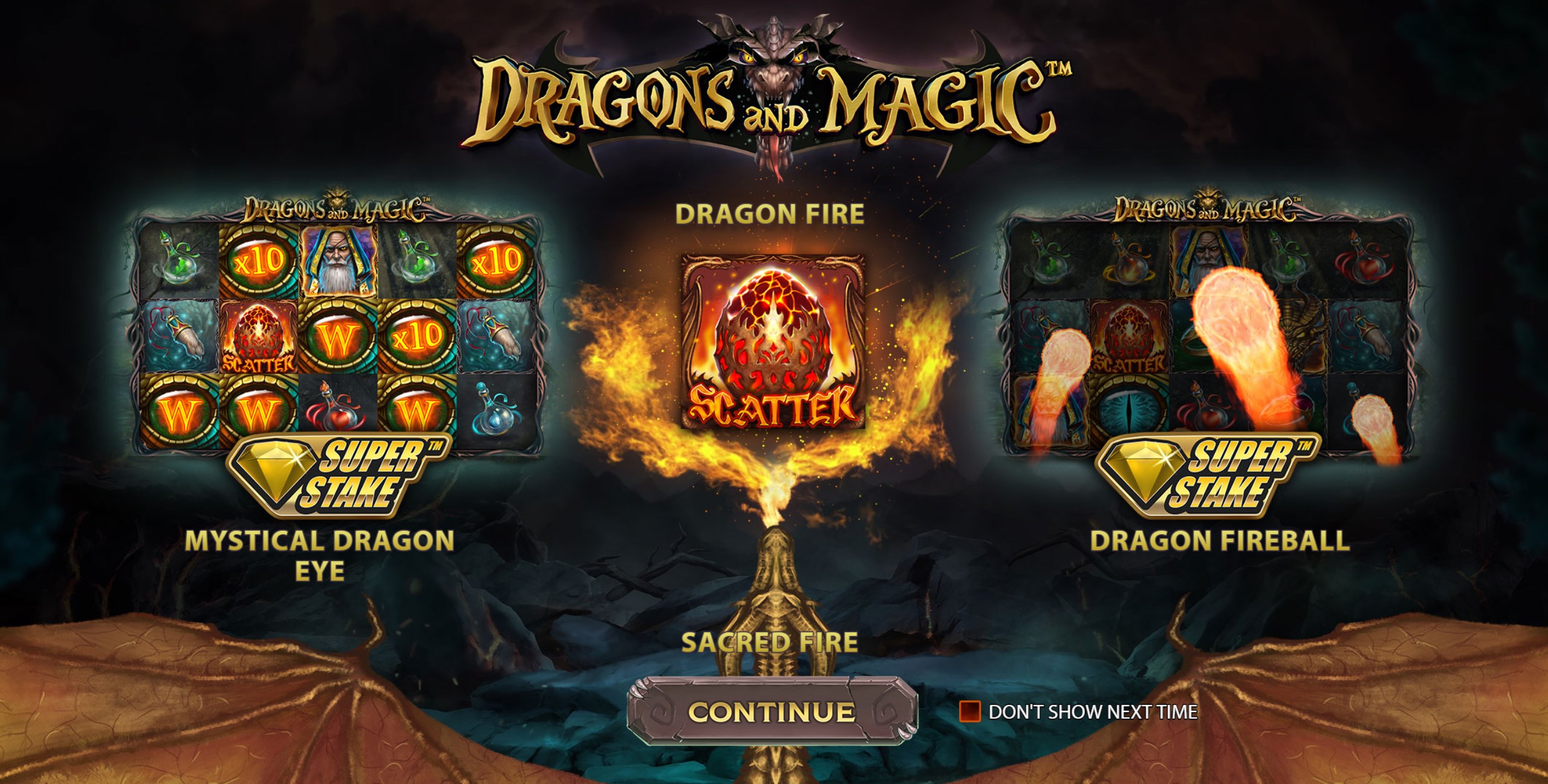 As mentioned above there are actually quite a number of things going on in Dragons and Magic. Starting with the special symbols as well as a Super Stake option you can choose to activate, a Dragon Fire feature, a Mystical Dragon Eye feature, and finally a Dragon Fireball feature.

As mentioned above, you will be seeing a total of 4 special symbols throughout the game. The scatter symbol is represented by a flaming dragon's egg. This symbol will be the one to trigger the Free Spins feature, being able to reward you with up to 50 free spins.

Next, you have the bonus symbol, which is the Dragon Egg symbol, however, these are only active during the Free Spins feature. There are also two different wild symbols in play, with a wild symbol represented by the eye of a dragon. This symbol can substitute all other symbols of the game with the exception of scatter symbols and dragon egg symbols. The Multiplier Wild symbol is also represented by a dragon's eye, however, it will also show a multiplier, this symbol is only active when Super Stake is activated.

Upon loading the game you will be asked if you wish to activate the Super Stake mode. If you choose to do so, you will be getting some extra chances of hitting some pretty good wins. You will be doubling your bet for the chance to hit bigger and better winning combinations throughout the game. While Super Stake is activated, an extra feature might be triggered for as long as this mode is active. The average hit frequency for this feature is once every 32 spins.

The Super Stake mode will offer the following two features:

Mystical Dragon Eye feature – Random symbols will be replaced with Wild symbols of Multiplier Wild symbols. Dragon Fireball feature – Fireballs will land on occasional positions and will be turned into either a regular symbol or one of the 3 special symbols of the game.

You will also be seeing the dragon egg symbols in the Free Spins feature as that is the only time they are activated. They can land on the 2nd, 3rd, and 4th reels. When there is only 1 dragon egg symbol, it will increase the height of that reel by 1 if the height of the reel is less than 6 rows. When landing 2 or more dragon eggs during a free spin, then the Dragon Fire feature will be triggered. Two of the symbols will turn one reel wild while three of a kind will turn two of the adjacent reels into a full-reel wild for that free spin. 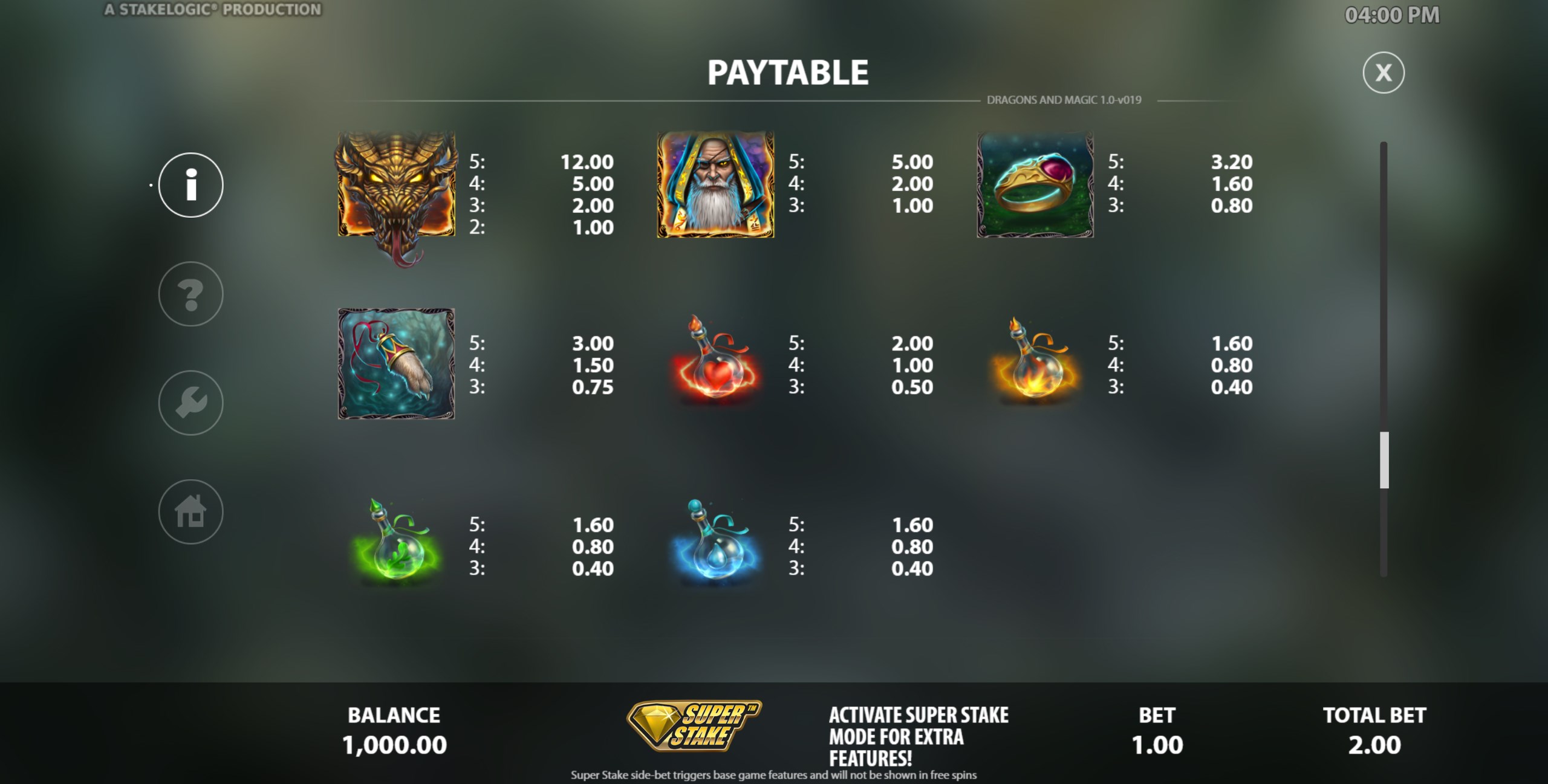 The design of the game gives off a great first impression, getting us straight into the fantasy theme. In the background, you will be seeing dark and mysterious woods, with crooked branches and roots almost making it impossible for any daylight to shine through. There are also some fireflies floating around, creating even more of a magical atmosphere. The reel set itself has been framed by thorned branches with a dragon placed at the top of the reel, overlooking everything that is going on.

We were also happy to see that there were no standard card royals in place. Instead, Stakelogic has stayed true to the fantasy theme with four different colored glass vials as the low-value symbols of the game. In addition to these 4 symbols, there are four high-value symbols including a gold ring, the wizard, a rabbit's foot as a pendant, and of course the mighty dragon. The dragon will, of course, be the highest valued symbol and you will also only need two of a kind to create a win, while 5 of a kind will give you 20x your stake.

Our Thoughts on Dragons and Magic

Dragons and Magic is overall a pretty good slot, giving us a great impression from the very beginning. There really is nothing bad to be said about the graphics and design of the game, as Stakelogic has made sure of creating a proper fantasy feel in everything from the background and animations to the symbols on the reels. We also especially enjoyed the free spins feature, giving you a little extra entertainment through the dragon eggs and expanding reels.

However, you should know that the free spins feature isn't all that easy to trigger, meaning the game can end up kind of boring pretty quickly if you're not too lucky. The same goes for the Super Stake feature, should you choose not to activate this feature, you can expect the game to have a pretty boring outlook as there won't be 2 random features available. All in all an entertaining and great-looking game, but remember to activate the Super Stake feature if you really want the complete experience.