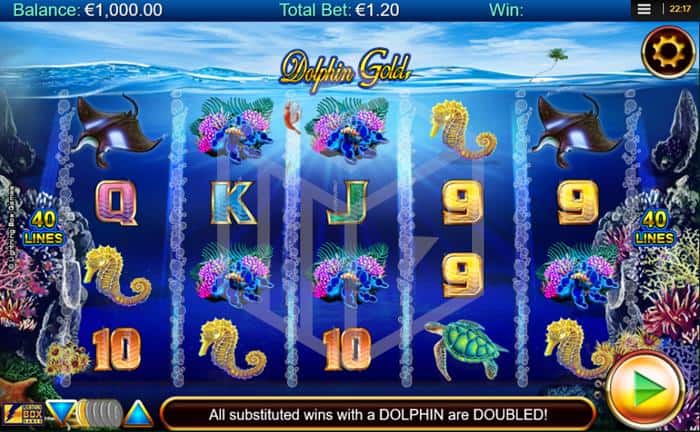 Dolphin Gold is set just below the surface of the ocean with the frameless, underwater game board taking up the entire screen where the reels are only separated by columns of bubbles. What little space remains to the left and right of the ‘reels’ is taken up by colourful coral reefs, starfish, the occasional animation of a sea snail, and yet more ocean. There are also animations centre screen as a family of shrimp scuttle up the ladders of bubbles acting as reel dividers. The gentle sound of wave crashes and underwater bubbles rising to the surface can be heard in the background throughout the game.

The low-value symbols are taken by card values 9 – K, followed by Corals, Seahorses, Fishes, Turtles, and Manta Rays. Manta Rays are the highest value symbols with 5 on a pay line paying 12.5x your stake. The Blue Dolphin acts as not only the wild AND the scatter symbol, but it also acts as a 2x multiplier for every win. As such the biggest line win is in fact 5 of a kind featuring Manta Rays with at least one of those being the Dolphin Wild. As the Blue Dolphins only appear on reels 2, 3, and 4 it isn’t possible to land 5 in a row of that particular symbol. There is also a Gold Wild Dolphin which only appears during free spins and appears on reels 2, 3, 4, and 5. All Dolphin symbols can appear fully stacked on the reels. 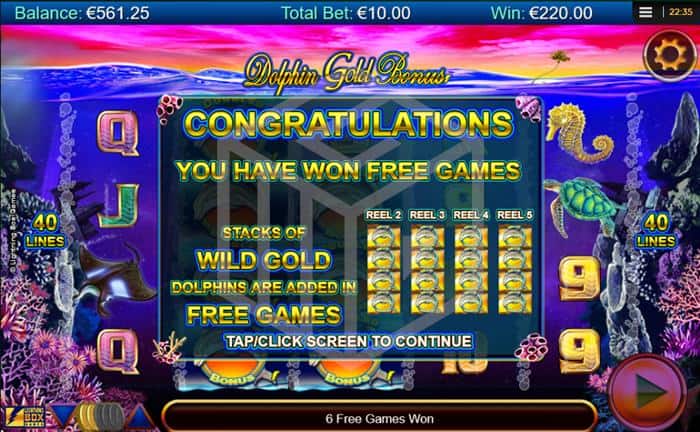 To activate free spins, you must land at least 6 Blue Dolphins on reels 2-4 during any one spin. As the Dolphin symbols appear stacked, it is possible to land up to 12 across the three reels in which they appear, and the number of free spins you are awarded depends on how many Dolphins land. For 6 landed Dolphins, you’re awarded 3 free spins up to a maximum of 21 free spins for landing all 12.

During the free spins, round stacks of a Gold Dolphin are added, not only to reels 2-4 but also to reel 5, meaning that it is possible to fill 16 or the 20 symbol spaces with Dolphin Wilds during free spins which can help to build some very decent wins. Gold Dolphins are not only wild but like the Blue Dolphins, they also act as a 2x multiplier for any win they are involved in.

Free spins can be retriggered but in this instance, only the Blue Dolphins act as triggers for further free spins. 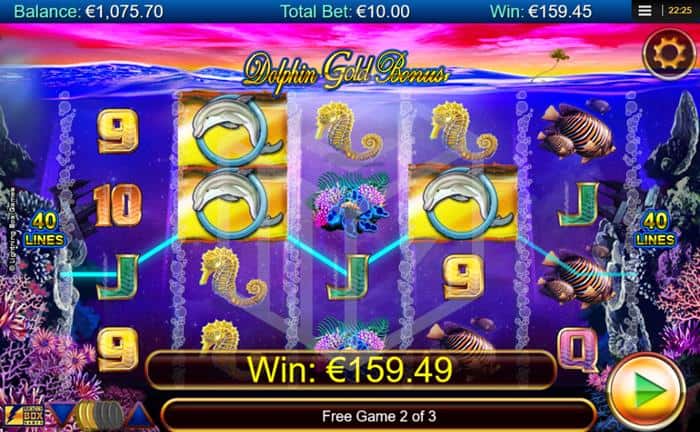 Dolphin Gold is a solid if unremarkable medium variance slot. It looks good and is fun to play. The presence of stacked wild multipliers means that the base game wins tend to be better than on most online slots which helps keep the game flowing in between free spin rounds. Also, the free spins occur with a reasonable frequency, although quite often you’ll enter them with just 3 spins.

On the downside, it would have been nice to see perhaps an additional base game feature of some sort. Also, I’m not too sure this game will appeal much too hardcore grinders as the maximum win even with multipliers is only 400x the stake – a decent win for sure but nothing which will excite the reel, big win hunters, out there. Nevertheless, we can recommend this as a decent, fun, and well-designed medium variance slot for anyone out there who fancies a punt.