Dia De Los Muerto by Endorphina released on 25.10.2018 is a 3-reel & 3-row online slot with 5 paylines and a 96% RTP. This is a mexican -themed game offering players a max win of up to 2000x their stake. Dia De Los Muerto can be played on all devices from €0.1 to €50 per spin and is considered a medium volatility game. 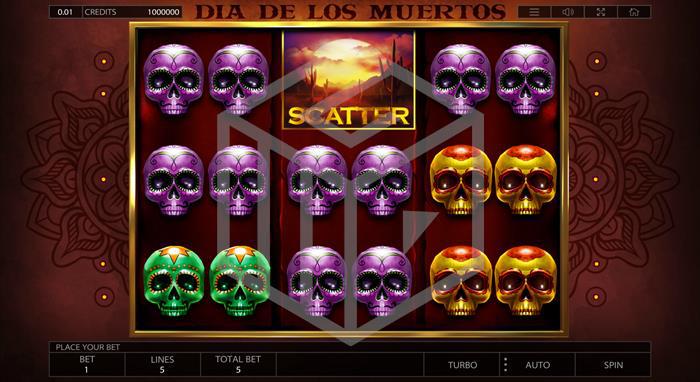 Dia De Los Muertos is a nicely designed slot completely in keeping with the theme of Day of the Dead. The soundtrack is also suitably haunting with a single Spanish guitar playing a sombre refrain interspersed with some dull thudding drums in the distance and the occasional chime from a churchyard bell.

The symbols include some impressively detailed skulls (sugar skulls are often used to decorate departed relative’s shrines and graves during the celebrations), a superbly drawn image of La Catrina  (a female skeletal icon of Dia De Los Muertos), another of a male skeletal figure in a sombrero, and a scatter symbol showing an arid Mexican landscape at sunset. The purple, red, green and golden skulls are the lower value symbols with the male figure and Catrina the highest value. Three Catrina’s in a row pay 100x the bet size (based on playing all 5 lines), but this goes all the way down to just 1x bet size for 3 purple skulls. 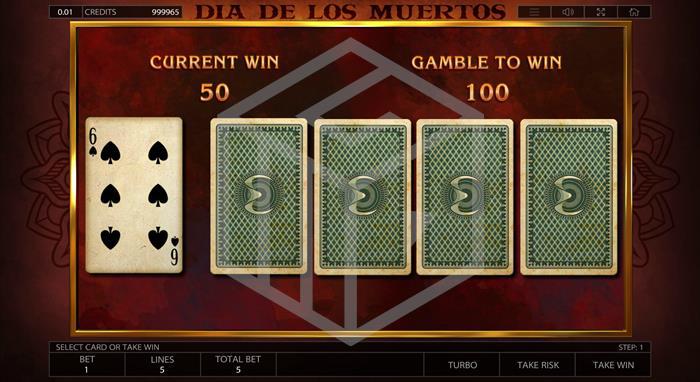 A feature common to Endorphina games, the gamble option allows you to risk a win via the turn of a card. If your card is higher than the card you see being dealt for the dealer, then you double your money. This continues until you take the win, or you lose the gamble. The dealer’s card will change after each gamble. 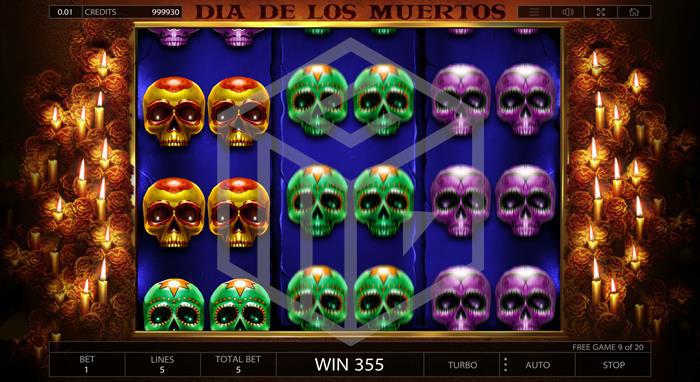 When I first looked at Dia De Los Muertos I was impressed with the design, and Day of the Dead is always a popular theme so I was eager to get spinning on what appeared to be a 6x3 reel slot. I was, however, pretty disappointed to find that in fact each skull symbol had two skulls per reel and it was, in fact, a 3x3 slot with just 5 pay lines. I know some players enjoy the classic 3x3 set up so I would usually cut the game a little slack here but the fact that there are only 6 paying symbols (plus the scatter), two of which (the male and La Catrina) are considerably harder to land than the skulls means that smallish skull wins are coming in left, right, and centre. The least I’d expect from a 3x3 slot with minimal pay lines is a high volatility game with some big pay line wins but playing Dia De Los Muertos I landed a full board of identical symbols so often that it offered zero excitement at all. Usually, if you land a full board of anything you’re looking at a hefty pay day­s, so that was disappointing.

That said the free spin round was not bad at all. The wilds add more significant wins and the few times I got into the feature the spins tended to retrigger fairly regularly, and I made several big scores. However, overall Dia De Los Muertos didn’t really live up to the expectations set at first glance and is a pretty pedestrian game, albeit with an OK free spins round and a pretty design.

This game is available on top-rated online casinos that are both fully regulated and licensed by the UK Gambling Commission and/or the Malta Gaming Authority. Pick one and grab yourself a great promotion while you check out our best casino bonuses section.