The popular gemtastic Dazzle Me has been given a Megaways facelift! At first glance, this beauty of a video slot looks very similar to the original game, but with a major overhaul on game mechanics. 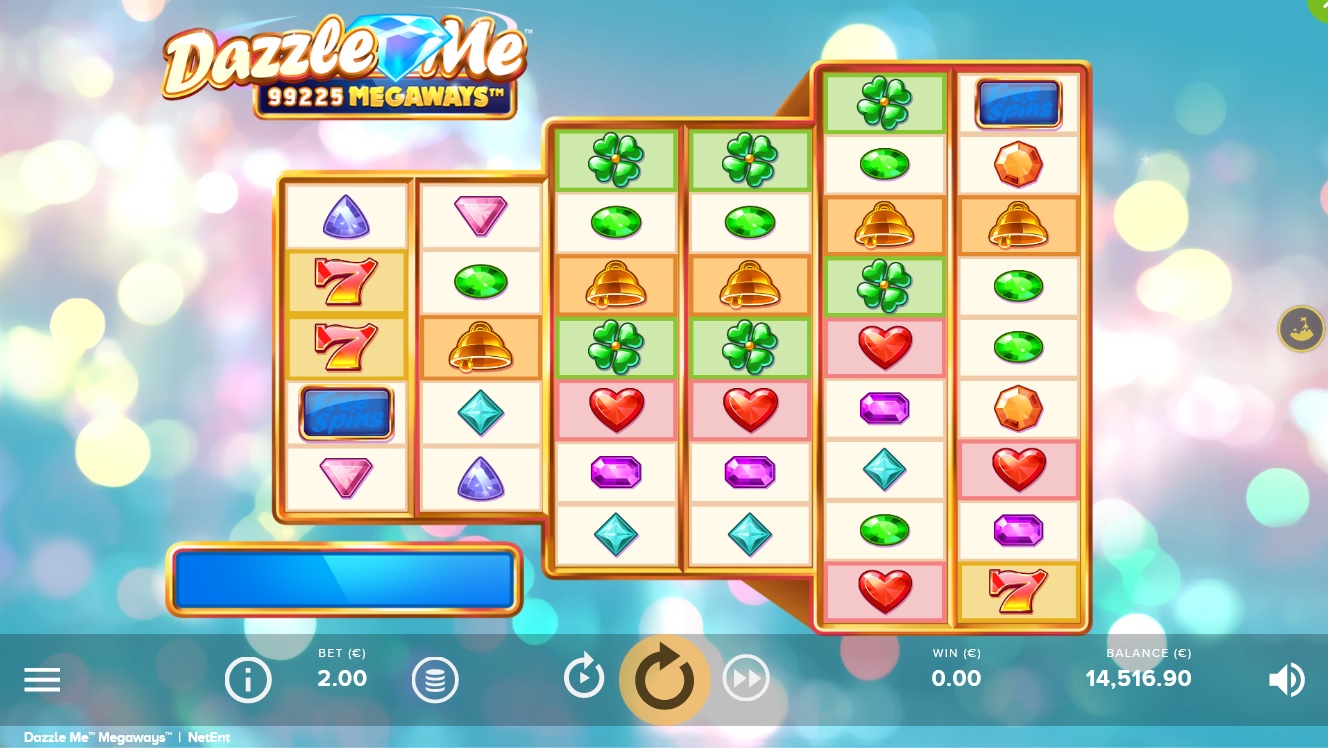 Although released back in 2015, NetEnt’s gem-themed slot, Dazzle Me, continues to perform well to this day. It comes as no surprise then that the gaming giant has decided to give it a Megaways facelift to squeeze a little more juice from the title.

The same style of reel set which sees the reel sizes increase in height from left to right carries over from the original game, except with one extra reel to make 6. The ways to win, variance and winning potential have also all been raised, making Dazzle Me Megaways a wilder experience than the original incarnation.

Avalanche reels with reaction wins are operational in both the main game and in the bonus free spins round. Both rounds also benefit from ‘Dazzling Wild Reels’, another feature which will be familiar to fans of the 2015 game.

How to win big in Dazzle Me Megaways – Free Spins 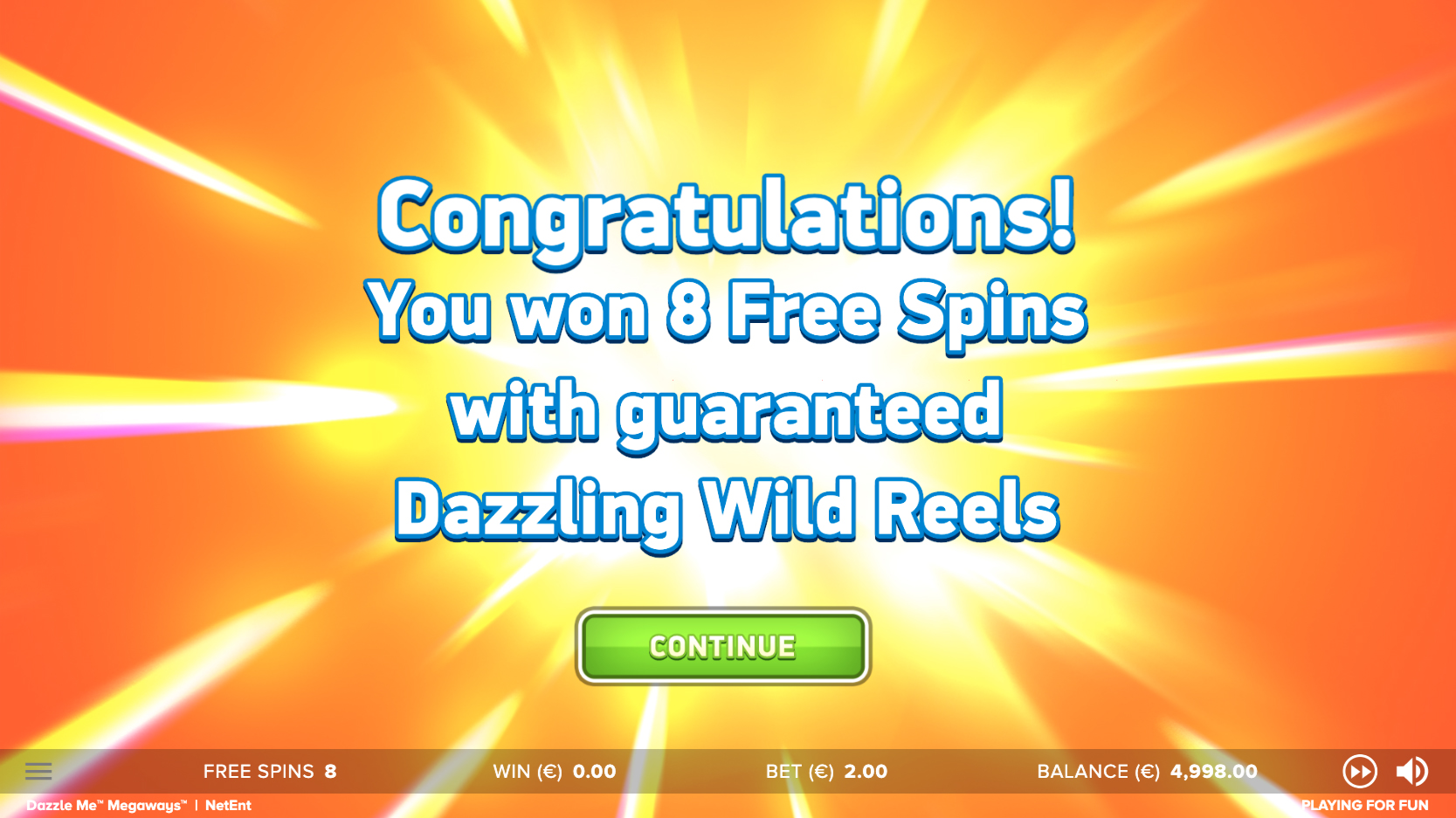 As with the original game, the biggest prizes are to be found in the game’s scatter triggered free spins feature. 4 scatters awards 8 free spins, with any other scatters landing on the triggering spin adding 4 free spins each. 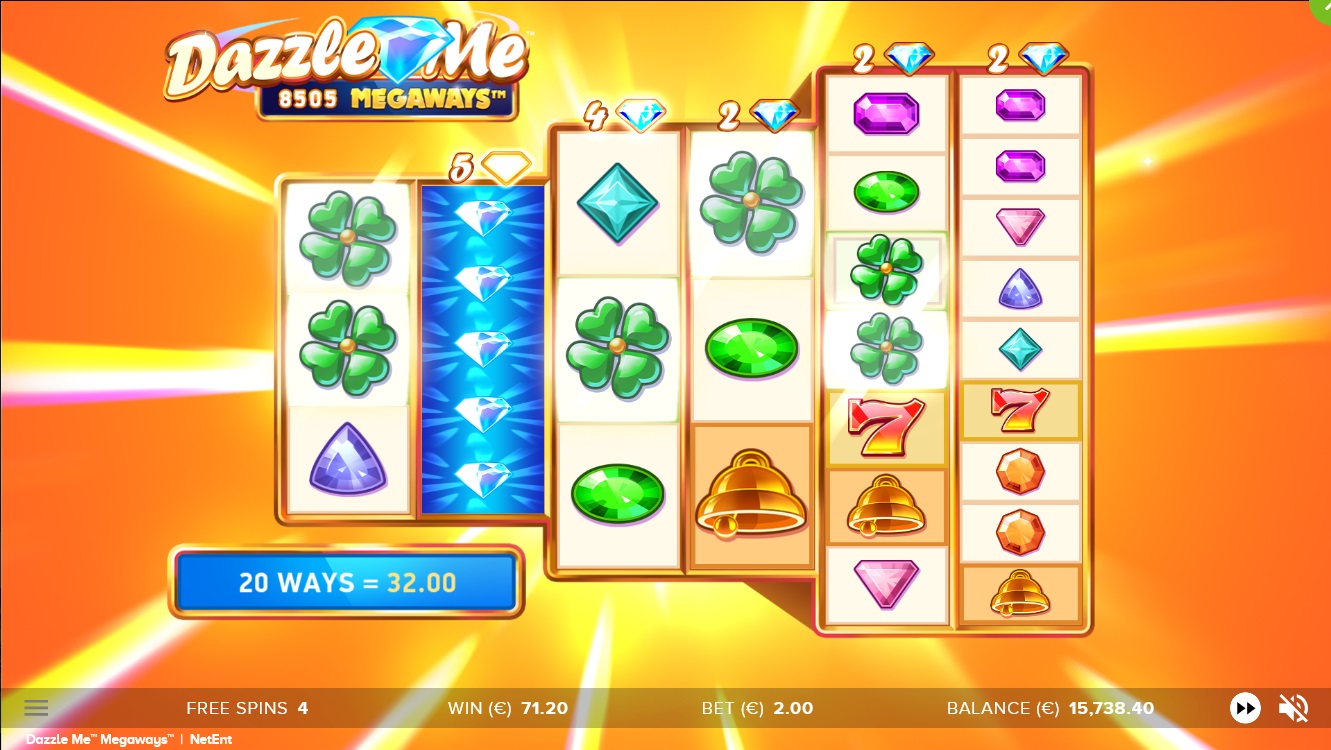 An Avalanche takes place each time a winning combination of symbols lands. Once the win has been calculated, the winning symbols explode to be replaced by symbols falling from above. Avalanches continue on the same spin credit until no new wins are formed.

For those unfamiliar with Megaways slots, the number of paylines, or in this case ‘Megaways’, changes every spin. Dazzle Me has a fairly unusual reel set up with the first two reels containing less symbols than the second two reels and the second two reels containing less symbols than the final two reels. In this instance the first two reels contain a maximum of 5 symbols, the next two reels a maximum of 7 symbols, and the final two reels up to 9 symbols. All reels contain a minimum of 2 symbols per spin and the number of symbols per reel changes every spin. In Megaways slots, winning combinations occur from the leftmost reel and pay combinations of 3+ matching symbols on adjacent reels. As such, the maximum number of Megaways occurs when all 6 reels land their maximum number of symbols. In this case that would be 5x5x7x7x9x9 which totals 99,225 ways to win. 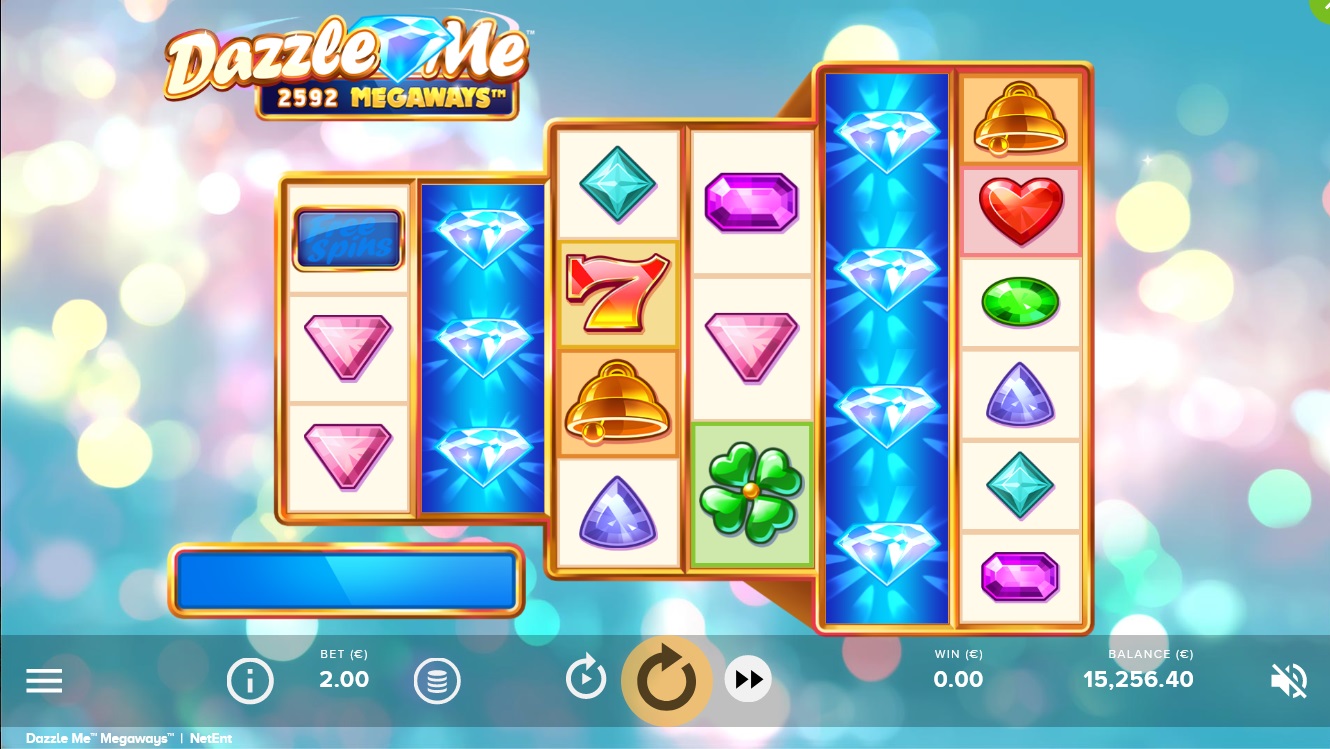 Look and Feel of Dazzle Me Megaways

NetEnt have retained the look and feel of the original game almost to a tee. The gameboard occupies slightly less of the screen in the Megaways version (despite containing more reels and symbols), with more of the twinkly spotlights in the background. Other than that, it is a carbon copy, looks-wise. During free spins, the background changes to a bright orange with shafts of light emitting from behind the game board, as though the reels are covering the sun.

Symbol values peak at 3x the bet size for 6 adjacent red 7’s, so the payouts are quite low, but they can be abundant. The same symbols are used as in the original and you can see the full paytable below.

In terms of playability, fans of the original are sure to love it, with the avalanche reels and additional ways to win adding a little more depth to the game. The Dazzling Wild Reels do not link as they do in the original, but they produce even bigger wins due to the nature of a Megaways game. However, it has to be said that triggering the free spins can be a chore. I’m not sure of the actual hit rate due to the lack of available figures at the moment, but from my experience it can take hundreds and hundreds of spins before triggering the bonus round. With only the Dazzling Wild Reels feature to break up the monotony, this can get pretty boring. Wins when you get there can be hit and miss (as with any Megaways free spins bonus to be honest), but with the Dazzling Wild Counters increasing by the spin, there is also plenty of excitement to be had.

Dazzle Me Megaways is a decent choice of slot for players who are not so keen on volatile slots. With its medium variance maths model, wins are frequent enough to get some decent bang for your buck.

In summary, although a very good mid-variance slot, I wouldn’t say this game is the greatest Megaways adaptation in the world. However, the popularity of the original makes this a safe bet to give NetEnt decent returns in the long run.