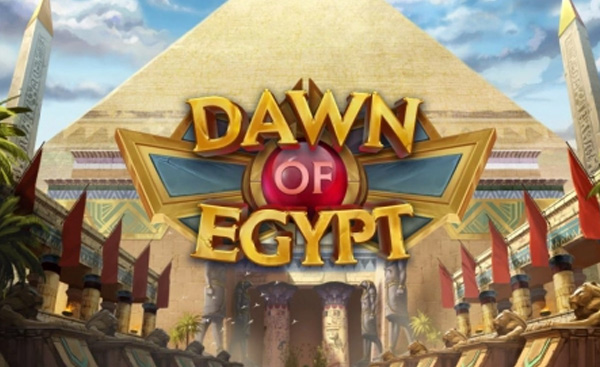 Play Dawn of Egypt on

As ever the Play’n GO team have done sterling work on the design, although after so much practice with this theme and these symbols that’s the least you should expect by now. The gameboard takes up the majority of the screen which sits at the foot of a giant pyramid (where else?). Either side of the board sit giant gold and blue Horus birds perched on stone plinths inscribed with hieroglyphs. At the bottom of the screen, shadows of the tips of swaying palm trees are cast onto the steps below by the beating sun. The gameboard and symbols are fairly standard for the genre but bright and colourful with some nice detailing. The board is framed in gold with golden eagle wings appearing above the top of the board and the game’s logo at the centre. The symbols float above dark, solid stone reels which remain static (the stone reels, not the symbols).

Wheel of the Gods Free Spins

3, 4, or 5 scatters trigger Wheel of the Gods Free Spins. Seen before in Legacy of Egypt, the Wheel of the Gods spins to determine the number of free spins awarded. That number could be 3-9, 10, 15, or 20. During every single free spin, a random high value symbol is chosen and any symbols with a lower value which land during that spin are automatically upgraded to the chosen high value symbol.

Our Thoughts on Dawn of Egypt

Dawn of Egypt is yet another very playable Ancient Egypt Play’n GO release. I guess if a theme or a model is working for you then the familiar refrain “If it ain’t broke, don’t fix it” is a good enough reason to keep on using it. People often find comfort in the familiar and Play’n GO seem to have worked out that if you change up the formula a little each time, you have a willing audience ready and waiting to patronise your new slot.

The game was actually more fun to play than I has anticipated, and the stacked high value symbols helped me land a fair few big base game wins. This made the occasionally interminable wait to trigger free spins much more bearable. The free spins themselves were a real mixed bag; this isn’t a free spins round where you know you’re going to get a big pay-off. Spin a meagre number of spins and you can leave them frustrated and not much wealthier. However, if you land those Pyramid Spins and get on a retrigger roll then this can pay very, very well. Forget the 1,000x max win – that is only per spin, and as you know this game can reward plenty of spins if it’s in the mood.

Dawn of Egypt is, as with many of these types of slots, a simple game with decent potential, and if PnG keeps tweaking the formula, there’s still a little life in the old dog yet.