Yggdrasil is renowned for the great design of their slots, but even for them, Dark Vortex is mind-blowing. From the almost cinematic intro which takes you through the creepy and deserted ruins of a former fortress under attack from a huge compound eyed, multiple-tentacles beast, through to the superbly detailed game board framed by an arched stone structure replete with ghoulish stone gargoyles, monsters, skulls, and spellbooks. The sinister soundtrack ably accompanies the visuals in creating a truly authentic hellscape.

Equally impressive are the symbols. The 5 low-value symbols are represented by five different coloured spell books with five similarly coloured hell-like monsters with the red she-devil symbol the most valuable with five in a row earning 6x the spin-stake. As well as the wild symbol (a gold brick emblazoned with the word ‘wild’) and the scatter symbol (a swirling gold disc known as a Vortex scatter), there are also Pink and a Blue Orb symbols which add to wilds and free spins in the bonus rounds.

Dark Vortex’s special features revolve around the accumulation of the Vortex scatters which initially open up the Vortex feature, but with luck on your side you may make it through to the hallowed ground of the free spins. 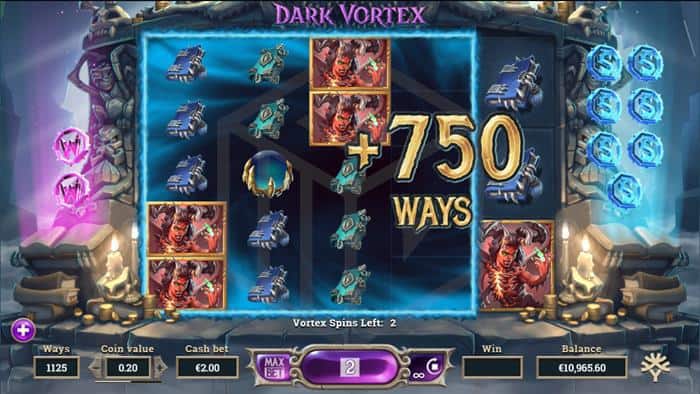 If two Vortex scatters appear on adjacent reels, you will be awarded 3 free spins, and the 3 symbol reels on which the scatters appeared will be sucked away into a swirling vortex in space and replaced by two 5 symbol reels, immediately increasing the ways to win from 243 to 432. If, during your free-spins another Vortex scatter lands adjacent to either of the two already expanded reels another 2 free spins are awarded and another Vortex reel is created. If you manage to make all five reels Vortex reels, then you have earned free-spins and open up all 3,125 ways to win. Vortex reels also offer more stacked symbols and wilds than regular reels.

Throughout the Vortex feature Blue Orbs may appear on reels 2-4, and each one will add to the potential number of free spins you will be awarded if you reach that feature (you will automatically receive 5 free-spins upon reaching the feature regardless of Blue Orbs. Also, each Pink Orb which land on Vortex reels 1 and 5 during the Vortex feature will add an additional layer of 3 consecutive wilds across reels 2-4 if you reach the free-spin feature. Will stacked wilds, symbols, and a 5 x 5 board you can look forward to boosting your balance considerably.

Just below the bottom left of the game board is a ‘Buy A Bonus’ button which allows the player to immediately bypass regular gameplay and head straight to the main free-spins game. At 80x the spin-stake the button comes at quite a cost, although the hardened action junkie might be tempted, especially at the RTP is increased from 96.5% to 97% for anyone brave enough to Buy A Button.

Our Thoughts on Dark Vortex

Dark Vortex is a superb addition to Yggdrasil’s catalogue. Stunning visuals, a great soundtrack and immersive gameplay are the order of the day here. The standard symbol wins are small, but with stacked reels and so many bet-ways, wins of some variety come in thick and fast. Furthermore, the Vortex feature comes around relatively frequently, which stops the game becoming boring and monotonous. The free spin feature, however, takes some work to get to, although with the potential wins up for grabs that aren’t particularly surprisingly – and when a single spin could potentially net you a return of 7,318x your spin-stake, those free spins are definitely worth playing for!

If you are specifically looking for a slot which offers a feature buy but Dark Vortex is not to your liking then click on the following link buy bonus slots.