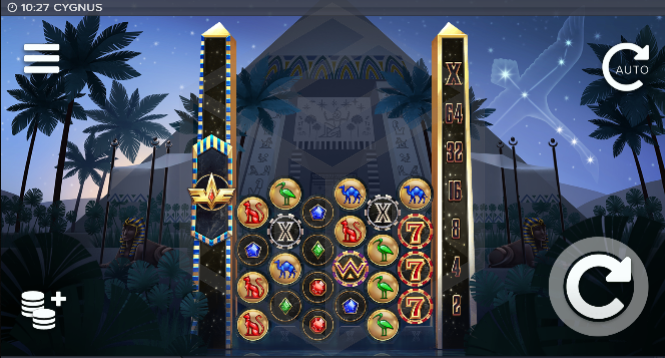 The word Cygnus is derived from the Greek word for swan. This is also one of the most famous constellations found in the north. This constellation can be seen as a bird with a long neck and it's winds spread out. At the same time, this same image takes us into ancient Egypt where the same imagery can be found, it is actually aligned perfectly with the pyramids in Egypt. While loading Cygnus, you will be transported to the river Nile where the entrance to one of the ancient pyramids is set as the background. Of course, you will see the Cygnus constellation in the sky while palm trees and statues surround the temple.

Symbols in this slot will appear in the shape of circles as they will be rolling into the empty positions. The lower value symbols consist of green, blue and red gemstones. These will be rewarding you with 0.2x to 0.3x your bet for six of a kind. Other symbols on the reels include Ibis birds, the goddess Bastet and blue camels. For six of a kind of these, you will be rewarded with a win between 0.8x and 3x your bet. The symbol of the highest value is the lucky 7, giving you 30x your bet for six.

A symbol marked with the letter «W» is the wild symbol of the game, with the ability to substitute all other regular symbols. The scatter symbol simply shows the Cygnus logo. A final symbol showing the letter «X» will increase the win multiplier should it reach the bottom of the reel.

As well as the mechanics of the slot, the different extra features are a big part of what makes Cygnus a fun choice. You will find the avalanche feature, free spins feature as well as a progressive win multiplier.

Similar to other slots from ELK Studios, Cygnus offers an Avalanche feature. Every spin that results in a winning combination, the symbols that make up the win will explode and disappear from the reels. New symbols will then roll into place to fill the empty spaces, giving you another chance at winning.

This avalanche feature will continue as long as new winning combinations are being made and with every time, more rows of symbols are added. A maximum of 8 rows is on offer. 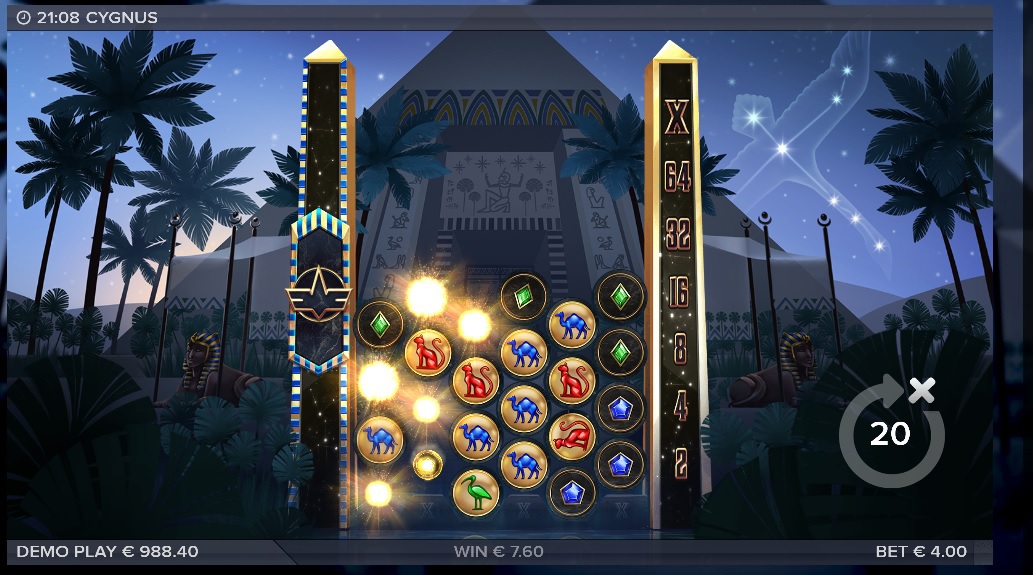 The «X» marked symbols can show up on the reels at any given time during a spin. They will be responsible for activating the multiplier shown on the right side of the game window. This will only happen if they should fall to the bottom row within one spin. For every «X» symbol on the reels, the win multiplier will be increased by 2. It will start out with an x1 multiplier, increasing to x2 for one «X» symbol and then increasing to x4, x8 etc for the second and third one. This can be increased up to x64.

This free spins feature is without a doubt the best feature in Cygnus. With just one of the scatters appearing anywhere on the reels during a spin, the bonus mode will be triggered. The round will start with 7 free spins if it slides over to the left pillar by the end of the spin. This feature can be retriggered indefinitely as long as the scatter symbol appears during a free spin and again slides over to the pillar on the left side.

All the free spins during this round will be played on the game window with 8 rows and 262 144 different ways to win. Should any multipliers land on the reels, they will remain on the screen and then drop down to the bottom. Multipliers will not be reset but will increase to the maximum of x64 where it will remain till the end of the round.

Our Thoughts on Cygnus

Overall, Cygnus is a well-designed slot with plenty of great animations and fun graphics to enjoy. The reel mechanics are innovative and a great change from what we usually see. However the potential wins aren't the best we have seen from ELK studios, but a maximum win of x5 000 is certainly nothing to complain about. The soundtrack sets the mood for the game and while the different features aren't necessarily original, together they offer something quite unique.