Creature From the Black Lagoon

Play Creature From the Black Lagoon on

Creature From the Black Lagoon does an excellent job of recreating the look and feel of the original movie in animated slot form with great attention to detail with both the characters from the film as well as the symbols and artefacts – and the introductory and pre-bonus animated video clips are superb and ‘shot’ in realistic grainy, black and white film-like footage. The soundtrack is also in keeping with the theme, calm and almost serene but with a hint of menace in the base game, but ramping up in tension during wins or in the bonus rounds. Certain actions will also trigger short bursts of dialogue from the original movie. 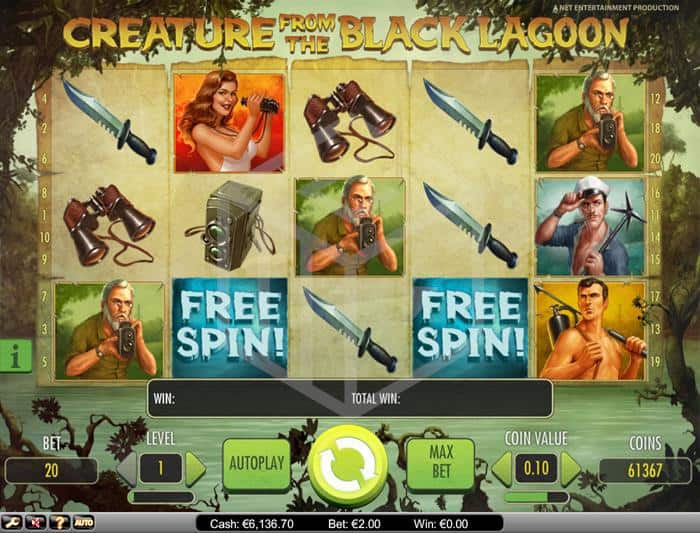 The Creature from the Black Lagoon takes place overlooking the banks of the eerie lagoon, with overhanging trees cradling the game board. The lower value symbols are represented by a knife, a vintage camera, a diver’s gas tank, and a pair of leather-bound binoculars, while the higher value symbols are characters from the movie, Lucas, Carl, David, and Kay. The wild symbol is the game’s logo which changes to the word WILD after landing and the scatter is simply an aquamarine block baring the words FREE SPIN! Hit a big win and you’ll see the superbly detailed and scary looking Creature rise up from the bottom of the game board.

The wilds in Creature From the Black Lagoon can produce big wins in both the base game and the free spins round. Every wild which lands becomes sticky for an extra spin, and if you land another wild during this spin then this will also become sticky and you will receive another spin. This will continue until you fail to hit a new wild. These wilds become even more lucrative in the free spins round. 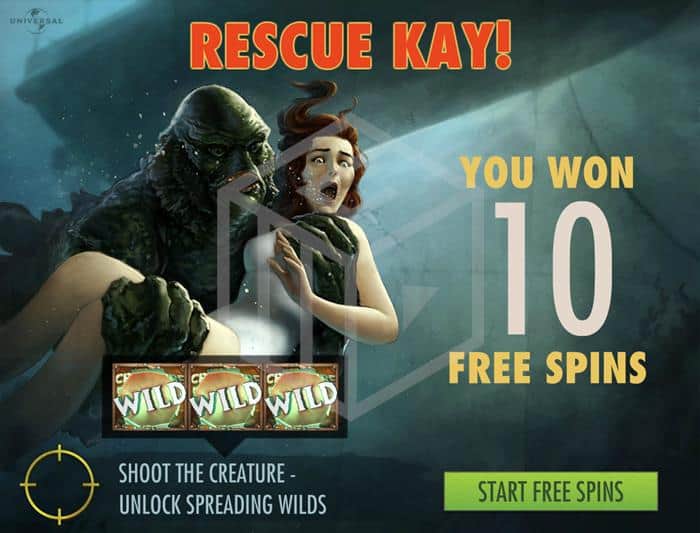 Hit 3, 4, or 5 scatters to earn 10, 15, or 20 free spins. During the free spins, the wilds become even more valuable depending on how often you manage to harpoon the Creature. Every time a target appears on the reels you will successfully shoot the Creature and take one bar off his life meter which is to the bottom right of the reels. As in the base game any wilds are sticky for one respin (unless you hit another wild and continue to spin) but harpoon the creature 3-5 times and any wild will not only become sticky but it will also spread across the reel one place to the left. Hit the Creature between 6-8 times and every wild will become sticky and spread one place to both the left and the right. If you manage to hit the Creature 9 times you’ll empty his life meter and get 10 more spins whilst retaining the sticky, spreading wilds. 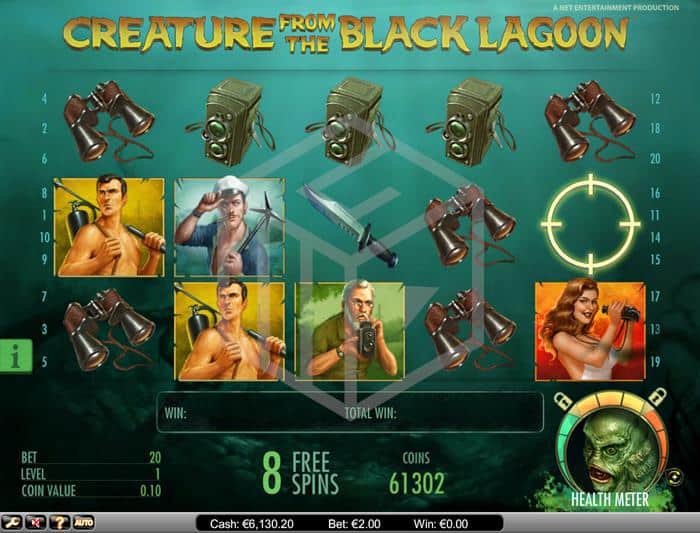 Creature From the Black Lagoon has worn well since its release in 2013, hardly surprising considering the movie is a timeless classic. The design and graphics are superb throughout and for a high volatility slot you seem to get a decent amount of time in the features. Sticky wilds are always an exciting feature, but as the wilds in Creature From the Black Lagoon also spread left and right during the free spin round, you can expect some nice big wins if you reach the bonus round – especially if you’re able to retrigger for extra spins. Another really great effort from Net Ent.