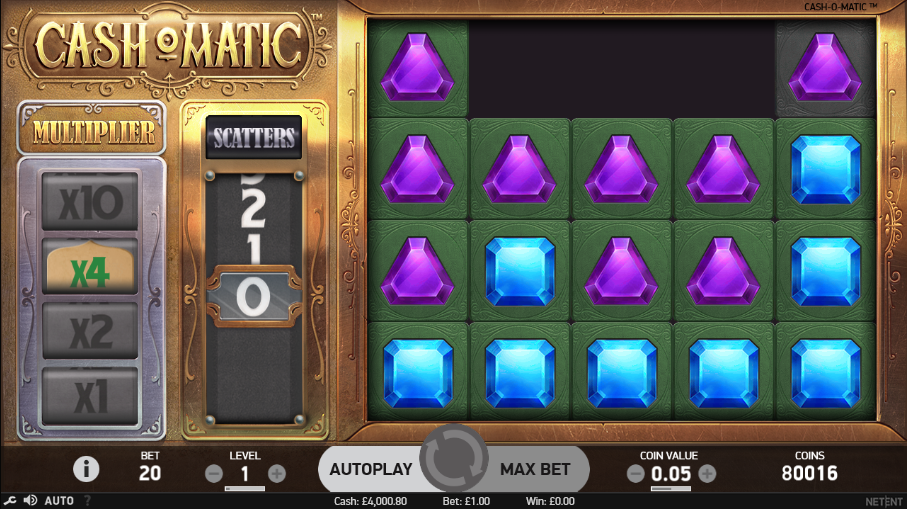 As mentioned above, the design, according to NetEnt’s blurb is designed, “with the look of an old-style cash machine.” The 5x4 reel set occupies roughly 60% of the gameboard. To the left of the reel set are two separate reels; the ‘Multiplier’ and ‘Scatter’ reels which keep a note of the number of either win multipliers or scatters you have at any given time.

Both the reel set and the two counter reels are framed by a brass border with intricate detailing. In fact, the detailing and lettering resemble something out of a Wild West slot – certainly something very old school. This somewhat mystifying design is at least consistent with the soundtrack which wouldn’t seem out of place at a spit and sawdust saloon.

Low-value symbols are the standard Royals 10-A. High-value symbols take the form of different coloured gems. In ascending order of value they are; purple, blue, green, orange, and red. 5 red symbols on adjacent rows pay 20x the bet size. There is no wild symbol but there is a diamond scatter symbol.

The reel mechanic for Cash-O-Matic the “Avalanche Mechanic” is similar to most cascading reels mechanics in that after a win, some symbols are removed and are replaced by new symbols “Avalanching” from above.

You must activate free spins by accumulating at least 10 scatter symbols during any single game. Scatters often appear stacked on the reels and, unlike winning symbols, they are removed individually from the board and replaced with an avalanche symbol.

As they often appear stacked, scatters landing on the top rows are often replaced with more scatters. The number of free spins awarded is equal to the number of scatters accumulated during the spin. As there are 18 scatters on each reel it is theoretically possible to earn 90 free spins – although this is incredibly unlikely.

However, 20+ free spins, although difficult to reach, is a more realistic possibility. Also, every completed row awards an additional free spin. The more scatters you begin free spins with, the higher the multiplier for each full row of winning symbols. Multiplier levels awarded for numbers of free spins are shown below:

I have to admit that at first Cash-O-Matic was in for a dreadful review. The design was competent but fairly basic and a little dated. On top of that gameplay appeared confusing and, at times, interminable. Add to that a lack of features and I was beginning to wonder why this slot existed.

Thankfully this was only until the game started to make sense, and now I really don’t see why I was confused at all, so simple is the mechanic. It’s also actually a pretty entertaining game with a lot of potential for some cracking wins. Ok, so maybe 2000x isn’t up there with some of the other high variance slots maximum wins.

However, enter the free spins round and you have a much better chance of a win of several hundred times your stake than you do playing most other games.

Above all else, credit has to be given to NetEnt for continuing to innovate. It’s true that this isn’t the first time cascading or ‘Avalanche’ symbols have worked this way, and it’s not as if we haven’t seen increasing win multipliers before.

However, this is the first time they’ve been presented in such a way and despite my reservations, it all comes together nicely in Cash-O-Matic.

That’s not to say that this game isn’t without its faults. It can still get fairly laborious if you’re playing to get into the lucrative free spins round, especially where the scatter symbol is concerned. You can speed up the spins by double-tapping the play button, but there is no way to speed up the tedious one-by-one removal of scatter symbols and the very slow avalanche replacements.

This is particularly frustrating when no wins are in view and a random single scatter appears on the later reels. When this occurs you know there is no realistic way you’ll reach 10 scatters yet often have to wait up to a minute as the scatter replacement cycle plods along.  If NetEnt address a few teething issues I would have no hesitation in recommending this slot.