Carnival Queen by Thunderkick released on 07.02.2019 is a 6-reel & 4-row online slot with 4 paylines and a 96.1% RTP. This is a carnival-themed game offering players a max win of up to 22700x their stake. Carnival Queen can be played on all devices from €0.1 to €100 per spin and is considered a medium volatility game. 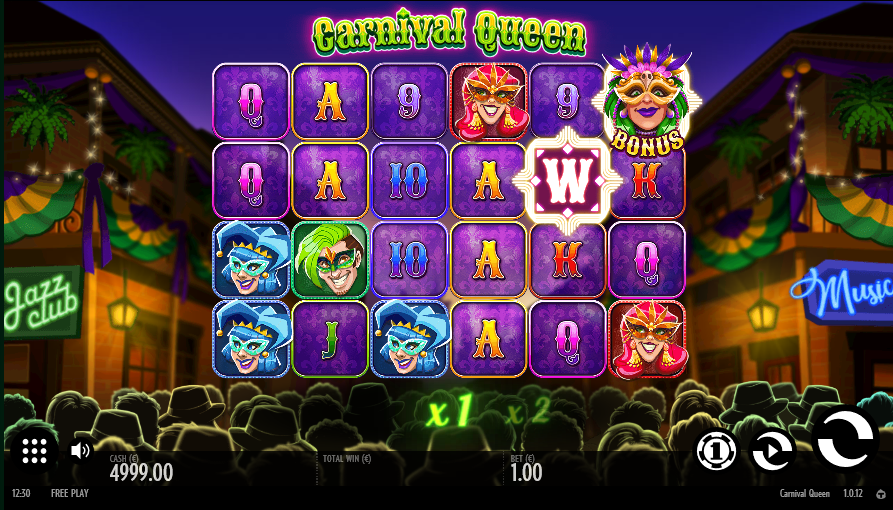 Thunderkick’s art department has done another great job on the design, beautifully capturing the ambience and revelry of the Carnival. Set during the evening festivities on a bustling New Orleans Street, a packed crowd of revellers nod appreciatively to music blasting from the illuminated, brightly coloured buildings either side of the thoroughfare. The purple game board sits centre stage with a cast of colourful characters spinning to the upbeat tunes which accompany play.

Low-value symbols are the standard 9-A Royals. Medium paying symbols are represented by 4 colourfully costumed Carnival-goers (wearing blue, green, yellow, and red). The highest value regular symbol is a glittering crown which pays 20x stake for 6 across a pay line.  The scatter symbol is the Carnival Queen herself. 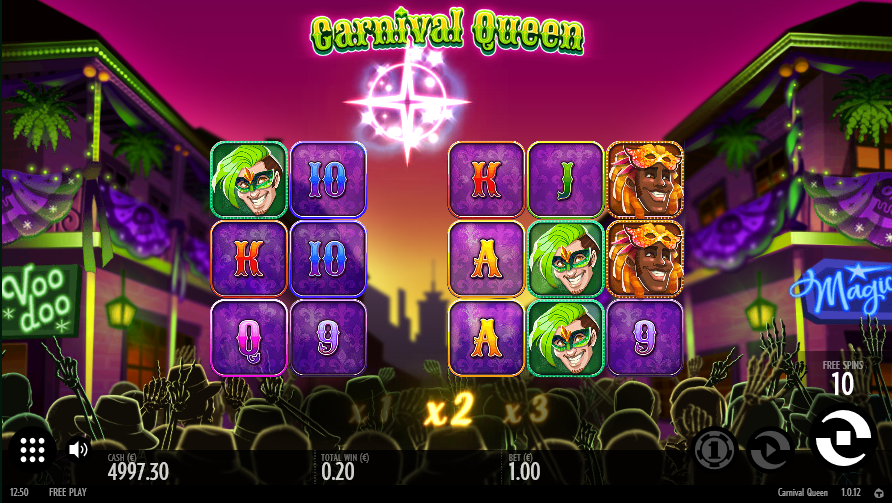 Rather than spinning, Carnival Queen’s reels cascade into place rather like rocks tumbling in an Avalanche (hence the feature name). After a win lands the symbols making up the win disappear and new symbols ‘Avalanche’ down to take their place. If a new win is created the cycle will repeat and will continue until no new win appears, at which point a new spin will begin. 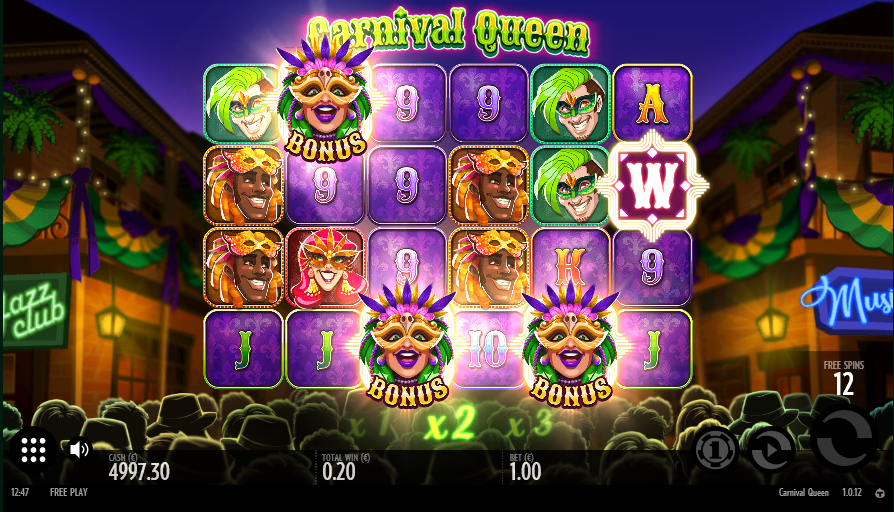 Free Spins are triggered by landing 3 or more scatter symbols for a minimum of 12 spins. Any scatters above 3 will add an additional 4 free spins. During the bonus round landing 2 scatters will award a further 3 free spins, with any additional scatters awarding 3 additional free spins.

During the bonus round the Avalanche feature win multiplier will not reset at the end of a winning streak. This will result in much bigger wins, especially towards the end of the round where the multiplier will often reach a decent double figure.

Another benefit of the free spin round is that if a wild symbol is present on the reels after a losing spin then it will eliminate every symbol on the same reel and row. New symbols will then fall into their place offering a further opportunity to land a winning combo and start the Avalanche feature.

Carnival Queen is a great slot for Thunderkick to start their year off with. It has great visuals, a funky and fun theme, some popular features, and with a 22,700x stake win possible it clearly has awesome potential.

However, given that this is only rated medium volatility (Thunderkick rate it 47/100 for volatility), the chances of getting anywhere near the maximum win are extremely scarce, to say the least!

Personally I would have preferred higher volatility to give Carnival Queen a little more edge, but as mid-range slots go, this is a good one.

Cascading (sorry Avalanche) reels with increasing reel multipliers always seem to go down well, and Thunderkick has served up their own take on this familiar mechanic with aplomb. There’s nothing ground-breaking here, but nevertheless this is a great addition to Thunderkick’s portfolio.