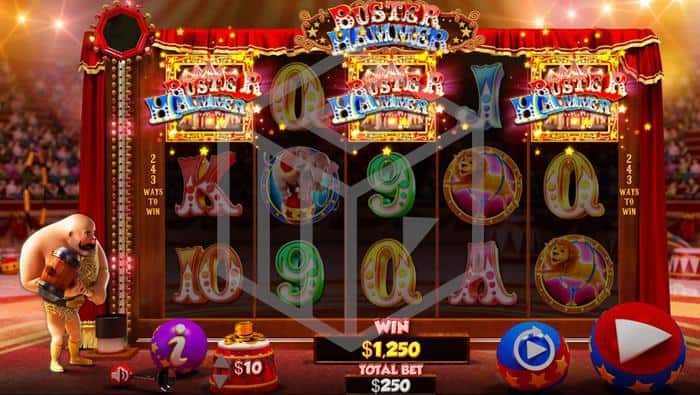 Buster Hammer is a great looking slot packed with bright and colourful 3D animations set inside a packed big top circus. The game board takes centre stage draped in red velvet curtains with the varied and colourful symbols on a dark translucent background. Buster stands to the left of the game board dressed in his fetching leopard skin strongman garb, complete with a shiny bald head, bulging muscles, handlebar moustache and hammer ready to swing for the illuminated ‘test your strength’ meter.  The circus action is ably accompanied by a jaunty circus backing track.

As to the symbols, the low values are represented by the standard 9-A playing cards in colourful circus fonts while the higher value symbols are cartoon images of a Lion, an Elephant, a Seal and Buster the Strongman as the highest paying symbol. The wild is a hammer (which also acts as a multiplier), and the scatter is the game’s logo.

In Buster Hammer, the Wild is more than just your average wild and when  that hammer lands in conjunction with a winning spin then it’s over to Buster to swing his mighty mallet down onto the ‘test your strength’ meter. The power with which he connects determines how big a multiplier will be added to your win and it can be anything between 1x and 5x. If more than one hammer lands in conjunction with a win then Buster will swing twice (once for each hammer) and the multipliers earned will be added together and multiplied by the initial win. 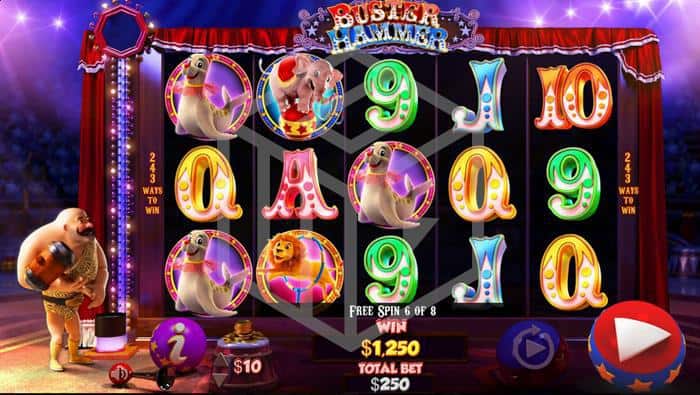 Land 3 scatters and you’ll be given a choice of spins and multipliers as follows:

Theoretically, if you land three hammers all with a 5x multiplier after choosing 4 free spins quintupled this could add up to a huge 75x win multiplier. Unfortunately, there is no way of retriggering free spins.

At any point during the base game, a big cartoon seal might stroll out into the centre of the screen and balance a number of balls on the end of its nose, with each ball containing a cash prize. Depending on whether the hammer multipliers are involved, these could payout up to 75x your stake. 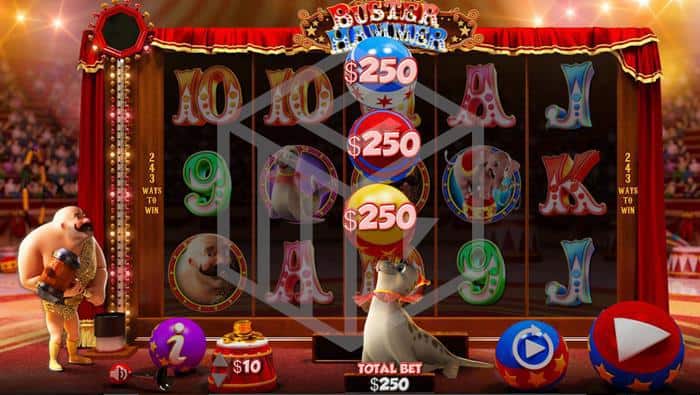 Our Thoughts on Buster Hammer

Buster Hammer has just the right balance of great design, innovative features and decent win potential. It really is a great looking slot and, for a medium/high volatility slot offers enough in the way of features to counter the inevitable dead-spin periods. Any game with free spins and multipliers is always a winner as far as I’m concerned, and during test play, I managed to hit several very decent scores. Perhaps Chance Interactive could have made this game maybe a little more volatile to really attract the serious gamers, but then again with such an attractive and fun looking slot you don’t want to scare off those rec players either, so maybe the middle-ground is where this slot belongs. Either way, I can thoroughly recommend Buster Hammer as a great one to give a try.