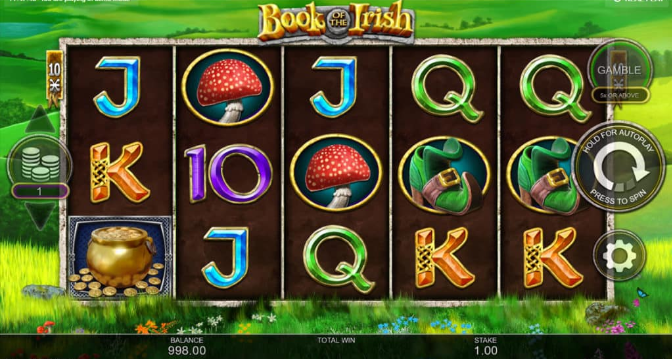 Fourteen years after the release of Novomatic’s Book of Ra, and with 100 clones already in existence, Inspired Gaming has decided to release their very own version; ‘Book of the Irish’. Now, this may not sound like a particularly Inspired move from Inspired Gaming but there just may be a reason to give this slot a try. The first clone to take advantage of the popular Ireland/Leprechaun theme, Book of the Irish was released in May 2019.

The slot comes with a 5x3 reel set, 10 pay lines, and an industry-standard RTP of 96.23%. This is a highly volatile game with a maximum win of 5,000x the bet size and a lucrative bonus round. Free spins with expanding symbols are where the big paydays lie. Unlike other ‘Book’ clones, there is also a gamble feature to potentially increase wins or exchange them for free spins.

You can play Book of the Irish from €0.10 to €50 a spin at participating casinos.

Book of the Irish has a fairly generic Irish themed slot design, set in rolling green fields under blue skies. A green-suited ginger-haired leprechaun with a chinstrap beard and buckled top hat is the game’s hero and highest paying symbol.

The gameboard takes up the majority of the screen and has a thin stone frame.  Fields, bushes, and a lake are visible in the background while toadstools, wildflowers and butterflies decorate the foreground. Traditional Irish panpipe music accompanies gameplay, setting the scene nicely.

The primary special feature in Book of the Irish is the scatter triggered free spins round with expanding symbols. There is also a gamble feature option for all wins of at least 5x the bet size and a Spin Chance feature, another gamble feature for when you’re low on cash.

Landing 3 or more Book scatters awards 10 free spins. Prior to the start of the free spins round one random regular symbol is chosen to become an expanding symbol. When it lands, the expanding symbol expands to cover the entire reel if doing so facilitates a win.

Any win of 5x stake or more activates the gamble feature. The player then has the option to either take the win or gamble for more cash, or for free spins.

The leftmost reel offers the chance to increase winnings by 1/3, 2x, or 3x, while the right wheel offers the opportunity to gamble your winnings up to a maximum of 20 free spins. Naturally the bigger the potential win, the higher the risk of losing.

The higher risk is visually displayed on the gambling wheel with the green ‘win’ segment reducing in size while the red ‘lose’ segment of the reel increases in size.

This last mini-feature automatically activates if your cash balance falls below the cost of spin during the gamble feature. Spin Chance gives you the chance to wager the cash you have left in your account until you have enough for another spin at the current bet size.

Book of the Irish Summary

Considering I’d kind of had my fill of reviewing book clones, I was pleasantly surprised by Book of the Irish. Firstly it came as a surprise when I realised that of all the book clones I’ve played (a LOT) that none of them had taken an Irish theme!

There have been plenty on Ancient Egypt, Medieval England, the ocean, forests, magic, werewolves, deserts, and even Love Island – but not the ever-popular Irish theme. So, my first plaudits go for choosing a theme which should attract some interest among the Paddy fans!

As to the design, it is fairly rudimentary but in keeping with the theme. The gameplay is what you’d expect from any Book of Ra clone, as is the paytable, volatility, and max win. It is the gamble feature which made this clone stand out from the rest.

A gamble feature is always a nice little add-on, but on this occasion, it is much more than that as it gives the player the opportunity to exchange a modest win for a chance of free spins.

As free spins are where the biggest wins will always be found in a Book clone, this is an ingenious feature – a kind of alternative to a ‘buy-a-bonus’ round, only one where you take your chances by gambling rather than immediately shelling out 80 or 100x the bet size.

So yes, I’m happy to recommend Book of the Irish as a worthy addition to any high variance slot fans portfolio.