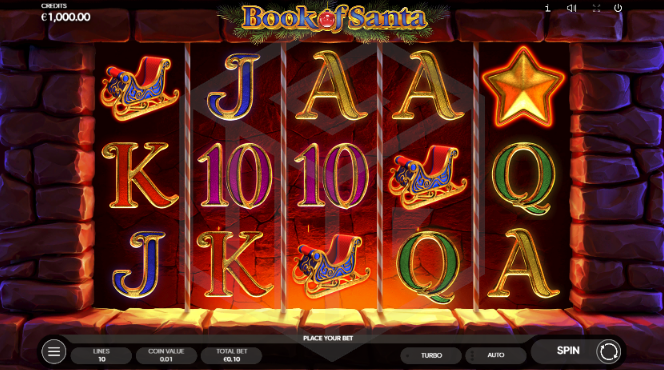 Get ready to be surrounded by all things Christmas in Book of Santa. Completely without and of the hustle and bustle of the festive season, you will be welcomed into Santa's home and placed right in front of the fireplace where the reel set is set up. Of course, Santa Clause himself is there too.

Along with some festive music in the background, the symbols found on the reels have been designed to fit into the theme. The symbols of lower value consist of the standard 10, J, Q, K and A in different colours. As well as these five lower value symbols, you will see Santa’s sleigh, a golden star, a golden bell and Santa himself appear on each their symbol. Santa Clause himself being the symbol of the highest value.

There is just one special symbol in this game. The scatter symbol is shown as a hardcover book, presumably the actual Book of Santa. As usual, the scatter has the ability to substitute all other symbols on the reels, giving you the chance to get even more winnings combinations. It is also the symbol that will trigger the free spins round when 3 or more land on the reels.

We have to admit this part of the slot is slightly disappointing as there is only one main special feature going on in Book of Santa. This is the free spins feature that will be activated by the scatter symbol. However, there is also a risk-game available, giving you the chance to double your winnings up to 10 times. 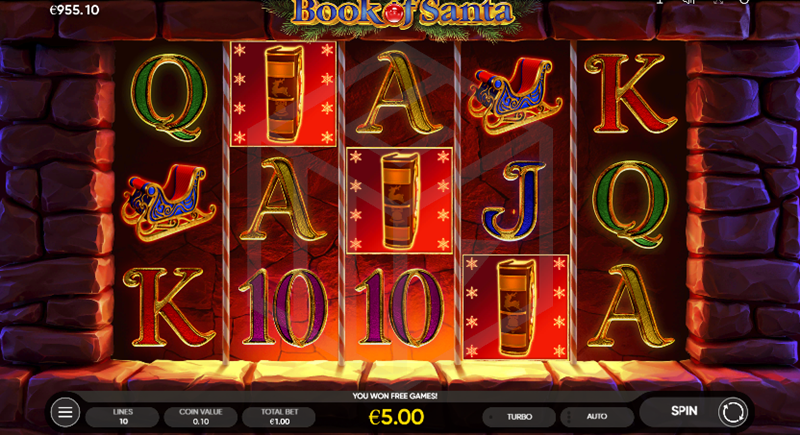 This free spin feature will be triggered when 3 or more scatters appear on the reels. You will be awarded 10 free spins along with a special expanding symbol. At first, a random symbol will be selected and will have the ability to expand. When enough of the selected symbol appears on the reels and a winnings combination is made, all of these symbols will then expand over the entire reel they originally landed on. What makes this feature even better, is the fact that the free spins can be won again while the feature is triggered.

Our Thoughts on Book of Santa

Every Christmas these festive slots always seem to pop up from several game providers and while we all love a little Christmas spirit, the slots rarely seem to really impress. Book of Santa from Endorphina is a good enough slot for a couple of fun rounds, but seeing there are only one (two if you count the game feature) special feature and one special symbol, it can get old pretty quick. The design is decent and there will definitely be some players who find this slot more than good enough, but there are far better releases from this provider.