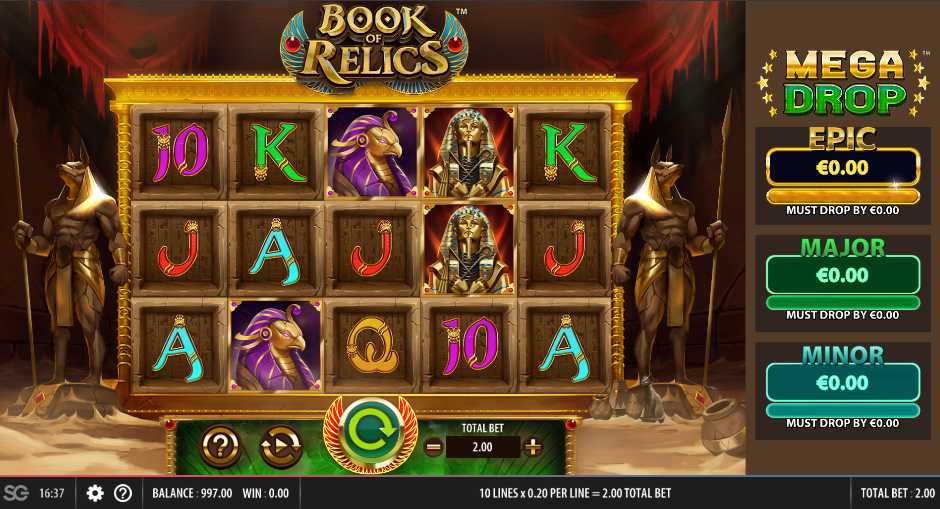 After digesting the title of this new WMS slot (made by Red 7, anyone who has inhabited the online slot scene for any length of time could probably write this review for me.

Yep, you know what’s coming – a review of an Egyptian themed ‘Book of Ra’ clone. Still, there are always newbies joining the ranks of slot enthusiasts a review must be written. Also, this one comes with three progressive jackpots so there is something different to talk about at least!

Book of Relics is a 5x3 reel slot with 10 fixed pay lines and comes with an RTP of 95.25%. It is a highly volatile beast of a game with a maximum standard game payout of 5,000x the bet size. Big wins come from free spins which benefit from an expanding special symbol and the three progressive jackpots.

The design for Book of Relics is passable; familiar, but passable. Either side of the golden framed gameboard stands bronze statues of Anubis. The muscular dog-headed Anubis’ are sporting golden loincloths, bracelets and headgear as well as lengthy spears.

Clay pots, urns and a stone cat lie in the sand in front of the gameboard, while a distressed red curtain drapes behind the reels. The setting appears to be a stone chamber or sorts, presumably in an ancient pyramid.

Landing 3, 4, or 5 Book symbols awards 10, 15, or 20 free spins respectively. Free spins can be retriggered via the same method at any time during the bonus round. Prior to the free spins starting one of the game’s symbols is selected randomly to become your special expanding symbol.

When this symbol lands anywhere on the board, and it can facilitate a win, it will expand to cover the entire reel. Expanding symbol wins do not have to consist of adjacent symbols. For example, if expanding symbols land on rows 1, 3, and 5 then reels with no expanding symbols are disregarded and you will be paid as if the expanded rows were next to one another.

Also, expanded symbol wins do not need to start from the leftmost reel, unlike standard wins. Any additional free spins awarded retain the same expanding symbol.

There are three Mega Drop Progressive Jackpots, the Minor, Major, and Epic Jackpots which are displayed to the right of the gameboard. The Minor Jackpot peaks at €1,500, the Major at €20,000, and the Epic at €200,000.

All three jackpots are funded by player contributions, with 2% of the cost of each spin going towards the jackpots which can be triggered randomly after any spin. Playing at a higher stake increases the chances of a Mega Drop Jackpot.

This is fairly standard “Book” clone fare and as such is no better or worse than many other slots from many other developers. The artwork is perhaps a cut above many of the earlier clones, and the progressive jackpots may garner a little attention.

However, there are no innovations here, nothing which really makes this stand out from its more established rivals. There’s no denying that if you’re a fan of high variance slots then this it is still a game worthy of playing. But when there are so many others offering the same or more, then why would you bother?