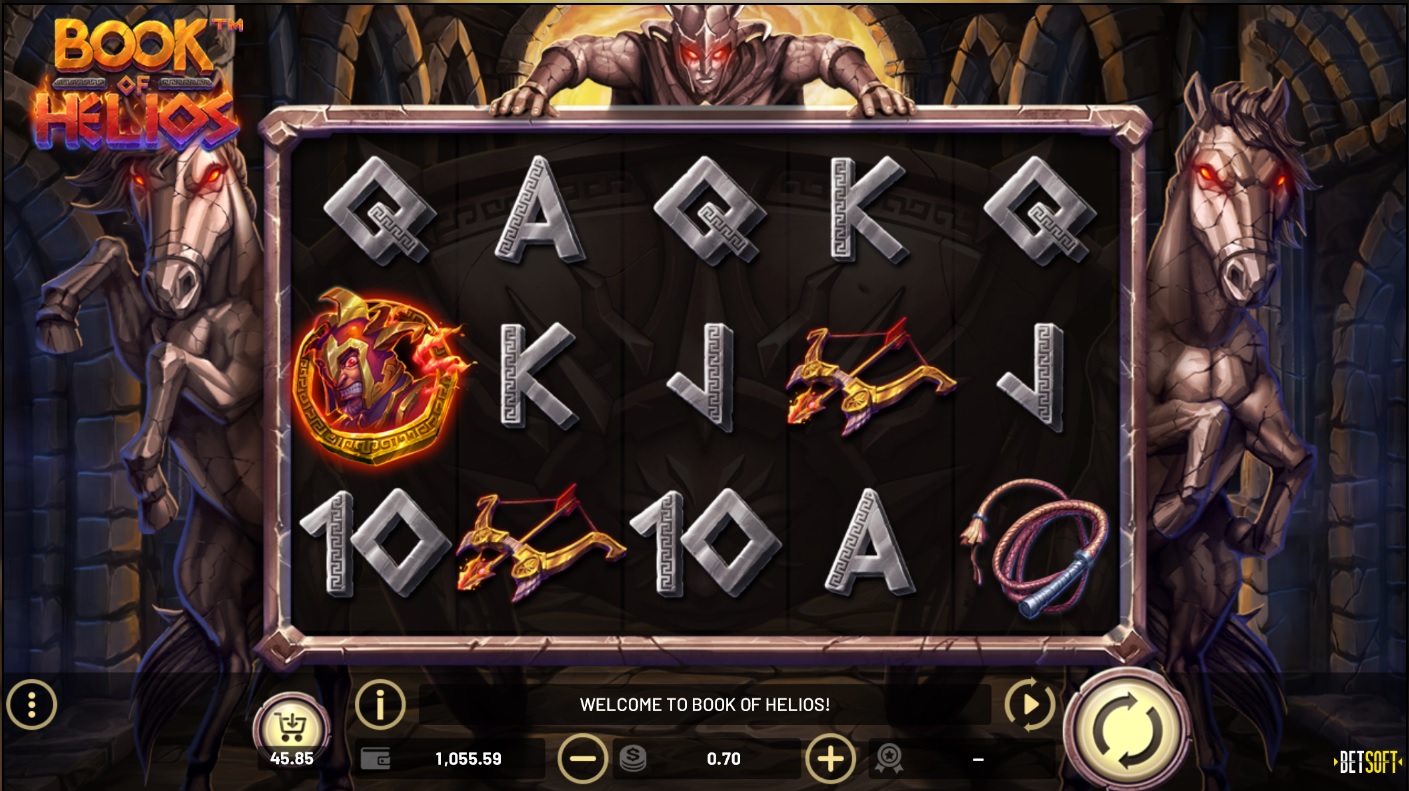 Book of Helios follows the adventures of Betsoft heroine, Olivia Brave. Olivia Brave is a heroine very much in the mould of Red Tiger’s Vicky Ventura or Play ‘n Go’s Cat Wilde. As you might have guessed, Olivia’s quest for riches pits her against Greek Sun God, Helios, as she attempts to infiltrate said solar deity’s temple.

As the title suggests, Book of Helios pays more than a little homage to the Novomatic classic, Book of Ra. While there are now hundreds of such ‘Book clones’ in existence, this is only Betsoft’s second incarnation. Like 2020’s ‘Book of Darkness’, it offers something a little different to a bog standard clone. While roughly mirroring most of the usual ‘Book’ mechanics, the addition of win multipliers in the free spins round enables an impressive max win of some 20,168x the bet size.

How to Win Big in Book of Helios – Free Spins 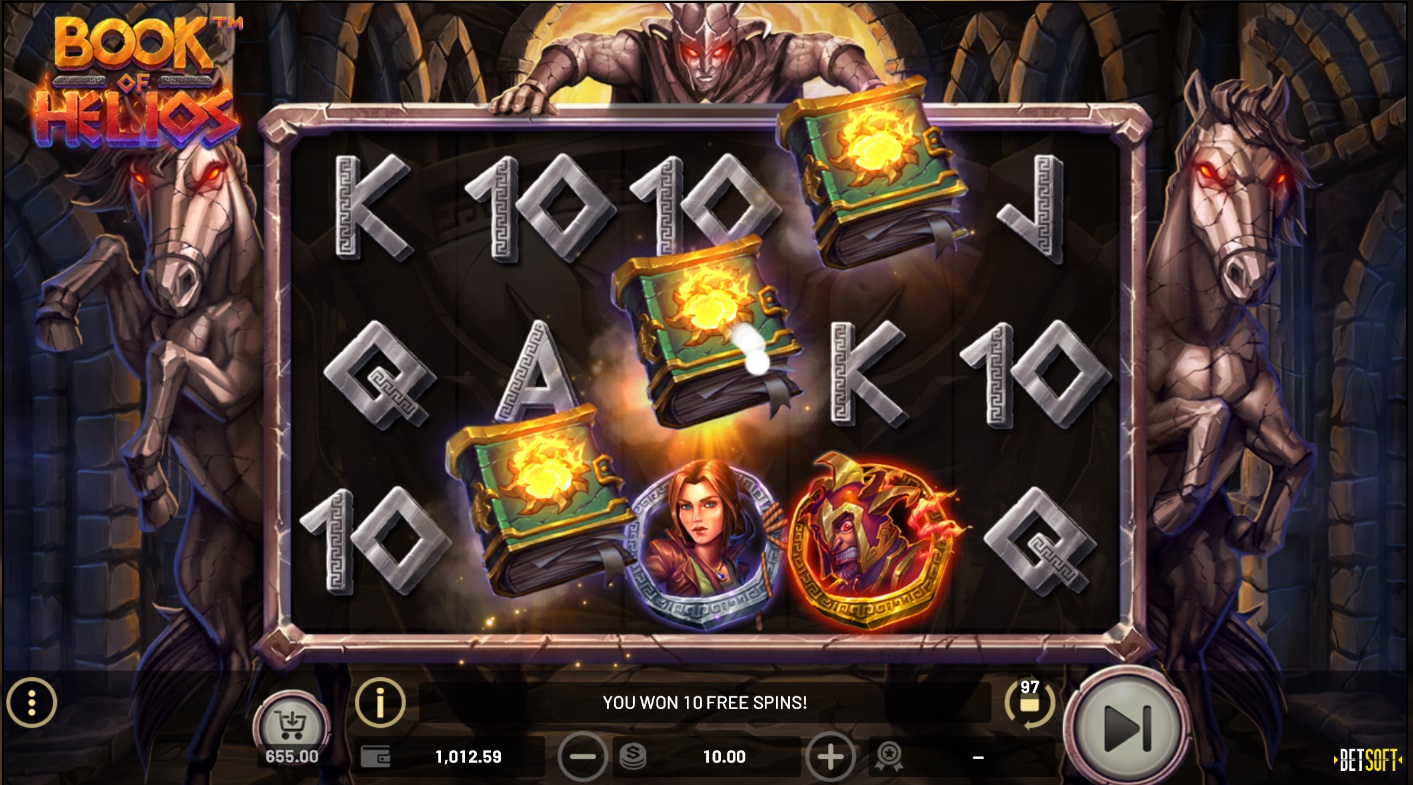 Landing 3 or more Book scatters triggers ten free spins. Prior to the spins starting. a regular symbol is randomly selected to become a special expanding symbol. This symbol expands to cover the entire reel on which it lands if it helps to form a winning combo. Expanding symbols do not need to be on adjacent rows to form winning combos. For example, if the expanding symbol lands on reels 2, 3, and 5, the win is paid as though the first three reels are filled with that symbol. 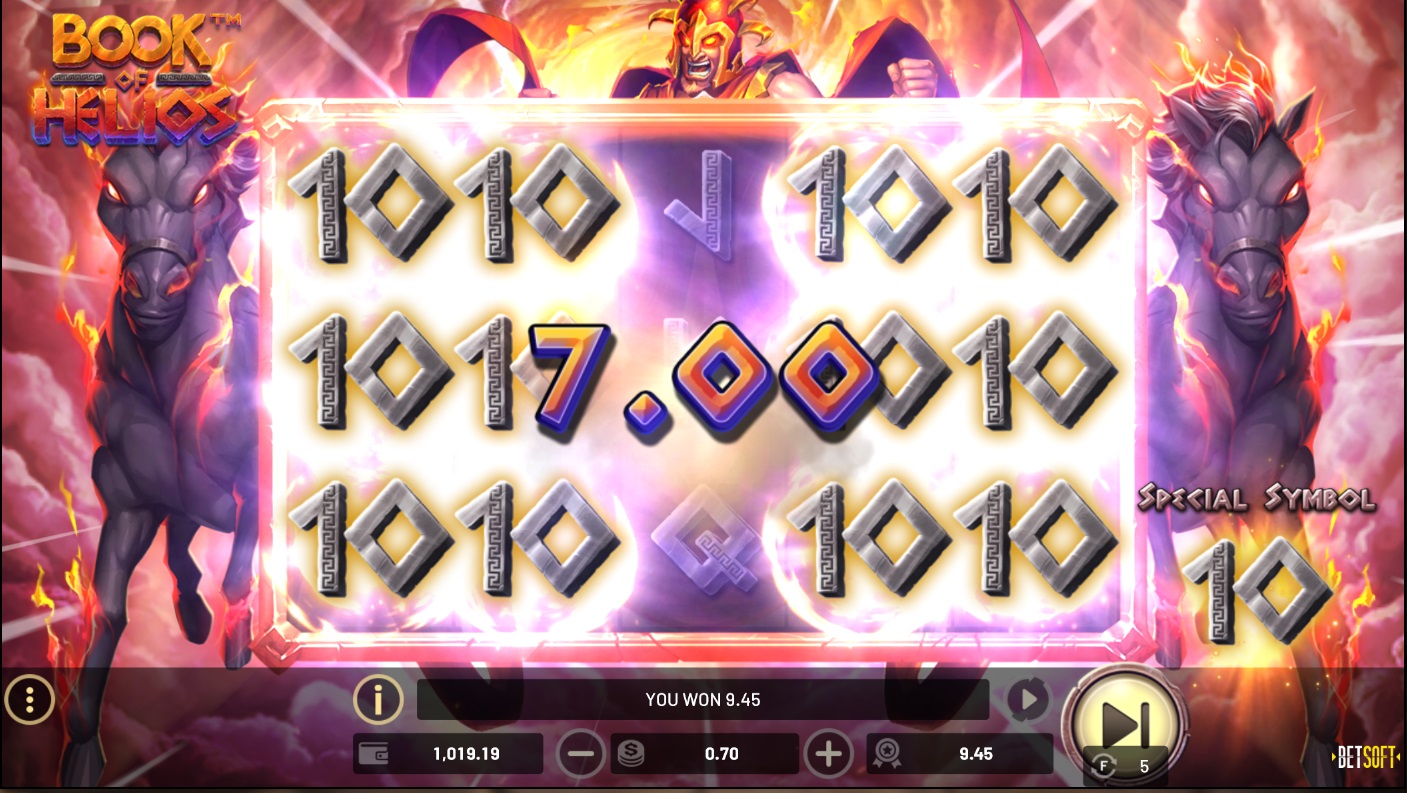 Where Book of Helios elevates itself from becoming just your standard ‘Book’ clone is with the addition of win multipliers. During free spins, the wild book symbol also expands to cover any reel on which it lands, as long as by doing so, it forms part of a winning combination. Not only this, but it is also given a multiplier value of between 1x and 5x. Landing books on 2 or 3 reels which form part of winning combinations have their multiplier values multiplier. For example, landing a book on reels 2, 3 and 4, each with a multiplier of 5x would result in a total multiplier of 125x for the win (5x5x5). This is how wins of up to 20,168x are possible. 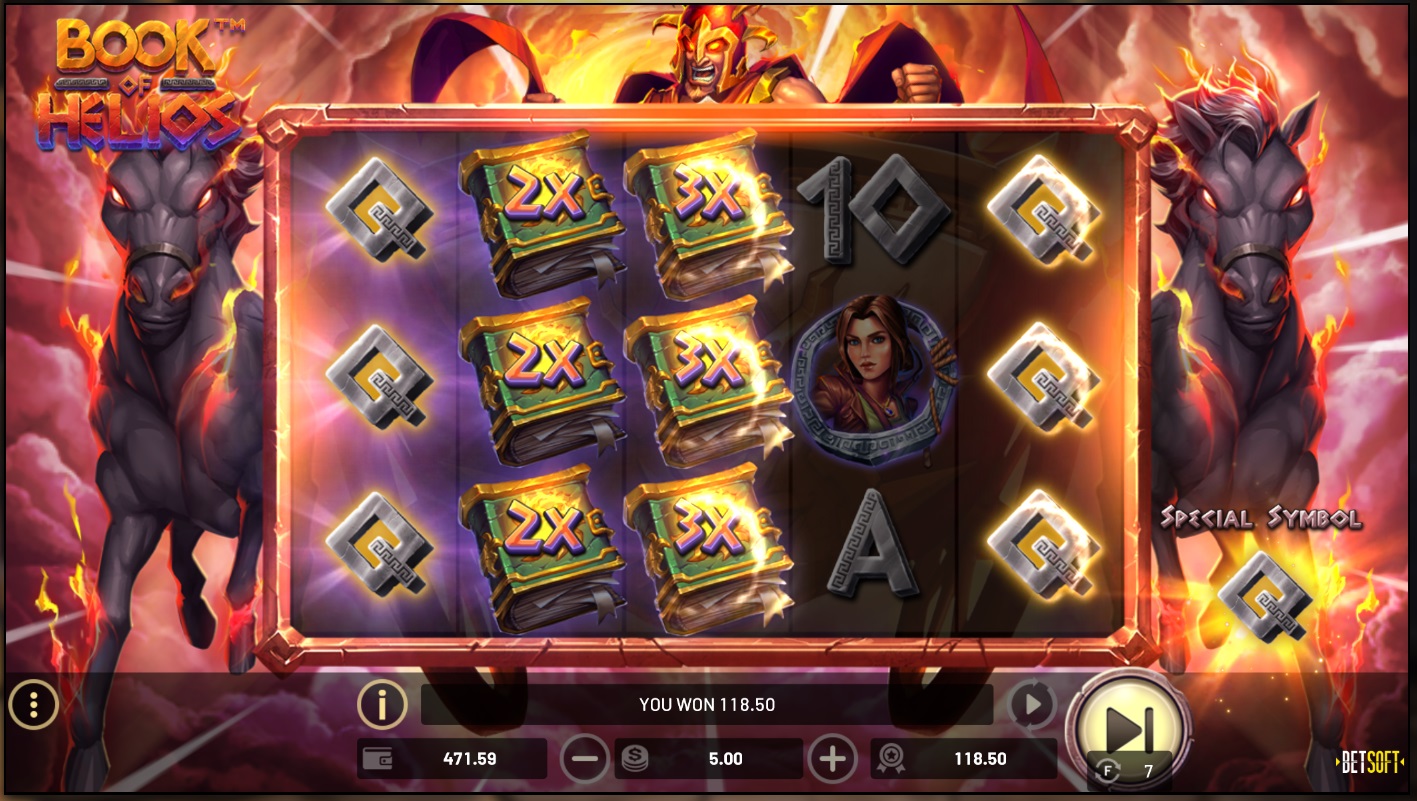 There is no facility to retrigger freespins in Book of Helios. 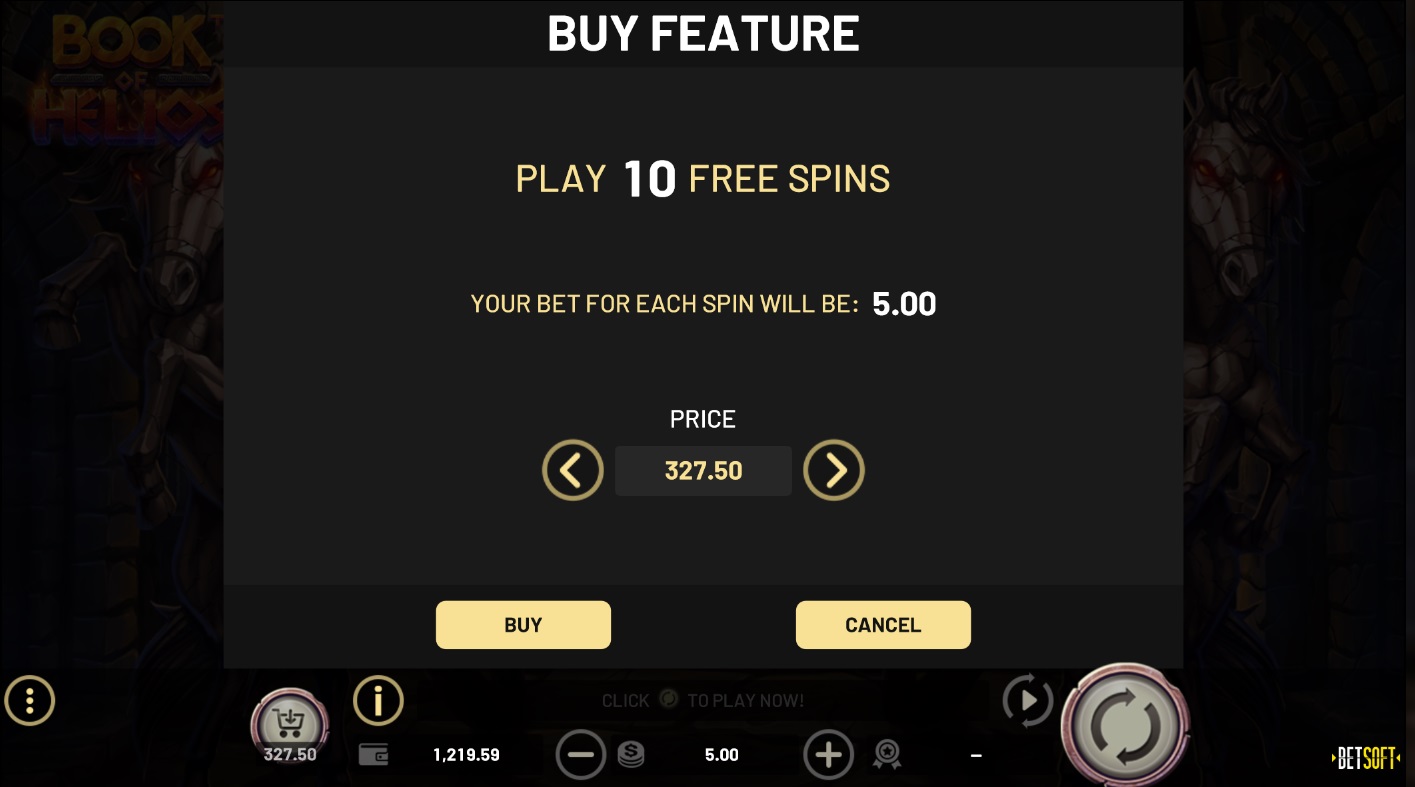 Players in obliging jurisdictions have the option to buy straight into the bonus round at the unusual cost of 65.5x the chosen bet size.

Look and Feel of Book of Helios

Betsoft have produced an impressive looking game, with suitably menacing HD visuals and an epic soundtrack. During the main game, the action takes place inside Helios imposing stone temple. Statues of Helios and his chariot pulling horses peer over and around the reels, their fiery red eyes betraying their otherwise inanimate appearance. Upon reaching the bonus round, however, the ‘statues’ come to life in glorious technicolour. While the reels spin, Helios, “drives his magical chariot across the sky from east to west, searching for heroes to step into the ring of fire with him”

Angular stone-carved symbols 10-A make up the low value symbols. High value symbols take the form of Olivia’s whip, Helios’s bow and arrow, Oliva Brave, and Helios. Helios is the highest paying symbol, with twenty times the bet size awarded for a full payline. See the full paytable below (awards based on a €10 spin). 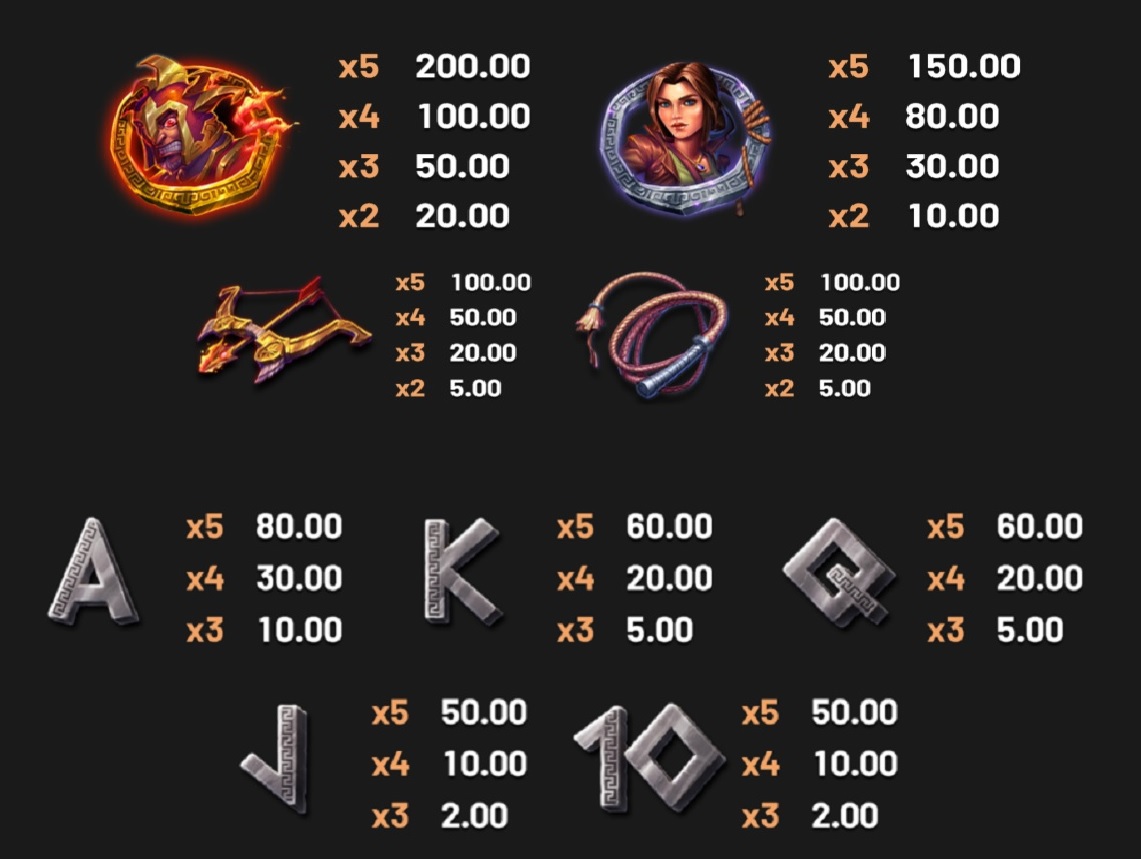 In terms of gameplay, Book of Helios plays out rather like most ‘Book’ slots. It’s highly volatile with only ten paylines, and you’re really only playing to gain access to the free spins. Unusually for a book clone, the book (scatter/wild) symbol only appears on the three middle reels, and therefore cannot create its own win during the base game. As such it is given no value of its own other than acting as the wild. The addition of the win multipliers adds a significant amount of excitement to the free spins, especially as they are so hard to come by.

In summary, crisp visuals, an epic soundtrack, and a max win which eclipses 99% of other book clones should make Book of Helios worthy of attention.