The one small difference between the design of Book of Adventure and Play'n GO's Book of Dead is the background to the large 5x3 game board. Rather than the usual, ‘inside a temple at the entrance of a Pharaoh’s Tomb’ setting, the Book of Adventure chooses an outdoor at sunset graphic with pyramids in the distance and a silhouette of a man riding a camel across the desert. There are, of course, pillars covered in hieroglyphs on either side of the game board – that’s a given. The usual Egyptian-style sounds accompany gameplay.

All the symbols are identical to Book of Dead with 10 – A for the low-value symbols and the higher value symbols are represented by Horus, the Jackal-headed Anubis, an Egyptian Pharaoh, and Stakelogic’s take on the Indiana Jones type Character (named Rich Wilde in Book of Dead) as the highest paying symbol. Get 5 of him on a pay line for a 500x bet size payday. The wild (which is also the scatter symbol) is the Book of Adventure itself. You can earn 200x your bet size for 5 in a row of these, but more importantly, land 3 or more, and you’re taken to the game’s special feature, the Book of Adventure free spins. 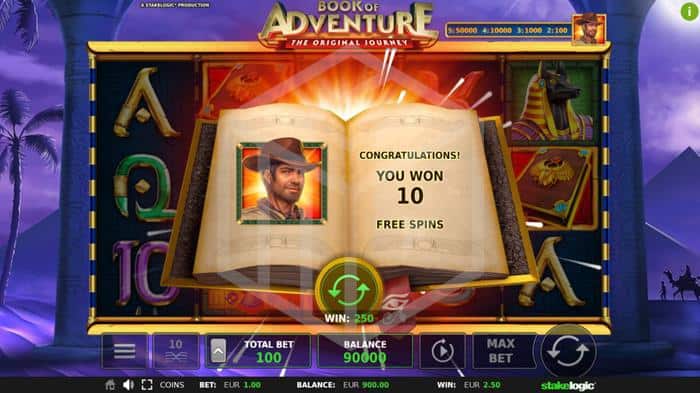 As with your average high volatility slot, players will be relying on landing those Books to enter the free spin round if they want to make some real money. Landing 3 will see you enter the bonus round with 10 free spins. Anyone familiar with these slots will know that before the spins start one of the standard symbols will be chosen to act as a “Special Symbol” which will expand to cover the entire reel if enough land to trigger a win, although with the special symbol they don’t necessarily have to land on adjacent reels. For example, if your special symbol is the Q then as long as 3 Q’s land on 3 separate reels they will all expand and you’ll be paid as if you have landed a 3x3 block of Q’s. The minimum to activate the expanding reels are 2 for the premium symbols and 3 for the lower value symbols. During the bonus round if you manage to land 5 of the highest value symbols on the 5 reels then you’ll hit the maximum win of 5,000x the bet size. Free spins can be retriggered by landing another three Books of Adventure, and you are considerably more likely to land three of those beauties during the free spin round than during regular play. 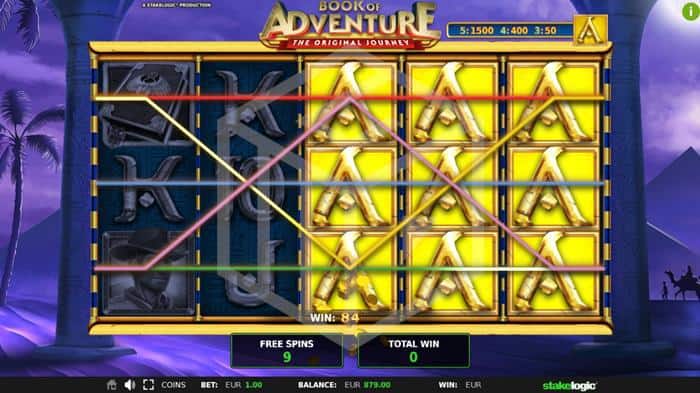 Our Thoughts on Book of Adventure

What to say really? It’s a good game because it’s a near-identical copy of a good game, which itself was a copy of a good game made by the people who started the company who made this copy of the game! It’s even the same down to the two decimal places of the RTP so I guess in theory there is literally no reason not to play it if you’re one of the many Book of Dead fans – but then again there’s also no real reason to play it at all if you’re a Book of Dead fan either!

One final (perhaps intentionally) amusing detail about this game is that the full title is “Book of Adventure, The Original Journey” –   hats off to Stakelogic here for daring to use the word “Original” for the worlds least original game!